A different type of anxiety disorder is panic disorder, characterized by the occurrence of unexpected panic attacks.

A different type of anxiety disorder is panic disorder, characterized by the occurrence of unexpected panic attacks—sudden episodes of terrifying bodily symptoms, such as labored breathing, choking, dizziness, tingling hands and feet, sweating, trembling, heart palpitations, and chest pain. In many cases, the person becomes convinced that she is having a heart attack and is near death. It is no surprise that panic attacks usu-ally include feelings of intense terror and a sense of impending doom (Figure 16.13). 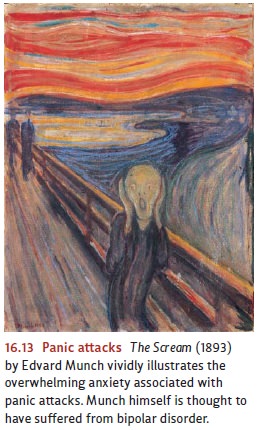 Panic attacks occur in almost all anxiety disorders, so that, for example, a snake-phobia sufferer may have one at the sight of a snake. But the hallmark of panic disorder is that the panic attacks seem to come out of the blue. As a result, the patient often has an intense experience of unreality and fears that he is losing control or going insane. Panic disorder is diagnosed when there are recurrent unexpected attacks and when either behavioral or psychological troubles follow the attacks. Based on those criteria, panic disorder is found in about 5% of women and 2% of men (see, for example, Barlow, 2002).

One person with panic attacks describes her first attack this way:

When I had my first panic attack I literally thought I was going crazy. I was 17 years old and I was the passenger in a car when suddenly I felt my heart racing. I was terrified but I did not really know why. I just had very strong feelings of dread and fear. Almost immediately I felt I needed to escape. . . . The problem was that . . . we were on a winding narrow road leading up [a] mountain. It was very dark and lightly raining.

I began to feel as though I could not breathe. I was trying my best to hide my anguish from my boyfriend. I did not want him to think I was crazy. . . . Although my symptoms were basic textbook panic attack symptoms, at the time this was happening I did not know what panic attacks were. . . . I asked my boyfriend if we could stop the car for a minute but of course he wanted to know why and . . . explained that there really was not anyplace to stop. I truly was trapped in the vehicle.

There was no way that I could explain to him how I was feeling. . . . I remember having flashes of opening my car door and jumping out. I was glad it was dark because I was sure that my fear was obviously showing on my face. My hands were shaking and I felt dizzy. I was not thinking straight; I only knew that I needed to get away from the situation as quickly as possible. (Allen, 2009)

Panic attacks are frightening enough, but even the mere anticipation of the attacks can be awful. Indeed, people with panic disorder sometimes develop a profound fear of having an attack, especially in public places, where an attack might be embarrassing, or in circumstances such as driving, where the attack could be dangerous. As a result, people with panic disorder often develop a powerful tendency not to venture outside their designated “safe” places—their houses or even just their bedrooms. This is why panic disorder is often accompanied by agoraphobia, a fear of being in situations in which help might not be available or escape might be difficult or embarrassing. Agoraphobia can be quite paralyzing, and someone with this disorder might refuse to leave her home for days or weeks at a time (Robins & Regier, 1991).