G protein-coupled receptors all belong to one structural family, which is frequently referred to as the `7-TM' receptor family.

G protein-coupled receptors all belong to one structural family, which is frequently referred to as the `7-TM' receptor family. This name refers to the 7 α-helical transmem-brane domains, which occur in all of these molecules. Vari-ability is larger in the N-terminal and C-terminal parts and the loops intervening between the transmembrane domains, which are exposed to the extracellular and the cytoplasmic spaces, respectively.

The basic mode of action of a G protein coupled receptor and the G protein activated by it is illustrated in Figure 8.1. Binding of the agonist to the extracellular face of the recep-tor triggers a conformational change that is communicated to the intracellular portion of the receptor and there is re-layed to the G protein. The latter is a trimer, comprised of one α, β and γ subunit each. The β and γ subunits remain associated throughout the functional cycle of the G protein. Interaction with the receptor involves all three subunits of the G protein. When the receptor is activated, it will trans-mit its conformational change to G protein. This will trig ger the α subunit to exchange its associated GDP molecule (a leftover from the last round of activation) for GTP, and to dissociate from both the βγ-dimer and the receptor. It will then find and bind to its effector molecule, which will result in either activation or inhibition of the effector. 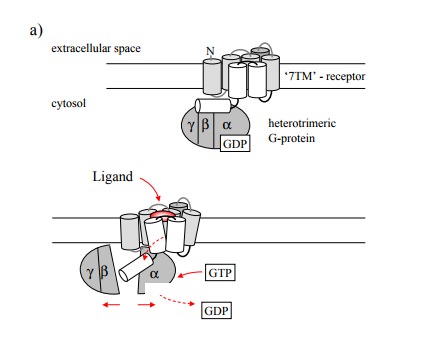 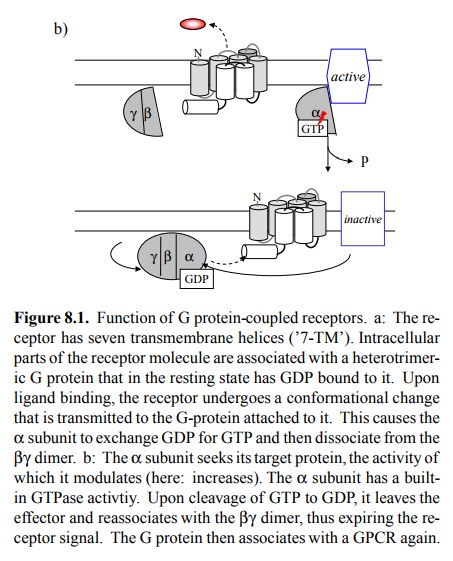 The signal is expired through the intrinsic GTP'ase activity of the α subunit, which after some random2 time interval will cleave the GTP to GDP. This will cause the α subunit to fall back into its inactive conformation and leave the effec-tor, which in turn will resume its previous functional state. It will then re-associate with the βγ dimer to complete the cycle and wait for the next round of activation event by the same or another receptor molecule.

In Figure 8.1a, the effector was shown to be activated by the G-protein. An example of this is the stimulation of adenylate cyclase, which occurs upon stimulation e.g. of β-adrenergic receptors and is mediated by the stimulatory G protein (Gs; Figure 8.2a). Other major effector mechanisms include:

•  The inhibition of adenylate cyclase.  This is mediated by the inhibitory G protein (Gi) α subunit. Triggers for this response include the adrenergic α2-receptor, which is responsible for presynaptic feedback inhibition in adrenergic synapses, and the muscarinergic M2 receptor (Figure 8.2b).

•  Inhibition or activation of phosphodiesterases, in particular cGMP-specific ones.  cGMP (cyclic guanosine monophosphate) is an intracellular second messenger similar to cAMP. Besides activating a group of protein kinases3, cGMP acts directly on several ion channels. 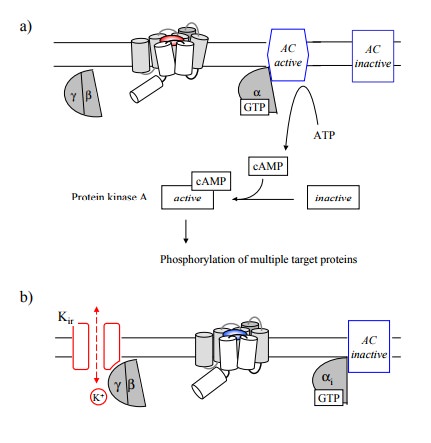 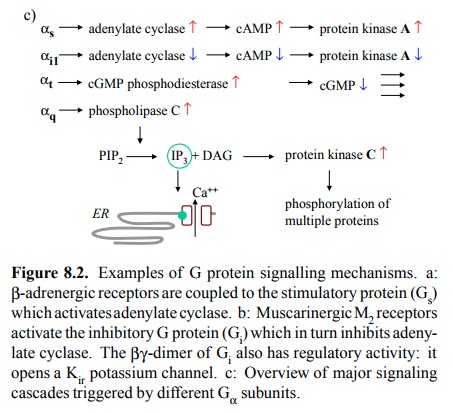 In the rods and cones (visual sensory cells) of the retina, rhodopsin (a particular type of GPCR, activated by light-induced structural change to its ligand retinal) activates phosphodiesterase, which in turn depletes cGMP and thus triggers the inactivation of a cGMP-dependent Na+ channel. This is not of immediate relevance in pharmacology, but it illustrates that G protein-mediated responses can be very fast indeed.

•   Activation        of  phospholipase Cβ (Figure 8.2c). This enzyme  is associated  with the  inner surface  of the  plasma  membrane  and  splits  the  phospholipid phosphatidylinositol-4,5-bisphosphate into diacylglycerol (DAG) and inositol-1,4,5-triphosphate (IP3). Diacylglycerol is hydrophobic and remains associated with the membrane, where it will activate protein kinase C, which in turn will activate a broad and cell-dependent spectrum of target proteins.  IP3  is water-soluble and diffuses across the cytosol to the membrane of the en-doplasmic reticulum, where it will activate a specific ligand-gated calcium channel. Therefore, it will raise the cytosolic calcium level (recall that the concentra-tion of Ca++ is higher in the ER than in the cytosol). This is the major effector mechanism by which trans-mitters, hormones and drugs will promote contraction in the smooth muscle (remember that calcium will induce phosphorylation of the myosin light chain by myosin light chain kinase). Receptors that trigger this cascade include

– The oxytocin receptor, found in smooth muscle cells in the uterus, where it triggers labour.

However, the phospholipase C cascade is not restricted to smooth muscle cells but is ubiquitous.

•     Activation of phospholipase A 2, which releases arachi-donic acid and thus initiates synthesis of prostaglandins and related eicosanoide mediators. Again, we will see more about this in a dedicated chapter.

•     Opening or closing of ion channels. In this way, the `metabotropic' receptors may change the membrane potential as well.

While the more numerous and clear-cut regulatory activities of G proteins are associated with α subunits, the βγ dimers may also influence some downstream effector. An example is the effect of the muscarinergic M2 receptor on the activity of a potassium channel, which, like the one associated with the sulfonylurea receptor, belongs to the `inward rectifier' class. The channel opening effected by the βγ dimer will hyperpolarize the membrane and reduce its responsiveness to excitation.

Table 8.1 lists several transmitters, and their cognate recep-tor and signalling mechanisms. All three of the effector mechanisms listed in table 8.1 for the adrenergic receptors also occur among the `metabotropic' glutamate receptors. 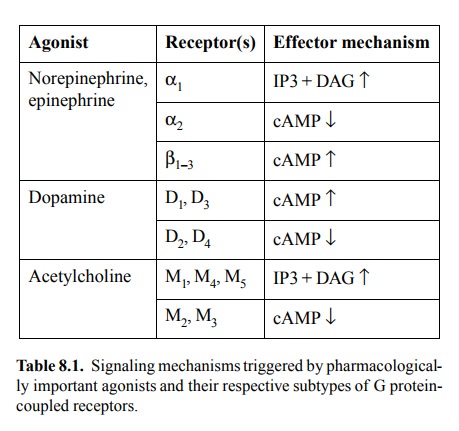