Another drug closely similar to DOPA but used for differ-ent applications is α-methyl-DOPA (Figure 10.19a).

Another drug closely similar to DOPA but used for differ-ent applications is α-methyl-DOPA (Figure 10.19a). This molecule acts in the peripheral autonomous system but also enters the brain, by the same route as DOPA. It is converted by DOPA decarboxylase to the `false transmitter'α-methyl-dopamine. Like dopamine or norepinephrine, α-methyl-dopamine is accumulated inside the transmitter vesicles, and released in response to action potentials. While it has no strong effect on postsynaptic α1-receptors, it does ac-tivate α2-receptors. It will therefore inhibit the further re-lease of transmitter without stimulating the postsynaptic neuron. The effect of methyl-DOPA is augmented by the fact that it is fairly resistant to monoamine oxidase. Its mode of action resembles that of clonidine (which accom-plishes the same in a less roundabout manner). 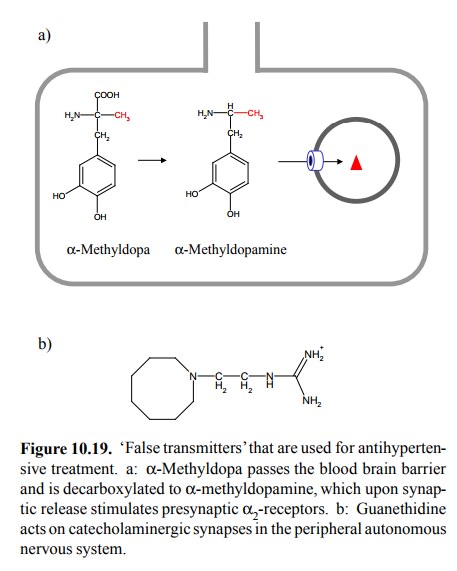 Another example of a `false transmitter' is the drug guanethidine (Figure 10.19b). This drug is quite different in structure from methyl-DOPA. It is therefore not piggy-backed across the blood brain barrier by the aromatic amino acid transporter (nor by any other specific transporter), and since it is polar it does not cross by simple diffusion either. However, it may enter post-ganglionic sympathetic neurons in the periphery by way or reuptake transporters. Accord-ingly, guanethidine can lower blood pressure by a purely peripheral mechanism.