The last group of agents that affect cholinergic synaptic transmission are blockers of cholinesterase.

The last group of agents that affect cholinergic synaptic transmission are blockers of cholinesterase. This enzyme has a catalytic mechanism that is analogous to that of chy-motrypsin and related proteases. In chymotrypsin, there is a `catalytic triad', consisting of a serine, a histidine, and an aspartic acid side chain in the active site. The only dif-ference with cholinesterase is that a glutamate residue re-places the aspartate – and this difference is insignificant, because glutamate and aspartate share a carboxyl group, which is the essential feature for catalysis. 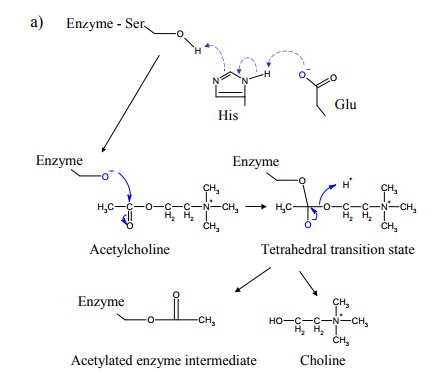 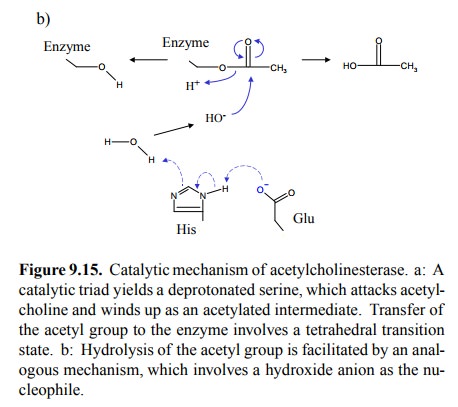 Within this catalytic triad, the glutamate and the histidine residues cooperate to effect deprotonation of the hydroxyl group in the serine side chain (Figure 9.15). The anionic oxygen is a powerful nucleophile that will readily attack the carbonyl carbon of the ester bond in acetylcholine. This will release choline and leave the acetyl group attached (via another ester bond) to the enzyme. In order to reactivate the enzyme, the ester bond must be cleaved again. The nucle-ophile that is utilized in this step is a plain hydroxide anion, generated by the deprotonation of water according to the same mechanism as seen before for the serine.

The two-step mechanism of acetylcholinesterase provides the basis for the mode of action of most cholinesterase in-hibitors. This is shown for the inhibitor neostigmine in Fig-ure 9.16. Initial cleavage of the inhibitor works just fine; however, the carbamoylated intermediate is far more stable than the acetylated one and is only very sluggishly hydrol-ysed to regenerate the active enzyme. In fact, the same re-action as with neostigmine occurs with carbamoylcholine, too. Thus, carbamoylcholine is both an agonist at the re-ceptor and an inhibitor of acetylcholinesterase. After sto-ichiometric reaction of the enzyme with the substrate, any further reaction will be very slow, and since the drug will be present in large excess over the enzyme, carbamoylcholine will appear resistant to cholinesterase. 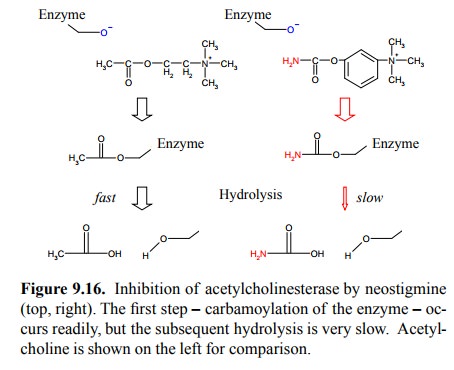 A different class of acetylcholinesterase inhibitors are the so-called organophosphates (Figure 9.17). While acetyl-choline and the carbamoyl-based esterase inhibitors have a trihedral structure at the site of attack (the carbonyl group) and assume a tetrahydral structure only in the transition state of the reaction, the organo-phosphates have a tetrahe-dral structure right from start. Since enzymes commonly have a high binding affinity for the transition state, this explains that organophosphate inhibitors bind very avidly to acetylcholinesterase. They are, accordingly, extraordinarily toxic, and their small molecular size and hydrophobic char-acter enable them to be taken up quickly by inhalation or even across the skin. 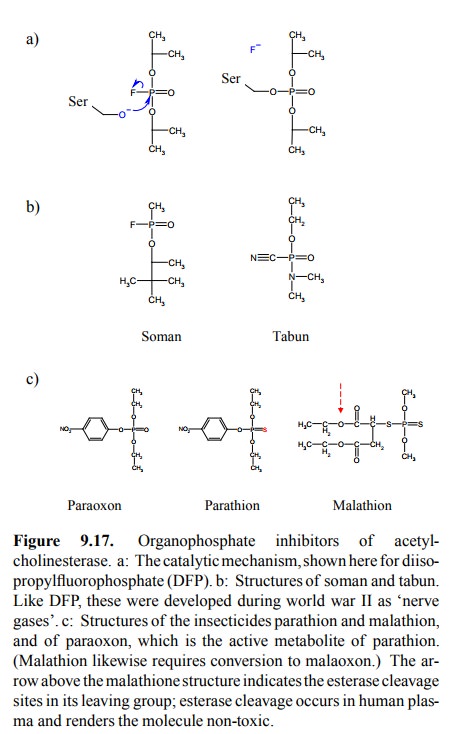 For one of the organophosphates, diisopropylfluorophos-phate (DFP), the reaction mechanism is outlined in Figure 9.17a. Fluorine makes an excellent leaving group and is substituted by the active site serine. It is also found in the `nerve gas' soman. A different leaving group (cyanide) is found in the nerve gas tabun (Figure 9.17b).

Another factor that contributes to the high level of toxici-ty of the organophosphates is the stability of the phosphate ester bond formed with the enzyme: The enzyme does not spontaneously hydrolyse itself, not even slowly as is the case with the carbamates. Reactivation can be accom-plished with an extraneous nucleophile such as hydroxy-lamine (Figure 9.18). While the latter works fine in vitro, it is too toxic for use in vivo. However, analogs such as prali doxime and obidoxime have been developed that steer the hydroxylamine reactive group to the active site of acetyl-cholinesterase. This means they are effective at far lower concentrations and can indeed be used in vivo for the treat-ment of organophosphate poisoning. 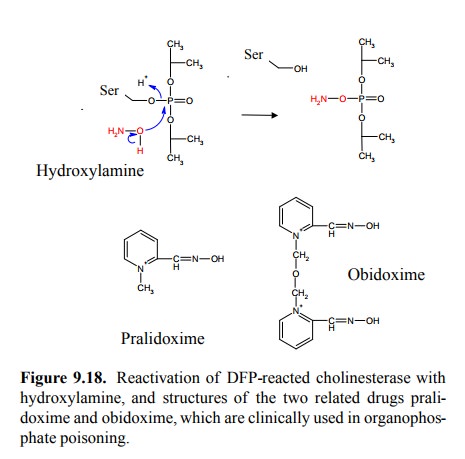 The cholinesterase inhibitors have multiple practical appli-cations – from medicine to warfare. Physostigmine was actually the first practically used cholinesterase antago-nist. To describe its initial use as `medical', however, would mean a bit of a stretch – instead, the seed 18 containing it was used to extort confessions from persons accused of crimes or witchcraft in Guinea. This seed used to be called the `or-deal bean' by the local people.

Physostigmine and other carbamate derivatives such as neostigmine, and edrophonium (which is a non-covalent antagonist; Figure 9.19) are preferred in medicine over organophosphates because of their more controllable (and self-terminating) activity. One important application is in a disease called `Myasthenia gravis pseudoparalytica', which means `severe, quasi-paralytic muscle weakness'. This disease is due to the pathological formation of neutral-izing (i.e., inactivating) antibodies against the NAR of the muscle cells. The post-synaptic membranes will then be- come less sensitive to the acetylcholine stimulus. Prolonga-tion of the lifetime of acetylcholine by partial blockade of cholinesterase is used (with varying success) to compensate for this. Another application is in glaucoma, as described above for direct cholinergic agonists. 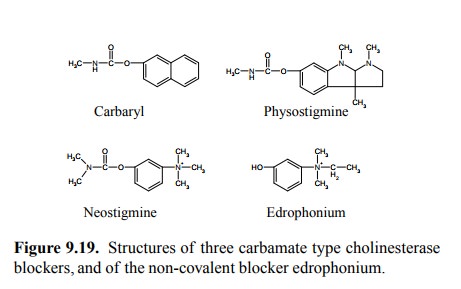 Cholinesterase inhibitors of both the carbamate and the organophosphate type are very important as insecticides. Such agents include parathion (which is first converted metabolically to paraoxon; Figure 9.17c), malathion, and carbaryl. Parathion is very poisonous for both insects and vertebrates (including homo sapiens), and therefore has largely been abandoned. Carbaryl binds more avidly to in-sect acetylcholinesterases and therefore has better selectiv-ity. Malathion achieves better selectivity by the inclusion of ester bonds within its peculiar (thiomalatediethyl ester) leaving group. Cleavage of those (by esterases other than cholinesterase) inactivates it and appears to proceed much more rapidly in mammals than in insects.

Organophosphates are active not only against acetyl-cholinesterase but also serine proteases – which is obvious-ly due to the shared catalytic mechanism. DFP is actually being used as a protease inhibitor in biotechnology. Anoth-er inhibitor that shares its mode of action but is less dan-gerous (because it is not volatile, and the enzyme adducts it forms are less stable) is PMSF (phenylmethylsulfone flu-oride). You may have encountered it in one or the other re-search lab; it is commonly added to crude cell extracts in order to minimize enzymatic breakdown of proteins during purification.