Cholinergic antagonists have a larger therapeutic role than agonists. Again, we can distinguish drugs that selectively affect nicotinic and muscarinic receptors.

Cholinergic antagonists have a larger therapeutic role than agonists. Again, we can distinguish drugs that selectively affect nicotinic and muscarinic receptors.

The classical muscarinic antagonists are atropine and the closely similar scopolamine. Atropine (Figure 9.12) will to some extent enter the brain and cause upheaval there as well – this is reflected in the German name of the plant contain-ing it (Tollkirsche = "crazy-cherry"). It is used for local ap-plication to the eye (widening the pupil, relaxing the ciliary muscle in diagnostic procedures), and during surgery to re-lax the airways and suppress salivation, both of which will help to avoid respiratory problems during narcosis. Iprat-ropium is used for oral and inhalation treatment to relax the airways in asthma, and occasionally to speed up a slow atri-oventricular node in the heart (cf. the preceding chapter). It is preferred over atropin in most applications because it does not quite as easily cross the blood brain barrier – by now, you should be able to tell why when looking at the structure. 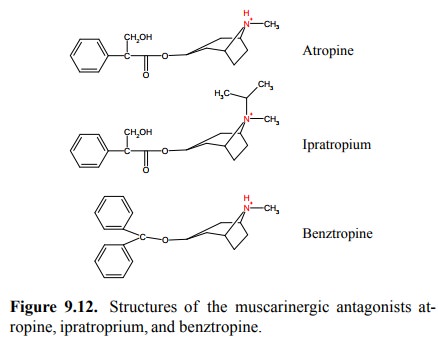 Benztropine is the most hydrophobic one of the three drugs in Figure 9.12 and accordingly distributes into the brain most easily. It is used as a component in the treatment of Parkinson's disease; anticholinergic drugs augment12 the action of dopaminergic drugs (such as L-DOPA) that re-main the mainstay of therapy in this disease.

Due to the molecular differences between NAR at the neu-romuscular junction and the autonomic ganglia, many nico-tinic antagonists are quite selective for one over the other. Antagonists that are specific for the ganglia – `ganglion blockers' – were among the first drugs to be used effec-tively for the treatment of hypertonia. However, they have now been nearly entirely abandoned, which is due to their rather numerous side effects which result from the block-ade of both the sympathetic and the parasympathetic sys-tems. We have seen the structures of hexamethonium and mecamylamine before in the chapter on pharmacokinetics – you will note the similarity between their pharmacokinet-ic characteristics and those described in this chapter for the other cholinergic agonists and antagonists. Another inter-esting structure is that of trimethaphan (Figure 9.13), which is still sometimes used in a condition called hypertensive crisis. In this molecule, the place of the quaternary amino group is taken by a sulfonium ion, which consists of a sulfur atom bound to three aliphatic substituents.

Nicotinergic antagonists with specificity for the neuromus-cular junction will cause paralysis. These agents are dis-cussed in the following section.

Muscle relaxants suppress muscle contraction in response to stimulation by the motoneurons. They may be either antagonists or agonists of nicotinic acetylcholine receptors. Muscle relaxants are routinely used in anesthesiology. To understand this application, consider that narcosis serves two distinct purposes:

2.  Suppression of muscle motility – after all, we don't want the patient to jump of the table and sleep walk around the operation theater.

For the first purpose, it is sufficient to abolish the activity of the higher centres in the brain, whereas the complete abol-ishment of reflex motility requires suppression of more or less the entire central nervous system. Although the latter can be achieved with narcotic gases (such as diethylether and its more modern congeners) alone, it requires higher dosages than are required for pain suppression only. The use of muscle relaxants makes it possible to reduce the amount of narcotic gases needed, and therefore to limit the associated risks and side effects.

The first muscle relaxant to be discovered and clinically used was d-tubocurarine (Figure 9.14a), which is found in curare, an arrow poison that was used by South American natives. Quite a bit of imagination is required to spot any structural resemblance to acetylcholine; d-tubocurarine is much larger and contains not one but two quaternary amines within a rather large, rigid ring structure. The re-semblance is more readily spotted with the more recent, synthetic compound pancuronium (Figure 9.14a). This molecule has two acetylcholine moieties, embedded in a larger structure that again looks rigid but otherwise does not have much similarity to d-tubocurarine. 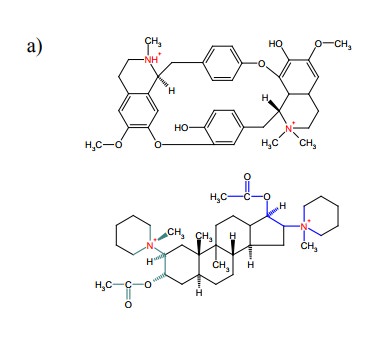 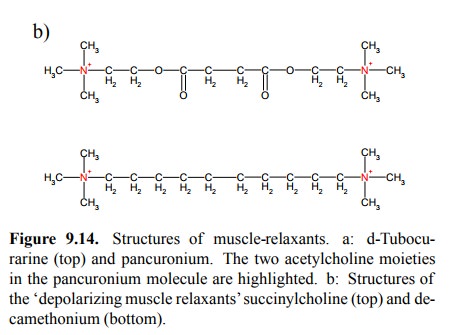 Both pancuronium and d-tubocurarine act by binding to the NAR in a way competitive with acetylcholine. In both cas-es, the presence of both positive charges is important for ac-tivity. Yet, it is questionable whether both cationic groups bind simultaneously to the two acetylcholine binding sites found (at the two α chains) of the NAR, since the distance between those should substantially exceed the one between the two charges in the antagonist molecules.

While both d-tubocurarine and pancuronium prevent open-ing of the NAR, another class of muscle relaxants effects neuromuscular blockade by triggering the opening of NAR and, accordingly, membrane depolarization. Thus, these drugs are not antagonists but agonists. In fact, this type of blockade – called `depolarizing block' – can be achieved with acetylcholine itself, if used at dosages exceeding those that occur physiologically13. The only agent in widespread use is succinyl-bis-choline (also called succinylcholine);

this is just two acetylcholine molecules joined end on (Fig-ure 9.14b). Another agonist is decamethonium, which is a longer analog of hexamethonium; however, the latter is an antagonist, not an agonist. One aspect of this blockade con-sists in the desensitization of the NAR – continuous pres-ence of acetylcholine or another agonist will lead to accu-mulation of the receptor in the inactivated state (cf. Figure 9.7, above). However, other mechanisms must be involved, too, which follows from the following observations:

1.  The membrane stays partially depolarized during the presence of the agonist. If all receptors were fixed in the inactivated state, the membrane should be completely repolarized.

2.  If muscle cells have been cut off from their neural in-put for a couple of weeks, they will express larger num-bers of NAR molecules, even outside those membrane regions that were previously in contact with the nerve cells. If acetylcholine or another depolarizing agent is applied to these cells, they will respond with maximum contraction, and no blockade will ensue. Thus, some regulatory mechanism that suppresses muscle contrac-tion upon sustained membrane depolarization in nor-mal cells seems to be lost concomitantly with the dener-vation.

Succinylcholine has a more sustained action at the motor endplate than acetylcholine has because it is insensitive to the acetylcholinesterase found in the synapse. There is, however, a second variety of cholinesterase that cir-culates in the blood plasma, also referred to as butyryl-cholinesterase14, which cleaves succinylcholine within minutes. This moderately rapid inactivation makes it pos-sible to control the degree of muscle relaxation by adjust-ing the infusion rate of the agent; after discontinuation, the remaining succinylcholine will be swiftly hydrolysed, and the block will subside. 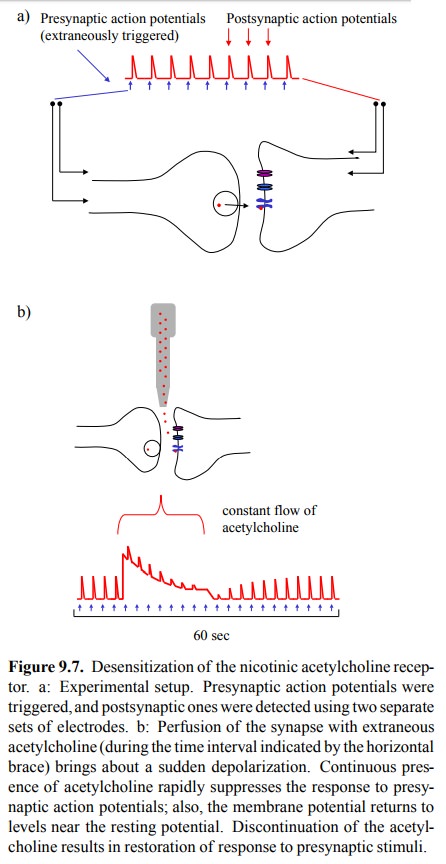