On the other hand, receptors may be promiscuous as well and couple to more than one G protein.

On the other hand, receptors may be promiscuous as well and couple to more than one G protein. Many receptors appear to be pre-associated with G proteins in the absence of agonists. The pre-bound G protein may in turn change the conformation of the entire receptor and thus modify its affinity for mediator and drug molecules. If there is more than one type of G protein to couple to a given receptor, this may result in several sub-populations of the receptor that may exhibit diverging affinities for different agonists. This behaviour is known as `agonist-specific coupling'.

An example of agonist-specific coupling is shown in Fig-ure 8.3. The receptor in question is the α1A-adrenergic re-ceptor. This receptor triggers at least two different intracel-lular signaling pathways: Arachidonic acid is released by phospholipase A2, and inositoltriphosphate (IP3) is released by phospholipase C. These two effects are mediated by two different G proteins that couple to the same receptor. If we compare the two parameters, the three compounds nore-pinephrine and meta- and para-octopamine yield substan-tially different potencies and efficacies. If we hadn't been told otherwise, we would interpret this observation as evi-dence of two different receptors. In a sense, of course, dif-ferent GPCR-G protein complexes are different receptors. 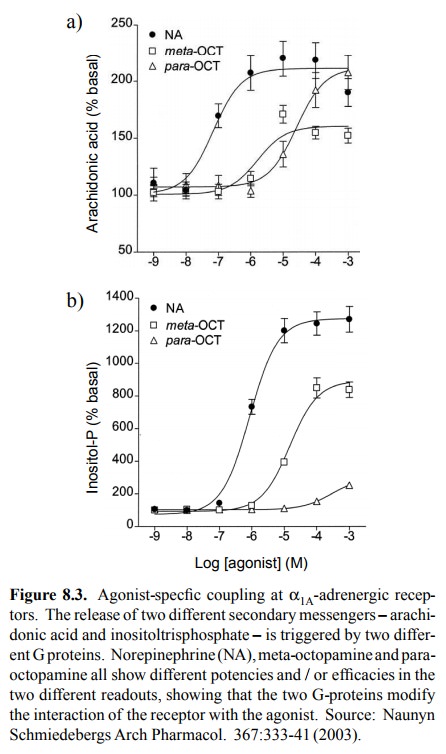