A more complex (and still somewhat contentious) mecha-nism of action is found with a group of drugs known as `in-direct sympathomimetics'.

A more complex (and still somewhat contentious) mecha-nism of action is found with a group of drugs known as `in-direct sympathomimetics'. Example structures are shown in Figure 10.15a. As you can see, all these structures lack the phenolic –OH groups present in epinephrine. This pre-vents their modification by catechol-O-methyltransferase and slows down their deamination by monoamine ox-idase. It also facilitates their crossing of the blood brain barrier, and it is mostly for their central effects – enhanced vigilance, elation, and suppression of appetite, result-ing in weight loss – that these drugs have been used and abused. Amphetamine and methamphetamine preferen tially act on catecholaminergic synapses, in particular on those containing norepinephrine. In contrast, the substance 3,4-methylenedioxyamphetamine (a.k.a. `ecstasy'; Figure 10.15b) has a stronger effect on serotoninergic synapses. It is likewise popular as a drug of abuse. 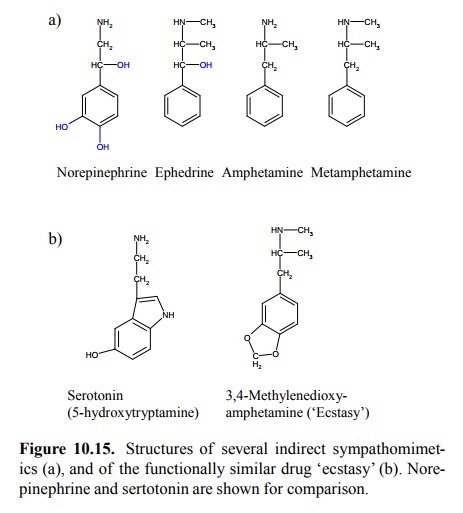 Amphetamine acts on both transmitter transporters – the plasmalemmal one, which is the site of action of cocaine, and the vesicular transporter, which is targeted by reserpine. It is imported into the cell by the plasmalemmal transporter. This will result in inhibited reuptake of the physiological transmitter, not so much apparently by direct competition (as is the case with cocaine) but by subsequent endocytosis of the receptor. This is clearly shown in Figure 10.16. In the experiment shown, the dopamine reuptake transporter was recombinantly expressed in cultured cells and visu-alized by immunofluorescence 9. Initially, the fluorescence is confined to the surface of the cells expressing the trans-porter10 (Figure 10.16b, left panel). After exposure of the cells to amphetamine, the stain gradually disappears from the surface and is translocated into the cell interior, indi-cating endocytosis of the transporter11. Simultaneously, the transport capacity for dopamine drops by some 80-90%, as measured by the current across the cell membrane induced by dopamine (Figure 10.16a). The transport can be meaplasm (cf. Figure 10.11a; note that dopamine itself carries sured as a current, since for each molecule of dopamine taken up there is a net transfer of 2 cations into the cytoa positive charge, too). There is not much known about how amphetamine import triggers transporter endocytosis. 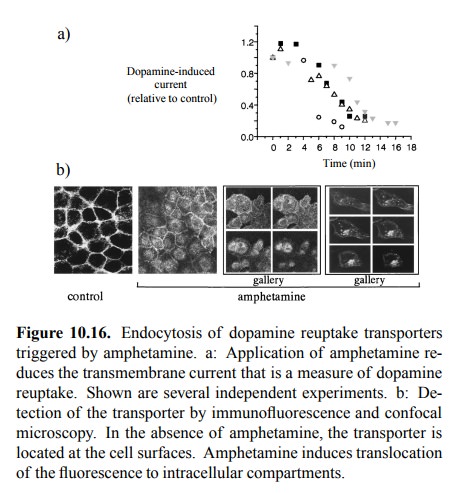 In addition to interfering with the reuptake of cate-cholamine transmitters, amphetamine will also release transmitter that is stored inside vesicles. This is different from reserpine, which only prevents uptake of more trans-mitter molecules into the vesicles but does not cause release of those already inside. The release itself can be demon-strated quite clearly with transmitter vesicles isolated form nerve tissue (Figure 10.17a); its mechanism, however, is still contentious. From several reports in the literature, I have distilled the model12 depicted in Figure 10.17b.

As with the plasmalemmal transporter, the ionized form of the transmitter is the one that is the substrate for active transport into the vesicle. We saw above that this transport is powered by antiport of protons from the vesicle into the cytosol. For the hypothetical mechanism of transmitter depletion to work, it is important that there be more than one proton released from the vesicle in exchange for ev-ery catecholamine molecule imported (i.e., n > 1 in Fig-ure 10.17b).

The high proton concentration in the vesicle serves yet another purpose, which consists in trapping the cate-cholamine in its protonated form inside the vesicle (and thereby preventing it from slipping back across the mem-brane by non-ionic diffusion). Amphetamine would de-rail this mechanism by again functioning as a substrate for transport. This would lead to depletion of the protons from the vesicle interior. Both amphetamine and the transmitter itself would thus be present to an increased extent in their non-protonated forms and thus would leak out of the vesi-cle by non-ionic diffusion. Amphetamine, in particular, being less polar, would efficiently escape from the vesicle and thus by futile cycling between cytosol and vesicle ex-haust the capacities of the proton pump and, possibly, the transporter.