The nicotinic acetylcholine receptor is found in the motor endplate of the skeletal muscle, and in both the sympathetic and the parasympathetic ganglia of the periph-eral autonomic system.

1.  Receptor type and subtype specificity of agonists or antagonists, and

2.  Exclusion by the blood brain barrier of drugs intended for peripheral action.

One particular feature of cholinergic synapses is the mode of transmitter inactivation. While with most transmit-ters this is accomplished by presynaptic transmitter re-uptake, acetylcholine is cleaved extracellularly by acetyl-cholinesterase. This enzyme is located on the postsynaptic membrane, right next to the receptors (Figure 9.1). Its ac-tivity is very high, so that the rate-limiting event in acetyl-choline inactivation is not cleavage but dissociation from the receptor. Besides the direct receptor agonists and an-tagonists, blockers of cholinesterase (also referred to as `in-direct agonists') are an additional class of drugs that will modulate the effectiveness of transmission in cholinergic synapses. 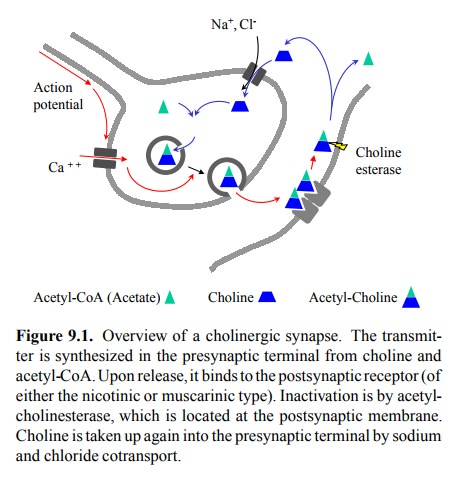