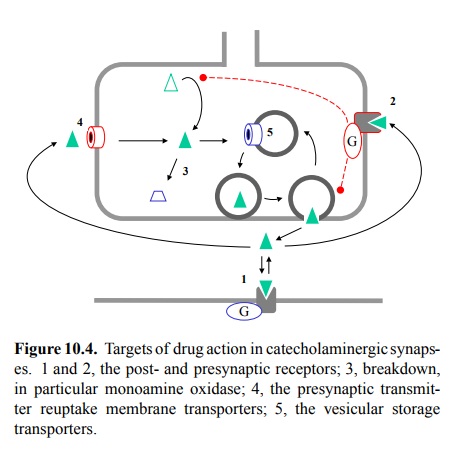 In an catecholaminergic synapse, we find several sites that can be targets of drug action (Figure 10.4):

In an catecholaminergic synapse, we find several sites that can be targets of drug action (Figure 10.4):

1.  The most straightforward one is, of course, the postsy-naptic receptor, to which both agonists and antagonists will bind. As we have seen before, these receptors oc-cur in various types and subtypes. With the three physiological catecholamines, there is a fairly clear distinc-tion between the α- and β-receptors on one hand, which respond to epinephrine and norepinephrine but not dopamine, and the dopaminergic receptors. The major functional difference between epinephrine and nore-pinephrine consists in their activity on the β2 receptor subtype, which is very sensitive to the former but not the latter. Synthetic agonists and antagonists (which may or may not closely resemble the natural catecholamines in structure) often have superior type and subtype selectiv-ity, which is both theoretically interesting and useful in therapeutic applications.

Both α2 and D2 receptors also occur postsynaptically, so their function is not limited to presynaptic inhibition1.

3.  The degradative pathway. Inhibitors of MAO were among the first drugs used in both anti-hypertensive and psychiatric therapy. Though effective, they are not used very much today, for reasons that will become apparent below. Inhibitors of COMT are used in combination with L-DOPA in the therapy of Parkinson's disease (see below).

4.  The reuptake membrane transporter in the cytoplas-mic membrane. The transporters found in serotonin-ergic, dopaminergic and noradrenergic synapses are highly homologous to one another, and they are some-what promiscuous with respect to their substrates (e.g., the norepinephrine transporter will transport dopamine with appreciable speed, and vice versa). This also applies to several inhibitors of reuptake, e.g. co-caine, which inhibits the reuptake of dopamine, nore-pinephrine, and serotonin (see below). To a lesser de-gree, the homology also applies to the reuptake trans-porters for glutamate, GABA and glycine, which sug-gests the possibility of even wider-ranging drug effects.

5.  The vesicular transmitter transporter. This transporter is structurally and functionally different from the trans-porter in the cytoplasmic membrane and accordingly affected by different drugs and mechanisms of drug action. 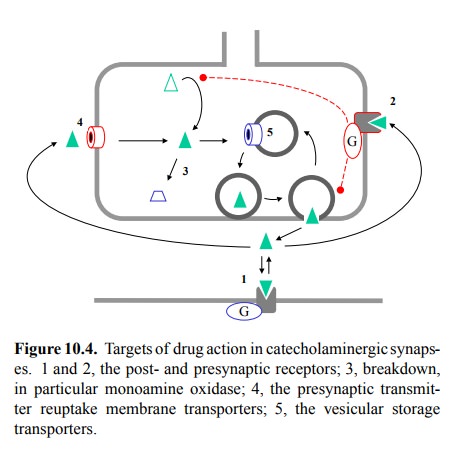