Biosynthesis and degradation of catecholamines

The catecholamines - dopamine, norepinephrine, and epinephrine are successively derived from tyrosine. Syn-thesis occurs in the nerve terminals and in the adrenal gland.

Biosynthesis and degradation of catecholamines

The catecholamines - dopamine, norepinephrine, and epinephrine are successively derived from tyrosine. Syn-thesis occurs in the nerve terminals and in the adrenal gland. Tyrosine hydroxylase catalyzes the first step (Figure 10.2a) and is the major site of regulation (inhibition by dopamine and noradrenaline, activation by cAMP). This step gives rise to 3,4-dihydroxyphenylalanine (L-DOPA), which in turn is a substrate for L-aromatic acid decarboxylase. Decarboxylation yields the first mediator, dopamine. The sub-strate specificity of the decarboxylase is rather low, and it thus will also accept 5-hydroxytryptophan (the precursor of serotonin, Figure 10.2a) and a variety of synthetic analogs, as we shall see later. Further hydroxylation of dopamine leads to norepinephrine, and methylation to epinephrine.

The biosynthesis of serotonin is similar to that of dopamine and also involves enzymatic hydroxylation and subsequent decarboxylation (Figure 10.2b). 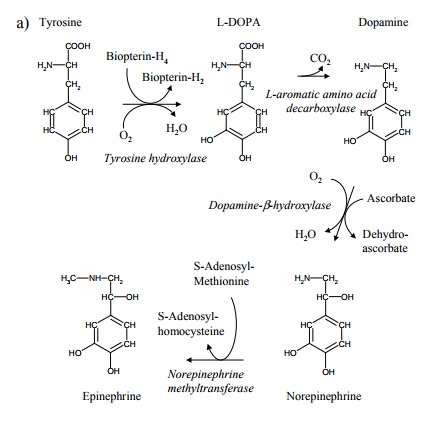 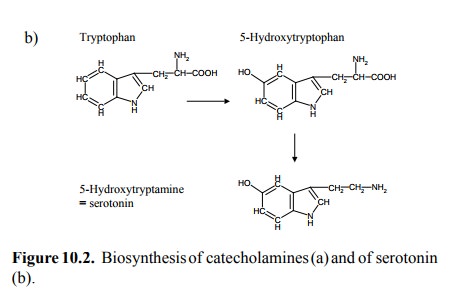 Catecholamines and serotonin also share the major mode of degradation. Both are substrates for monoamine oxidase (MAO), although one subtype of this enzyme (MAO A) has a preference for catecholamines, whereas the other (MAO  B) acts more efficiently on serotonin. MAO is found both within the synaptic terminals, where it degrades any excess transmitter, and in the liver, where it scavenges circulating catecholamines. 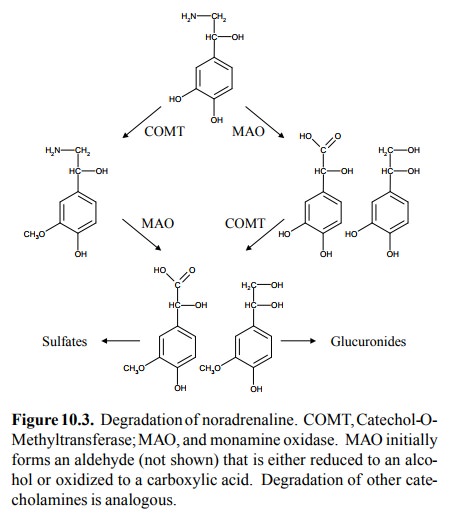 A second enzyme, catechol-O-methyltransferase (COMT), inactivates catecholamines by attaching a methyl group to the 3-OH group of the catechol moiety (Figure 10.3). This is illustrated here only for norepinephrine but hap-pens in just the same way for the other catecholamines as well. Since both MAO and COMT have fairly loose sub-strate specificities, they can operate on each other's prod-ucts and hence in either sequence. Before elimination, the MAO/COMT-generated products may or may not be fur-ther conjugated by sulfation or glucuronidation, by the same enzymes that also conjugate drug molecules.