The first adrenergic receptor types to be distinguished from each other were the adrenergic α- and β-receptors.

The first adrenergic receptor types to be distinguished from each other were the adrenergic α- and β-receptors. Initially based on the different cardiovascular effects of epinephrine and norepinephrine, this distinction was borne out more clearly with the synthetic β-selective agent isoproterenol. Furthermore, subtypes of both α- and β-receptors can be distinguished by selective agonists (Figure 10.5). 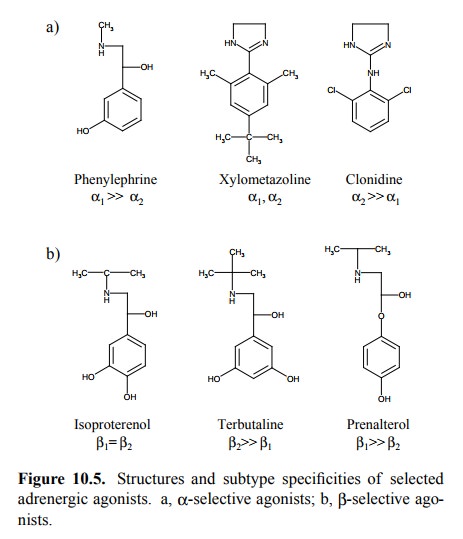 The different cardiovascular effects of α- and β-receptors are illustrated in the experiment in Figure 10.6. Phenyle-phrine, an α-selective agent, causes vasoconstriction and accordingly a rise in blood pressure. The heart has few α-receptors, so phenylephrine does not accelerate the heart rate. Rather, the heart rate drops a little, due to an auto-nomic physiological reflex triggered by the increased blood pressure2. Conversely, the β-selective agonist isoproterenol speeds up the heart rate quite significantly, yet neverthe-less causes the blood pressure to drop, which is due to va-sodilatation. The initial brief spike of the blood pressure is probably caused by delayed distribution of the drug into the skeletal muscle, where most of the vascular β2-receptors are located. Vasodilatation will therefore lag behind the stimulatory effect on the heart, since the heart is perfused much more strongly than the skeletal muscle, especially at rest. Epinephrine, which stimulates both α- and β-recep-tors, shows an intermediate response. 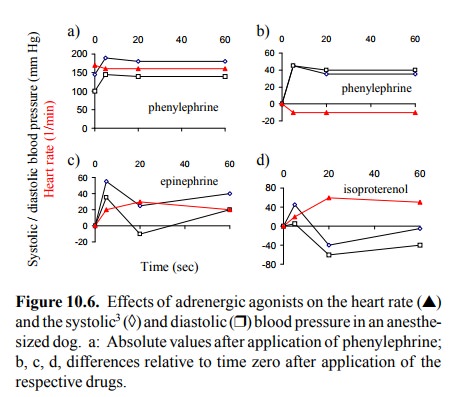 The vasopressor response seen with phenylephrine is par-ticularly strong because it is an α1-selective agonist. α2-Ag-onists actually lower the blood pressure, which is in ac-cord with the role of the α2-receptors in presynaptic inhi-bition. This inhibition is shown in Figure 10.7a: The re lease of radioactively labeled norepinephrine from the nerve terminals is reduced by about 80% with an α2 agonist (UK 14,304). In the presence of α-receptor blockers (rau-wolscine or phentolamine), we see a right shift of the dose response curve, which confirms the receptor-specific mode of action of this effect.

Further confirmation of the role of the α2-receptor comes from gene knockout experiments (Figure 10.7b). There are actually three discernible subtypes (or subsubtypes – have as many subs as you please) of the α2 receptor, named A/D, B and C, with distinct genes on different chromosomes. In the particular cell type used in the experiment shown, the A/D subtype was evidently responsible for most of the inhibition of transmitter release. 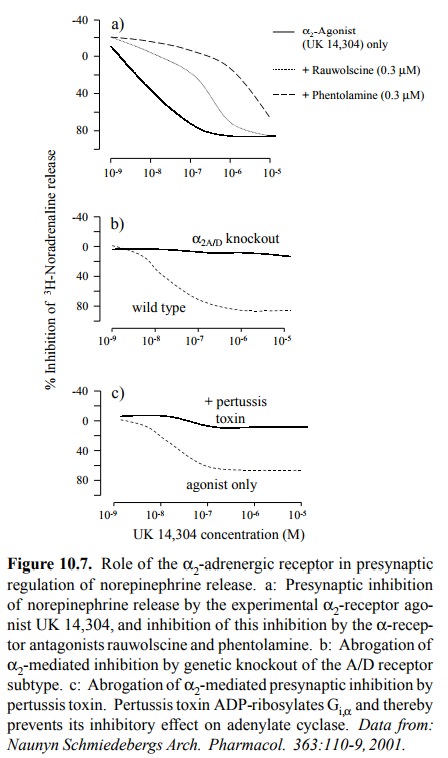 While this inhibition is very nice and unequivocal, the in-tracellular events that occur subsequent to α2 receptor stim-ulation are less clearly defined. The experiment depicted in Figure 10.7c suggests that indeed, as stated earlier, the α2-receptor acts by lowering cAMP. Pertussis toxin– the major toxin secreted by the bacterium Bordetella pertussis, the causative agent of whooping cough – is able to cross the cell membrane and then covalently modify4 the α-subunit ot the Gi protein that normally inhibits adenylate cyclase when activated by the α2 receptor.

Although pertussis toxin is a popular tool in signal transduc-tion research, it acts on several G proteins other than Gi as well, so that the implication of cAMP by toxin inhibition is not cogent. In fact, experimental evidence is also available that throws the role of cAMP in α2-mediated effects into question. You will recall that the release of insulin from pancreatic islet cells is closely similar to neurotransmitter exocytosis. It is stimulated by glucose and further ampli-fied by cAMP. The effect of cAMP can be studied using the cell-permeant synthetic analog dibutyryl-cAMP (Figure 10.8a). Intracellularly, the butyryl and acetyl groups of this `pro-drug' will get cleaved off to release cAMP itself, and in Figure 10.8b you can see that the cAMP released indeed increases insulin secretion. However, at sufficiently high concentrations, clonidine suppresses the increased insulin release caused by cAMP (Figure 10.8c). This suggests that the effect of the α2-receptor stimulation must be located somewhere downstream of adenylate cyclase and cAMP. α2-Receptor stimulation has measurable effects on Ca++ and K+ channels, which are involved in insulin secretion. 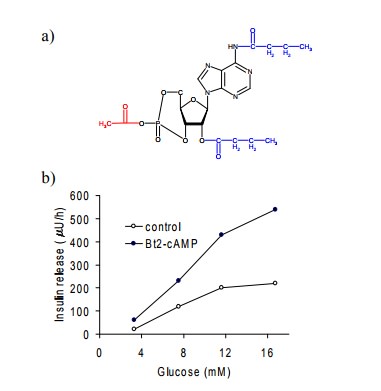 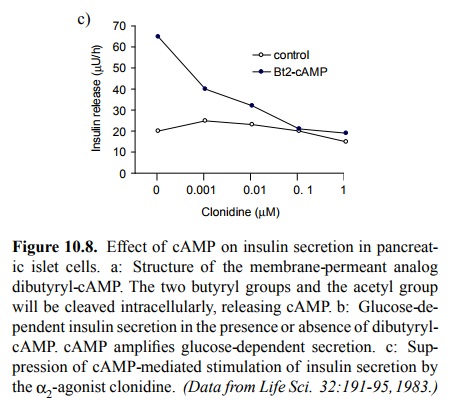 How these effects relate to cAMP or to the βγ-subunits of Gi is not known with certainty.

Figure 10.9 illustrates the blood-pressure lowering effect of clonidine. As with isoproterenol (cf. Figure 10.6), the ear-ly effects go into the opposite direction, but here this phase lasts minutes rather than seconds, which probably reflects the need of the drug to cross the blood brain barrier to elicit the drop in blood pressure. In this case, we see a very strong reflectory increase of the heart rate that finally negates the drop in blood pressure. This type of counter-regulation is very common. Effective treatment of hypertension there-fore frequently requires the combined use of several drugs with complementary modes of action. For example, the re-flectory increase in heart rate could effectively by coun-tered by the simultaneous application of β-receptor antago-nists. 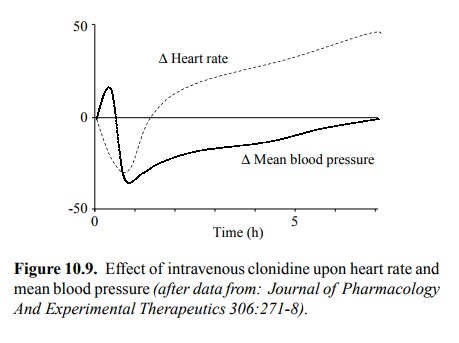 β1-selective agonists such as prenalterol (Figure 10.5) or dobutamine are used to stimulate heart contractility and heart rate in patients that exhibit too low blood pressure. β2-Selective agents such as terbutaline find application for relaxation and dilatation of the bronchi in the treat-ment of asthma or chronic obstructive lung disease, and in the suppression of premature labour. The mechanism of β-receptor-induced relaxation of smooth muscle – cAMP-mediated phosphorylation and inhibition of myosin light chain kinase – has been described before.

Like agonists, adrenergic receptor antagonists come in var-ious degrees of type and subtype selectivity. Among the α-receptor antagonists, phentolamine and tolazoline (Fig-ure 10.10) act on both α1- and α2-receptors. α2-Selective antagonists do exist (e.g. yohimbine) but don't have ma-jor therapeutical applications. Considering the physiolog-ical role of α2 receptors, it is clear that α1-selective antag-onists such as prazosine are preferable for use in the thera-py of hypertension. In addition to reversible blockers, irre-versible (covalent) blockers are available for particular sit-uations such as adrenaline-producing tumours (cf. the dis-cussion of phenoxybenzamine in the chapter on pharmaco-dynamics). 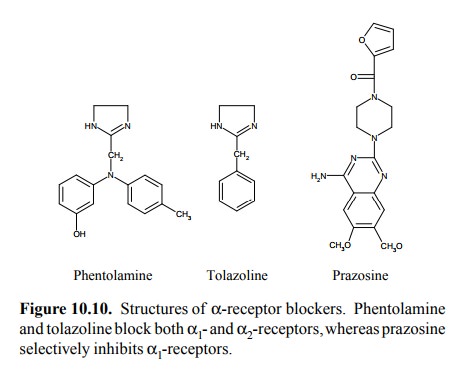 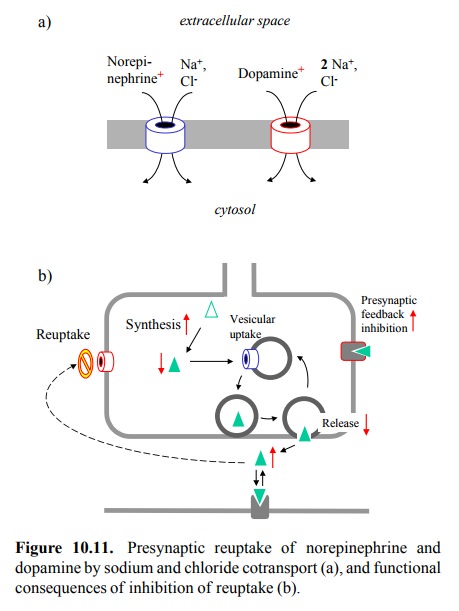 The practically most important class of drugs directly act-ing on any adrenergic receptor are the β-blockers (Figure 10.12). They are mainly used to reduce the workload on a heart subject to impaired perfusion due to atherosclerotic blood vessel obliteration. The most severe consequence of this impaired perfusion is myocardial infarction, which consists in the irreversible damage to the regions of heart muscle tissue downstream of an obliterated artery. Patients experiencing the first such event are at considerable con-tinuous risk of repeated attacks. Accordingly, the number of survivors in this group of patients decreases substantial-ly with time. β-Blockers are among the very few agents that afford them a substantial and indubitable benefit, in terms of life expectancy. While in Figure 10.12b atenolol appears somewhat superior to propanolol, the effect of an-other β2-selective blocker (metoprolol) was virtually indis-tinguishable from that of propranolol (not shown). There is thus far no conclusive evidence that β2-selective antagonists really are more effective than those that are not subtype-specific. 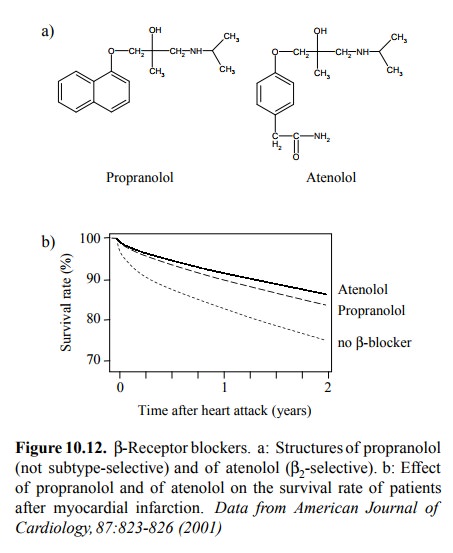