Molecular formula of a compound is the simplest, least informative representation, showing the ratio of atoms present.

Molecular formula of a compound is the simplest, least informative representation, showing the ratio of atoms present. The structure of an organic compound can be represented using any one of the below mentioned methods.

This structural formula can be further abbreviated by omitting some or all of the dashes representing covalent bonds and by indicating the number of identical groups attached to an atom by a subscript. The resulting expression of the compound is called a condensed structural formula.

For further simplification, organic chemists use another way of representing the structures in which only lines are used. In this type of representation of organic compounds, carbon and hydrogen atoms are not shown and the lines representing carbon-carbon bonds are shown in a zigzag fashion. The only atoms specifically written are oxygen, chlorine, nitrogen etc. These representations can be easily understood by the following illustration. 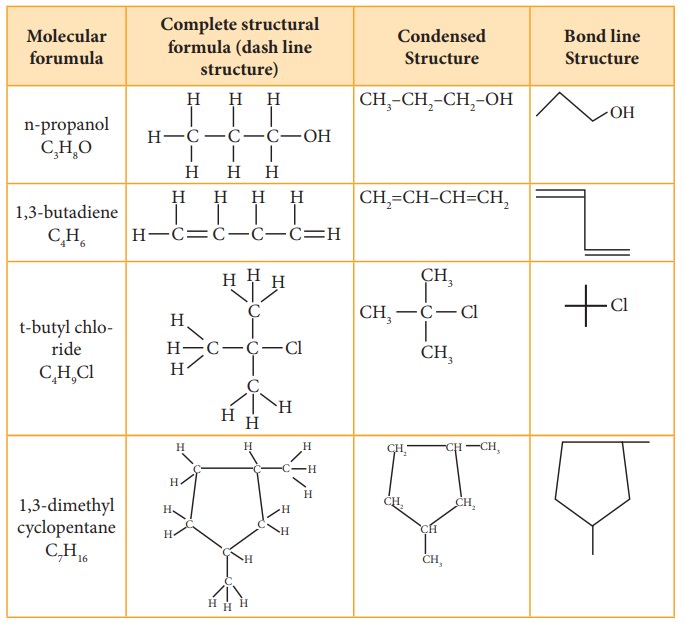 Molecular models are physical devices that are used for a better visualisation and perception of three dimensional shapes of organic molecules. These are made of wood, plastic or metal and are commercially available. (i) Frame work model (ii) Ball and stick model & (iii) space filling model. In the frame work model only the bonds connecting the atoms themselves are shown. This model emphasizes the pattern of bonds of a molecule while ignoring the size of the atom. In the ball and stick model, both the atoms and the bonds are shown. Ball represent atoms and the stick a bond. Compounds containing C=C can be best represented by using springs in place of sticks and this model is termed as ball and spring model. The space filling model emphasizes the relative size of each atom based on its vander-waals radius.

The simplest convention is solid and dashed wedge formula in which 3-D image of a molecule can be perceived from two dimensional picture. In this representation a tetrahedral molecule with four atoms or group a,b,c and d bonded to it can be represented by a wedge formula as follows. A solid wedge (

) (or a dashed line) is used to depict the bond below the plane. The bonds lying in the plane of the paper are shown by normal lines. 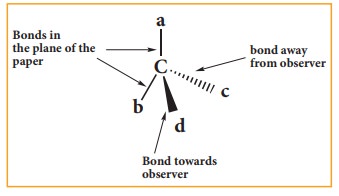 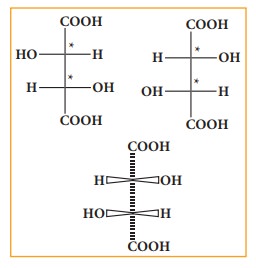 Here the bond between two carbon atoms is drawn diagonally and slightly elongated. The lower left hand carbon is considered lying towards the front and the upper right hand carbon towards the back. The Fischer projection inadequately portrays the spatial relationship between ligands attached to adjacent atoms. The sawhorse projection attempts to clarify the relative location of the groups. 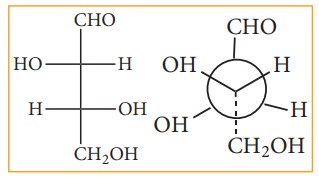