The most valuable method for the separation and purification of small quantity of mixtures.

The most valuable method for the separation and purification of small quantity of mixtures. As name implies chroma-colour and graphed writing it was first applied to separation of different colored constituents of chlorophyll in 1906 by M.S Tswett, a Russian botanist. He achieved it by passing a petroleum ether solution of chlorophyll present in leaves through a column of CaCO3 firmly packed into a narrow glass tube. Different components of the pigments got separated into land or zones of different colors and now this technique is equally well applied to separation of colorless substances.

The principle involved is different compounds are adsorbed on an adsorbent to different degree. Silica gel and alumina are the commonly used adsorbent. The components of the mixture move by varying distances over the stationary phase. Column chromatography and thin layer chromatography are the techniques based on the principle of differential adsorption.

This is the simplest chromatographic method carried out in long glass column having a stop cock near the lower end. This method involves separation of a mixture over a column of adsorbent (Stationery phase) packed in a column. In the column a plug of cotton or glass wool is placed at the lower end of the column to support the adsorbent powder. The tube is uniformLy packed with suitable absorbent constitute the stationary phase. (Activated aluminum oxides (alumina), Magnesium oxide, starch are also used as absorbents). 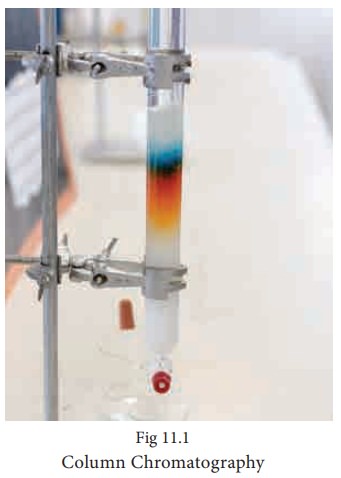 The mixture to be separated is placed on the top of the adsorbent column. Eluent which is a liquid or a mixture of liquids is allowed to flow down the column slowly. Different components depending upon the degree to which the components are adsorbed and complete separation takes place. The most readily adsorbed substances are retained near the top and others come down to various distances in the column.

This method is an another type of adsorption chromatography with this method it is possible to separate even minute quantities of mixtures. A sheet of a glass is coated with a thin layer of adsorbent (cellulose, silica gel or alumina). This sheet of glass is called chromoplate or thin layer chromatography plate. After drying the plate, a drop of the mixture is placed just above one edge and the plate is then placed in a closed jar containing eluent (solvent). The eluent is drawn up the adsorbent layer by capillary action. The components of the mixture move up along with the eluent to different distances depending upon their degree of adsorption of each component of the mixture. It is expressed in terms of its retention factor (ie) Rf value

The spots of colored compounds are visible on TLC plate due to their original color. The colorless compounds are viewed under uv light or in another method using iodine crystals or by using appropriate reagent.

Paper chro-matography (PC) is an example of parti-tion chromatography. The same procedure is followed as in thin layer chromatog-raphy except that a strip of paper acts as an adsorbent. This method involves con-tinues differential portioning of compo-nents of a mixture between stationary and mobile phase. In paper chromatography, a special quality paper known as chroma-tography paper is used. This paper act as a stationary phase.

A strip of chromatographic paper spotted at the base with the solution of the mixture is suspended in a suitable solvent which act as the mobile phase. The solvent rises up and flows over the spot. The paper selectively retains different components according to their different partition in the two phases where a chromatogram is developed. The spots of the separated colored compounds are visible at different heights from the position of initial spots on the chromatogram. The spots of the separated colorless compounds may be observed either under ultraviolent light or by the use of an appropriate spray reagent.