Sodium nitroprusside is a powerful parenterally administered vasodilator that is used in treating hypertensive emergencies as well as severe heart failure.

Sodium nitroprusside is a powerful parenterally administered vasodilator that is used in treating hypertensive emergencies as well as severe heart failure. Nitroprusside dilates both arterial and venous vessels, resulting in reduced peripheral vascular resistance and venous return. The action occurs as a result of activation of guanylyl cyclase, either via release of nitric oxide or by direct stimulation of the enzyme. The result is increased intracellular cGMP, which relaxes vascular smooth muscle (Figure 12–2).In the absence of heart failure, blood pressure decreases, owing to decreased vascular resistance, whereas cardiac output does not change or decreases slightly. In patients with heart failure and low cardiac output, output often increases owing to afterload reduction. 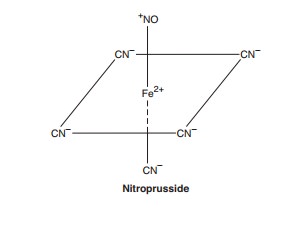 Nitroprusside is a complex of iron, cyanide groups, and a nitroso moiety. It is rapidly metabolized by uptake into red blood cells with liberation of cyanide. Cyanide in turn is metabolized by the mitochondrial enzyme rhodanase, in the presence of a sulfur donor, to the less toxic thiocyanate. Thiocyanate is distributed in extracellular fluid and slowly eliminated by the kidney.

Nitroprusside rapidly lowers blood pressure, and its effects disappear within 1–10 minutes after discontinuation. The drug is given by intravenous infusion. Sodium nitroprusside in aque-ous solution is sensitive to light and must therefore be made up fresh before each administration and covered with opaque foil. Infusion solutions should be changed after several hours. Dosage typically begins at 0.5 mcg/kg/min and may be increased up to 10 mcg/kg/min as necessary to control blood pressure. Higher rates of infusion, if continued for more than an hour, may result in toxicity. Because of its efficacy and rapid onset of effect, nitroprusside should be administered by infu-sion pump and arterial blood pressure continuously monitored via intra-arterial recording.

Other than excessive blood pressure lowering, the most serious toxicity is related to accumulation of cyanide; metabolic acidosis, arrhythmias, excessive hypotension, and death have resulted. In a few cases, toxicity after relatively low doses of nitroprusside suggested a defect in cyanide metabolism. Administration of sodium thiosul-fate as a sulfur donor facilitates metabolism of cyanide. Hydroxocobalamin combines with cyanide to form the nontoxic cyanocobalamin. Both have been advocated for prophylaxis or treatment of cyanide poisoning during nitroprusside infusion. Thiocyanate may accumulate over the course of prolonged admin-istration, usually several days or more, particularly in patients with renal insufficiency who do not excrete thiocyanate at a normal rate. Thiocyanate toxicity is manifested as weakness, disorienta-tion, psychosis, muscle spasms, and convulsions, and the diagnosis is confirmed by finding serum concentrations greater than 10 mg/dL. Rarely, delayed hypothyroidism occurs, owing to thiocyanate inhi-bition of iodide uptake by the thyroid. Methemoglobinemia dur-ing infusion of nitroprusside has also been reported.