In many patients, hypertension is initiated and sustained at least in part by sympathetic neural activation.

In many patients, hypertension is initiated and sustained at least in part by sympathetic neural activation. In patients with moderate to severe hypertension, most effective drug regimens include an agent that inhibits function of the sympathetic nervous system. Drugs in this group are classified according to the site at which they impair the sympathetic reflex arc (Figure 11–2). This neuro-anatomic classification explains prominent differences in cardiovas-cular effects of drugs and allows the clinician to predict interactions of these drugs with one another and with other drugs.The subclasses of sympathoplegic drugs exhibit different pat-terns of potential toxicity. Drugs that lower blood pressure by actions on the central nervous system tend to cause sedation and mental depression and may produce disturbances of sleep, includ-ing nightmares. Drugs that act by inhibiting transmission throughautonomic ganglia (ganglion blockers) produce toxicity from inhibition of parasympathetic regulation, in addition to profound sympathetic blockade and are no longer used. Drugs that act chiefly by reducing release of norepinephrine from sympathetic nerve endings cause effects that are similar to those of surgical sympathectomy, including inhibition of ejaculation, and hypoten-sion that is increased by upright posture and after exercise. Drugs that block postsynaptic adrenoceptors produce a more selective spectrum of effects depending on the class of receptor to which they bind. Although not discussed, it should be noted that renal sympathetic denervation is effective in lowering blood pressure in patients with hypertension resistant to antihyper-tensive drugs. 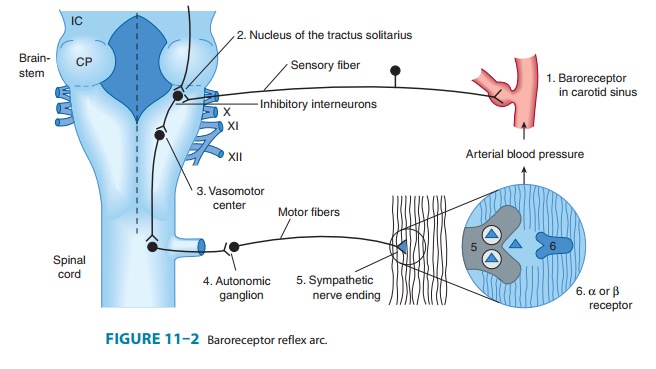 Finally, one should note that all of the agents that lower blood pressure by altering sympathetic function can elicit compensatory effects through mechanisms that are not dependent on adrenergic nerves. Thus, the antihypertensive effect of any of these agents used alone may be limited by retention of sodium by the kidney and expansion of blood volume. For this reason, sympathoplegic antihypertensive drugs are most effective when used concomi-tantly with a diuretic