Captopril and other drugs in this class inhibit the convertingenzyme peptidyl dipeptidase that hydrolyzes angiotensin I to angiotensin II and (under the name plasma kininase) inactivatesbradykinin, a potent vasodilator, which works at least in part by stimulating release of nitric oxide and prostacyclin.

Captopril and other drugs in this class inhibit the convertingenzyme peptidyl dipeptidase that hydrolyzes angiotensin I to angiotensin II and (under the name plasma kininase) inactivatesbradykinin, a potent vasodilator, which works at least in part by stimulating release of nitric oxide and prostacyclin. The hypoten-sive activity of captopril results both from an inhibitory action on the renin-angiotensin system and a stimulating action on the kallikrein-kinin system (Figure 11–5). The latter mechanism has been demonstrated by showing that a bradykinin receptor antag-onist, icatibant , blunts the blood pressure-lowering effect of captopril. 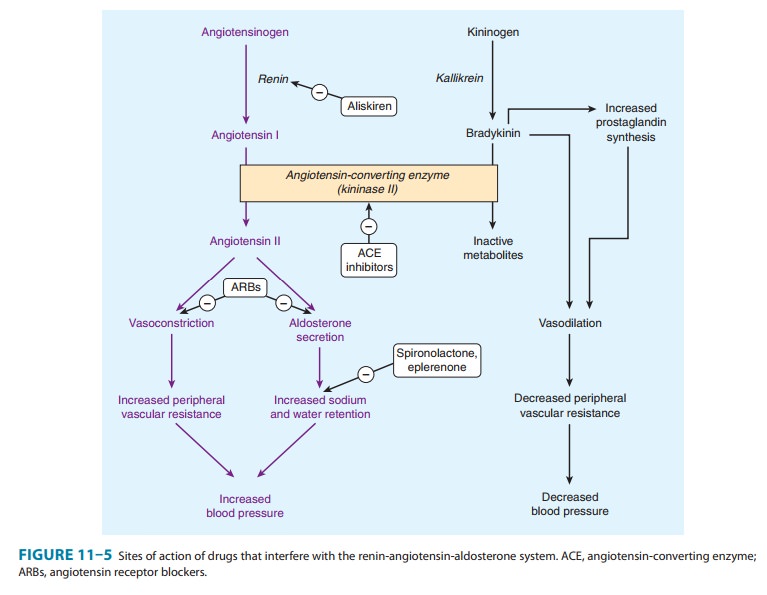 Enalapril is an oral prodrug that is converted by hydrolysis toa converting enzyme inhibitor, enalaprilat, with effects similar to those of captopril. Enalaprilat itself is available only for intrave-nous use, primarily for hypertensive emergencies. Lisinopril is a lysine derivative of enalaprilat. Benazepril, fosinopril, moexipril,perindopril, quinapril, ramipril, and trandolapril are otherlong-acting members of the class. All are prodrugs, like enalapril, and are converted to the active agents by hydrolysis, primarily in the liver.

Angiotensin II inhibitors lower blood pressure principally by decreasing peripheral vascular resistance. Cardiac output and heart rate are not significantly changed. Unlike direct vasodilators, these agents do not result in reflex sympathetic activation and can be used safely in persons with ischemic heart disease. The absence of reflex tachycardia may be due to downward resetting of the baroreceptors or to enhanced parasympathetic activity.

ACE inhibitors have a particularly useful role in treating patients with chronic kidney disease because they diminish pro-teinuria and stabilize renal function (even in the absence of lower-ing of blood pressure). This effect is particularly valuable in diabetes, and these drugs are now recommended in diabetes even in the absence of hypertension. These benefits probably result from improved intrarenal hemodynamics, with decreased glom-erular efferent arteriolar resistance and a resulting reduction of intraglomerular capillary pressure. ACE inhibitors have also proved to be extremely useful in the treatment of heart failure, and after myocardial infarction, and there is recent evidence that ACE inhibitors reduce the incidence of diabetes in patients with high cardiovascular risk .

Captopril’s pharmacokinetic parameters and dosing recommenda-tions are set forth in Table 11–2. Peak concentrations of enalapri-lat, the active metabolite of enalapril, occur 3–4 hours after dosing with enalapril. The half-life of enalaprilat is about 11 hours. Typical doses of enalapril are 10–20 mg once or twice daily. Lisinopril has a half-life of 12 hours. Doses of 10–80 mg once daily are effective in most patients. All of the ACE inhibitors except fosinopril and moexipril are eliminated primarily by the kidneys; doses of these drugs should be reduced in patients with renal insufficiency.

Severe hypotension can occur after initial doses of any ACE inhibitor in patients who are hypovolemic as a result of diuretics, salt restriction, or gastrointestinal fluid loss. Other adverse effects common to all ACE inhibitors include acute renal failure (particularly in patients with bilateral renal artery stenosis or stenosis of the renal artery of a solitary kidney), hyperkalemia, dry cough sometimes accompanied by wheezing, and angio-edema. Hyperkalemia is more likely to occur in patients with renal insufficiency or diabetes. Bradykinin and substance P seem to be responsible for the cough and angioedema seen with ACE inhibition.

ACE inhibitors are contraindicated during the second and third trimesters of pregnancy because of the risk of fetal hypoten-sion, anuria, and renal failure, sometimes associated with fetal malformations or death. Recent evidence also implicates first-trimester exposure to ACE inhibitors in increased teratogenic risk. Captopril, particularly when given in high doses to patients with renal insufficiency, may cause neutropenia or proteinuria. Minor toxic effects seen more typically include altered sense of taste, allergic skin rashes, and drug fever, which may occur in up to 10% of patients.Important drug interactions include those with potassium supplements or potassium-sparing diuretics, which can result in hyperkalemia. Nonsteroidal anti-inflammatory drugs may impair the hypotensive effects of ACE inhibitors by blocking bradykinin-mediated vasodilation, which is at least in part, prostaglandin mediated.