Methyldopa was widely used in the past but is now used primarily for hypertension during pregnancy.

Methyldopa was widely used in the past but is now used primarily for hypertension during pregnancy. It lowers blood pressure chiefly by reducing peripheral vascular resistance, with a variable reduction in heart rate and cardiac output.Most cardiovascular reflexes remain intact after administration of methyldopa, and blood pressure reduction is not markedly dependent on posture. Postural (orthostatic) hypotension some-times occurs, particularly in volume-depleted patients. One potential advantage of methyldopa is that it causes reduction in renal vascular resistance. 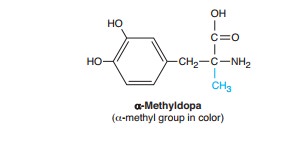 Pharmacokinetic characteristics of methyldopa are listed in Table 11–2. Methyldopa enters the brain via an aromatic amino acid transporter. The usual oral dose of methyldopa produces its maximal antihypertensive effect in 4–6 hours, and the effect can persist for up to 24 hours. Because the effect depends on accumu-lation and storage of a metabolite (α-methylnorepinephrine) in the vesicles of nerve endings, the action persists after the parent drug has disappeared from the circulation. 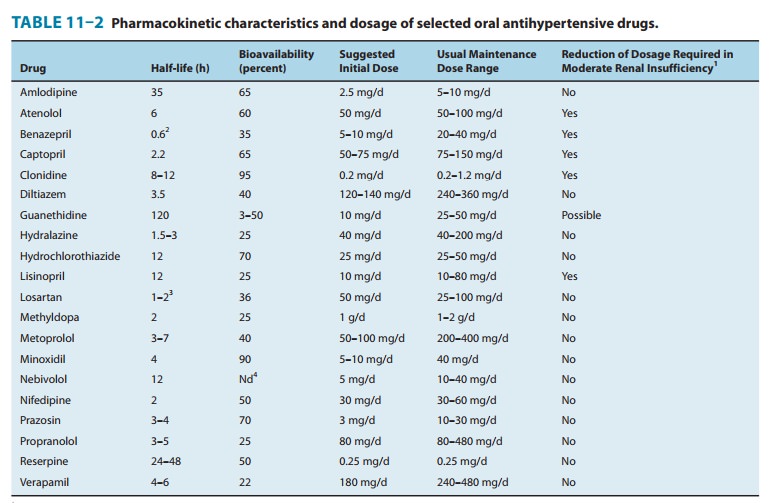 The most common undesirable effect of methyldopa is sedation, particularly at the onset of treatment. With long-term therapy, patients may complain of persistent mental lassitude and impaired mental concentration. Nightmares, mental depression, vertigo, and extrapyramidal signs may occur but are relatively infrequent. Lactation, associated with increased prolactin secretion, can occur both in men and in women treated with methyldopa. This toxicity is probably mediated by inhibition of dopaminergic mechanisms in the hypothalamus.

Other important adverse effects of methyldopa are develop-ment of a positive Coombs test (occurring in 10–20% of patients undergoing therapy for longer than 12 months), which sometimes makes cross-matching blood for transfusion difficult and rarely is associated with hemolytic anemia, as well as hepatitis and drug fever. Discontinuation of the drug usually results in prompt rever-sal of these abnormalities.