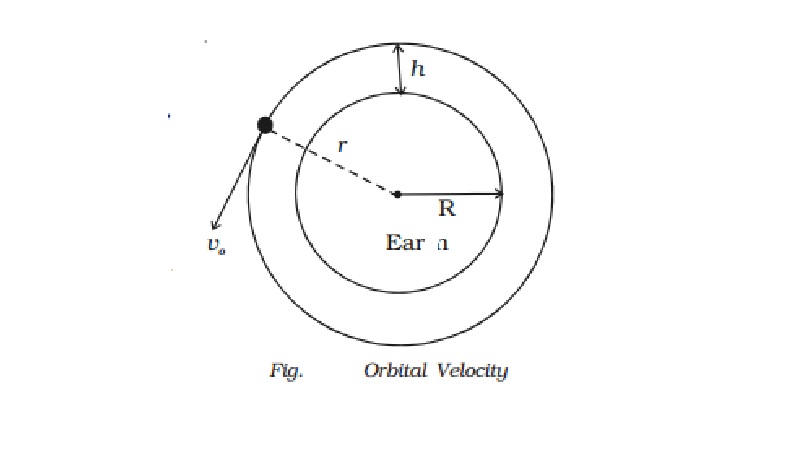 Artificial satellites are made to revolve in an orbit at a height of few hundred kilometres. At this altitude, the friction due to air is negligible. The satellite is carried by a rocket to the desired height and released horizontally with a high velocity, so that it remains moving in a nearly circular orbit. 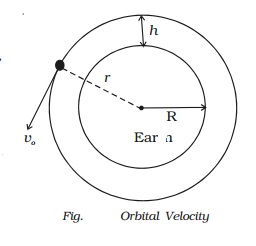 The horizontal velocity that has to be imparted to a satellite at the determined height so that it makes a circular orbit around the planet is called orbital velocity.

Let us assume that a satellite of mass m moves around the Earth in a circular orbit of radius r with uniform speed vo. Let the satellite be at a height h from the surface of the Earth. Hence, r = R+h, where R is the radius of the Earth.

The gravitational force between the Earth and the satellite is

For the stable orbital motion,

If the satellite is at a height of few hundred kilometers (say 200 km), (R+h) could be replaced by R.

Time period of a satellite

Time taken by the satellite to complete one revolution round the Earth is called time period.

where r is the radius of the orbit which is equal to (R+h).

If the satellite orbits very close to the Earth, then h << R

Energy of an orbiting satellite

If m is the mass of the satellite, its potential energy is,

where M is the mass of the Earth. The satellite moves with an orbital velocity of vo = root[GM/(R+h)]

Hence, its kinetic energy is,

The total energy of the satellite is, E = EP + EK

The negative value of the total energy indicates that the satellite is bound to the Earth.

For a satellite to appear fixed at a position above a certain place on the Earth, its orbital period around the Earth must be exactly equal to the rotational period of the Earth about its axis.

The speed of the satellite in its orbit is

The centripetal force is F = mv2/r

The gravitational force on the satellite due to the Earth is

If a satellite is parked at this height, it appears to be stationary. Three satellites spaced at 120o intervals each above Atlantic, Pacific and Indian oceans provide a worldwide communication network.

The polar satellites revolve around the Earth in a north−south orbit passing over the poles as the Earth spins about its north - south axis.

Communication satellites are used to send radio, television and telephone signals over long distances. These satellites are fitted with devices which can receive signals from an Earth - station and transmit them in different directions.

Weather satellites are used to photograph clouds from space and measure the amount of heat reradiated from the Earth. With this information scientists can make better forecasts about weather. You  might have seen the aerial picture of our country taken by the satellites, which is shown daily in the news bulletin on the television and in the news papers.

Collecting of information about an object without physical contact with the object is known as remote sensing. Data collected by the remote sensing satellities can be used in agriculture, forestry, drought assessment, estimation of crop yields, detection of potential fishing zones, mapping and surveying.

These satellites help navigators to guide their ships or planes in all kinds of weather.