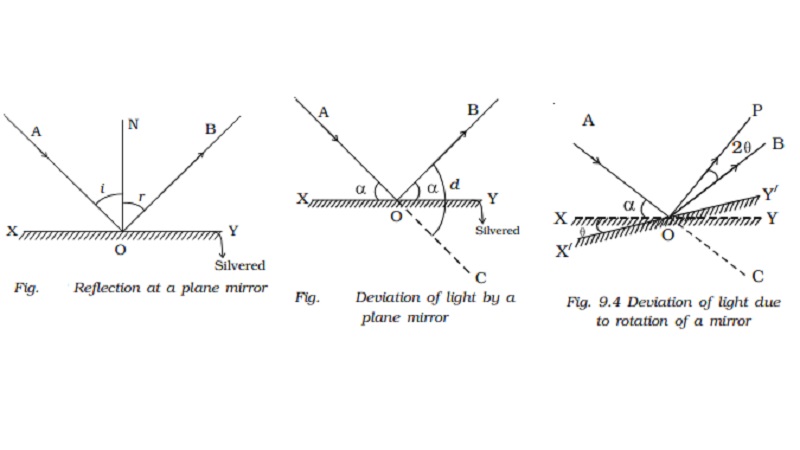 Highly polished metal surfaces reflect about 80% to 90% of the light incident on them. Mirrors in everyday use are therefore usually made of depositing silver on the backside of the glass.

Highly polished metal surfaces reflect about 80% to 90% of the light incident on them. Mirrors in everyday use are therefore usually made of depositing silver on the backside of the glass. The largest reflector in the world is a curved mirror nearly 5 metres across, whose front surface is coated with aluminium. It is the hale Telescope on the top of Mount Palomar, California, U.S.A. Glass by itself, will also reflect light, but the percentage is small when compared with the case of silvered surface. It is about 5% for an air-glass surface.

(i) The incident ray, the reflected ray and the normal drawn to the reflecting surface at the point of incidence, all lie in the same plane.

(ii) The angle of incidence is equal to the angle of reflection. (i.e) i = r.

These are called the laws of reflection. 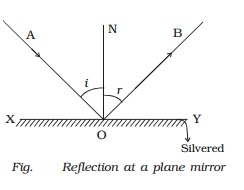 2.Deviation of light by plane mirror

BOY made by the reflected ray OB with the mirror is also equal to α.

The light has been deviated from a direction AO to a direction OB. Since angle COY = angle AOX, it follows that angle of deviation, d = 2α

So, in general, the angle of deviation of a ray by a plane mirror or a plane surface is twice the glancing angle. 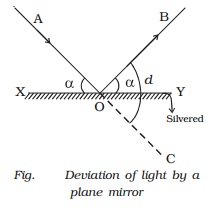 3.Deviation of light due to rotation of a mirror

Let us consider a ray of light AO incident on a plane mirror XY at O. It is reflected along OB. Let α be the glancing angle with XY (Fig.). We know that the angle of deviation COB = 2α.

Suppose the mirror is rotated through an angle θ to a position X′Y′. 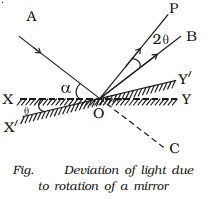