The interesting applications of Parabola involve their use as reflectors and receivers of light or radio waves. For instance, cross sections of car headlights, flashlights are parabolas wherein the gadgets are formed by the paraboloid of revolution about its axis. The bulb in the headlights, flash lights is located at the focus and light from that point is reflected outward parallel to the axis of symmetry (Fig. 5.60) while Satellite dishes and field microphones used at sporting events, incoming radio waves or sound waves parallel to the axis that are reflected into the focus intensifying the same (Fig. 5.59). Similarly, in solar cooking, a parabolic mirror is mounted on a rack with a cooking pot hung in the focal area (Fig. 5.1). Incoming Sun rays parallel to the axis are reflected into the focus producing a temperature high enough for cooking.

Parabolic arches are the best stable structures also considered for their beauty to name a few, the arches on the bridge of river in Godavari, Andhra Pradesh, India, the Eiffel tower in Paris, France. 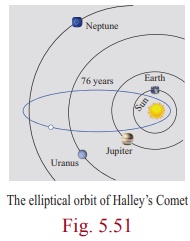 Elliptic arches are often built for its beauty and stability. Steam boilers are believed to have greatest strength when heads are made elliptical with major and minor axes in the ratio 2:1.

In Bohr-Sommerfeld theory of the atom electron orbit can be circular or elliptical. Gears are sometimes (for particular need) made elliptical in shape. (Fig. 5.52)

The shape of our mother Earth is an oblate spheroid i.e., the solid of revolution of an ellipse about its minor axis, bulged along equatorial region and flat along the polar region.

The property of ellipse, any ray of light or sound released from a focus of the ellipse on touching the ellipse gets reflected to reach the other focus (Fig. 5.62), which could be proved using concepts of incident rays and reflected rays in Physics.

An exciting medical application of an ellipsoidal reflectors is a device called a Lithotripter (Fig. 5.4 and 5.63) that uses electromagnetic technology or ultrasound to generate a shock wave to pulverize kidney stones. The wave originates at one focus of the cross-sectional ellipse and is reflected to the kidney stone, which is positioned at the other focus. Recovery time following the use of this technique is much shorter than the conventional surgery, non-invasive and the mortality rate is lower.

Some Comets travel in hyperbolic paths with the Sun at one focus, such comets pass by the Sun only one time unlike those in elliptical orbits, which reappear at intervals.

We also see hyperbolas in architecture, such as Mumbai Airport terminal (Fig. 5.53), incross section of a planetarium, an locating ships (Fig. 5.54), or a cooling tower for a steam or nuclear power plant. (Fig. 5.5) 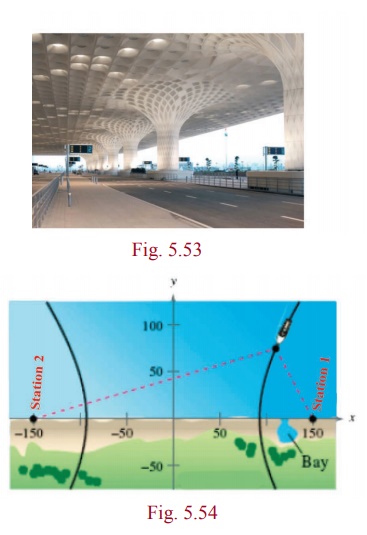 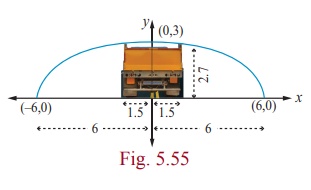 Since the truck’s width is 3m , to determine the clearance, we must find the height of the archway 1.5m  from the centre. If this height is 2.7m or less the truck will not clear the archway.

The edge of the 3m wide truck corresponds to x = 1.5m from centre We will find the height of the archway 1.5m  from the centre by substituting x = 1.5 and solving for y 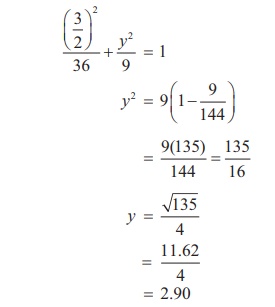 Thus the height of arch way 1.5m from the centre is approximately 2.90m . Since the truck’s height is 2.7m , the truck will clear the archway.

The maximum and minimum distances of the Earth from the Sun respectively are 152 ×106 km and 94.5×106 km. The Sun is at one focus of the elliptical orbit. Find the distance from the Sun to the other focus. 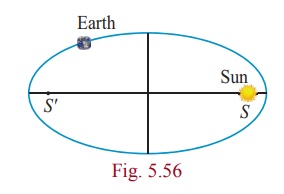 From the graph the vertex is at (0, 0) and the parabola is open down 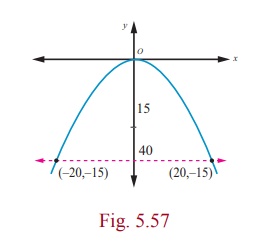 Equation of the parabola is x2 = −4ay 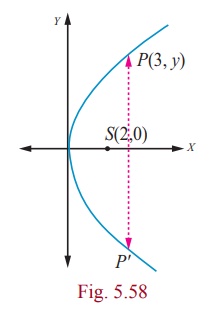 Let P be a point on the parabola whose x -coordinate is 3m from the vertex P (3, y)

The equation y = (1/32) x2 models cross sections of parabolic mirrors that are used for solar energy. There is a heating tube located at the focus of each parabola; how high is this tube located above the vertex of the parabola? 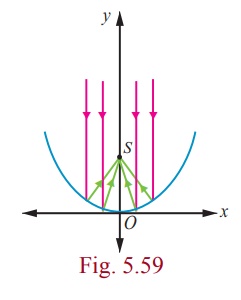 Equation of the parabola is

A search light has a parabolic reflector (has a cross section that forms a ‘bowl’). The parabolic bowl is 40 cm wide from rim to rim and 30 cm deep. The bulb is located at the focus .

(1) What is the equation of the parabola used for reflector?

(2) How far from the vertex is the bulb to be placed so that the maximum distance covered? 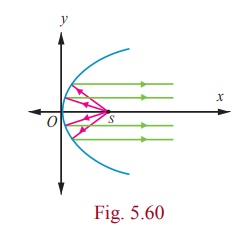 The equation of the parabola is 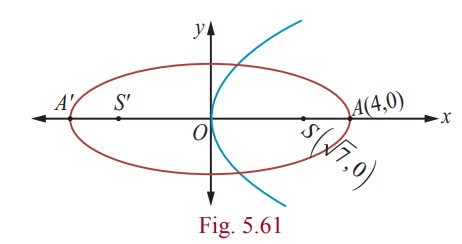 5. Reflective Property of an Ellipse

The lines from the foci to a point on an ellipse make equal angles with the tangent line at that point (Fig. 5.62).

The light or sound or radio waves emitted from one focus hits any point P on the ellipse is received at the other focus (Fig. 5.63).

A room 34m long is constructed to be a whispering gallery. The room has an elliptical ceiling, as shown in Fig. 5.64. If the maximum height of the ceiling is 8m , determine where the foci are located.

The length a of the semi major axis of the elliptical ceiling is 17m . The height b of the semi minor axis is 8m . Thus 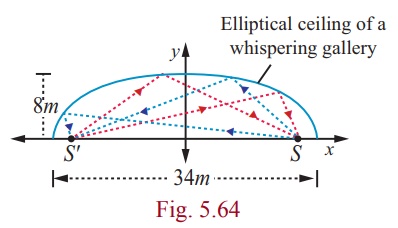 For the elliptical ceiling the foci are located on either side about 15m from the centre, along its major axis.

If the equation of the ellipse is

( x and y are measured in centimeters) where to the nearest centimeter, should the patient’s kidney stone be placed so that the reflected sound hits the kidney stone?

The equation of the ellipse is 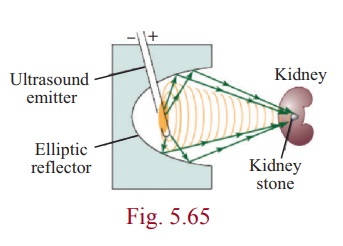 The origin of the sound wave and the kidney stone of patient should be at the foci in order to crush the stones.

Therefore the patient’s kidney stone should be placed 20.5cm from the centre of the ellipse.

6. Reflective Property of a Hyperbola

The lines from the foci to a point on a hyperbola make equal angles with the tangent line at that point (Fig. 5.66). 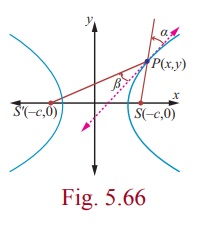 The light or sound or radio waves directed from one focus is received at the other focus as in the case ellipse (Fig. 5.54) used in spotting location of ships sailing in deep sea.

Two coast guard stations are located 600 km apart at points A(0, 0) and B(0, 600) . A distress signal from a ship at P is received at slightly different times by two stations. It is determined that the ship is 200 km farther from station A than it is from station B . Determine the equation of hyperbola that passes through the location of the ship.

Since the centre is located at (0, 300) , midway between the two foci,which are the coast guard stations, the equation is 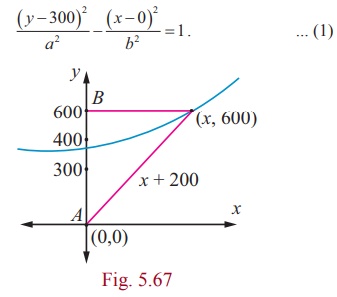 To determine the values of a and b , select two points known to be on the hyperbola and substitute each point in the above equation.

Thus the required equation of the hyperbola is

The ship lies somewhere on this hyperbola. The exact location can be determined using data from a third station. 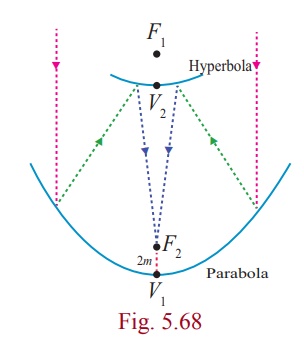