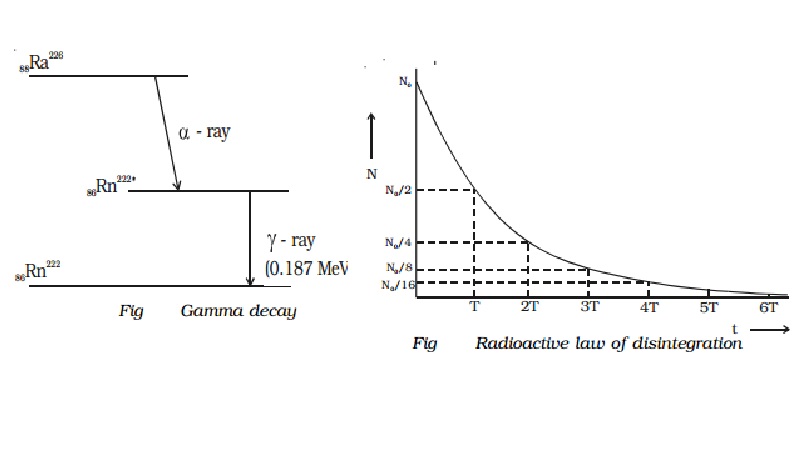 When a radioactive nucleus disintegrates by emitting a β− particle, the atomic number increases by one and the mass number remains the same. β−decay can be expressed as

At a time, either α or β−particle is emitted. Both α and β particles are not emitted during a single decay.

When a radioactive nucleus emits γ−rays, only the energy level of the nucleus changes and the 88 atomic number and mass number remain the same.

During α or β−decay, the daughter nucleus is mostly in the excited state. It comes       to ground state with the emission of γ−rays.

Example : During the radioactive disintegration of radium (88Ra226) into radon (86Rn222), gamma ray of energy 0.187 MeV is emitted, when radon returns from the excited state to the ground state (Fig.) 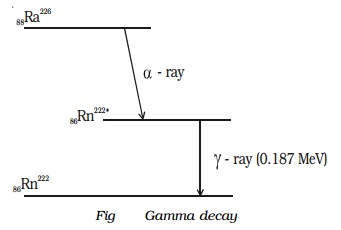 where λ is a constant known as decay constant or disintegration constant. The negative sign indicates that N decreases with increase in time.

Equation (1) can be written as

where C is a constant of integration. 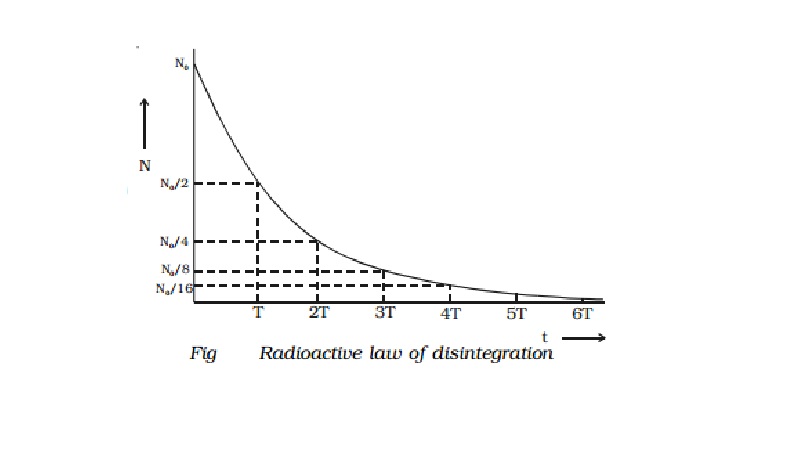 Initially the disintegration takes place at a faster rate. As time increases, N gradually decreases exponentially. Theoretically, an infinite time is required for the complete disintegration of all the atoms.

Since all the radioactive elements have infinite life period, in order to distinguish the activity of one element with another, half life period and mean life period are introduced.

From the law of disintegration

The half life period is inversely proportional to its decay constant. The concept of half time period can be understood from Fig..

When the radioactive substance is undergoing disintegration, the atom which disintegrates at first has zero life and that disintegrates at last has infinite life. The actual life of each atom ranges from zero to infinity.

The mean life of a radioactive substance is defined as the ratio of total life time of all the radioactive atoms to the total number of atoms in it.

The half life and mean life are related as

The activity of a radioactive substance is defined as the rate at which the atoms decay. If N is the number of atoms present at a certain time t, the activity R is given by