Library clones can sometimes be unreliable because large cloned segments may actually consist of two fragments of DNA, from different parts of the genome, inserted into the same vector.

Library clones can sometimes be unreliable because large cloned segments may actually consist of two fragments of DNA, from different parts of the genome, inserted into the same vector. Radiation hybrid mapping overcomes these limitations by examining STSs or ESTs on original chromosomal fragments (Fig. 8.7). To generate these, cultured human cells are treated with x-rays or γ-rays to fragment the chromosomes. The radiation dosage controls how often the chromosome breaks, and thus the average length of the fragments. The human cells possess a marker enzyme that allows them to grow on selective media. After irradiation, the human cells are fused to cultured hamster cells using polyethylene glycol or Sendai virus. The hamster cells do not have the selective marker. Consequently, only those hamster cells that fuse with human cells survive. The fragments of human chromosomes become part of the hamster nucleus, and the individual hybrid cell lines can be examined by STS or EST mapping. Because the average fragment length is known, these maps determine relative distance between two markers. 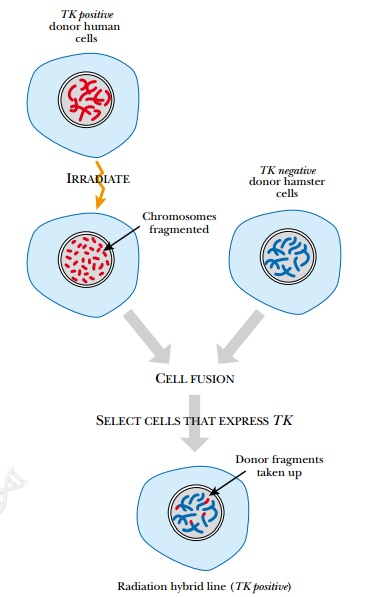 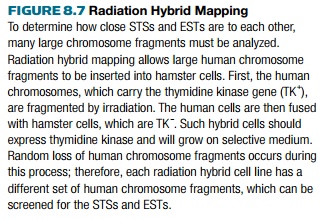 Cytogenetic mapping is another physical technique that uses original chromosomes. When chromosomes are placed on microscope slides and stained, they form banding patterns that are visible under a light microscope. This cytogenetic map shows where a gene or marker lies relative to the stained bands (Fig. 8.8). Cytogenetic maps are very low resolution compared with the other mapping techniques, yet they are useful to compare gene locations on a large scale.