Measuring whether a gene is transcribed into mRNA is the first step to deciding whether or not a presumed gene is real. Gene expression was traditionally done on a single gene basis, but now, functional genomics studies gene expression using the entire genome.

As noted earlier, one of the major issues in determining the correct number of genes is deciding whether or not a sequence is really a gene. Measuring whether a gene is transcribed into mRNA is the first step to deciding whether or not a presumed gene is real. Gene expression was traditionally done on a single gene basis, but now, functional genomics studies gene expression using the entire genome. Functional genomics encompasses the global study of all the RNA transcribed from the genome—the transcriptome, all the proteins encoded by the genome—the proteome; and all the metabolic pathways in the organism—the metabolome.

Because the entire human genome contains only around 25,000 different genes, using microarray technology to study gene expression is feasible. DNA microarrays, or DNA chips, contain thousands of different unique sequences bound to a solid support, such as a glass slide. Microarrays are based on the principle of hybridization between a “probe” and target molecules in the experimental sample. However, in a microarray the probes are attached to the solid support and the experimental sample is in solution. The microarray represents the genome of the organism being tested and consists of sequences corresponding to each gene in the organism.

To monitor gene expression, RNA extracted from a cell sample is tested against a microarray. The experimental RNA sample is usually fluorescently tagged. Hybridization of the mRNA from the experimental sample to the DNA probes on the solid support indicates whether or not a gene is expressed and to what degree. The level of fluorescence at each point on the array correlates with the level of the corresponding mRNA in the sample. 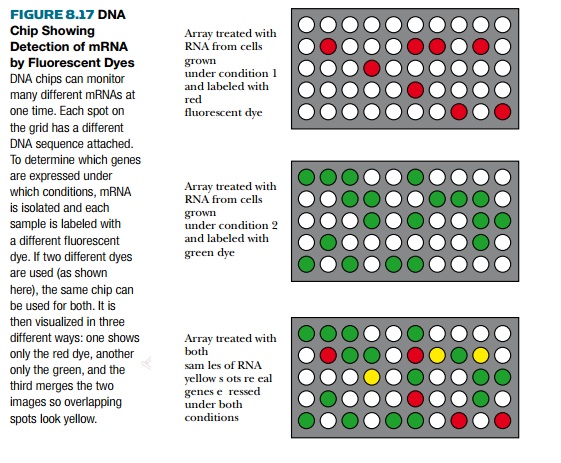 Microarrays can be used to hybridize to RNA isolated from cells grown under a variety of experimental conditions—for example, heat shock, cancer, or other disease states. The same array can be hybridized to two or even more samples of RNA (control versus experimental), thus comparing gene expression. For this comparison, each RNA sample is labeled with a different fluorescent dye, for example, red and green. If a particular RNA is present in only one of the samples,

the corresponding spot on the microarray will be red or green (Fig. 8.17), whereas, if that particular RNA is present in both experimental and control samples, the spot will be yellow (i.e., red plus green). Modern arrays can accommodate thousands or millions of different probes, allowing the entire genome for most organisms to be examined at once. Some arrays are clustered so that all the genes involved in protein synthesis are together, or the genes involved with heat shock are clustered. The computer reads the color and fluorescence intensity for each of the spots and carries out an analysis. 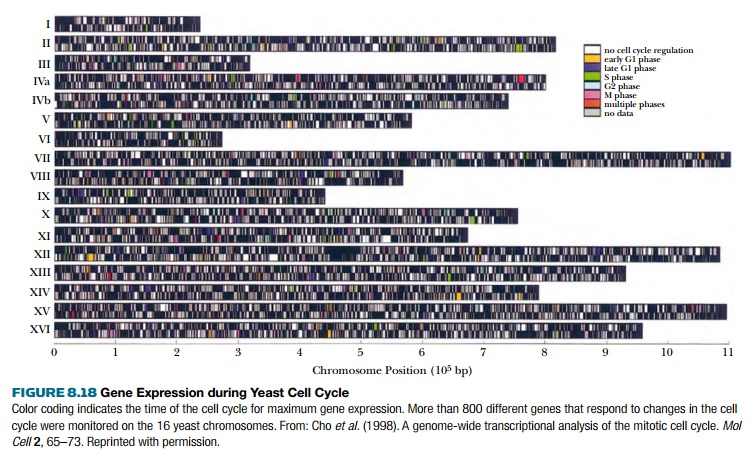 The results can provide a global view of gene expression in different experimental conditions. This powerful technique allows the researcher to analyze thousands to millions of sequences at one time. For example, slides can be made with every named gene from the yeast genome. These genes may be analyzed for expression at different stages of the cell cycle. Thus, a culture of yeast can be synchronized and arrested at different stages of the cell cycle by adding α factor or by using mutant yeast that freeze at particular stages of mitosis. The gene expression patterns for each stage are compared and compiled (Fig. 8.18).