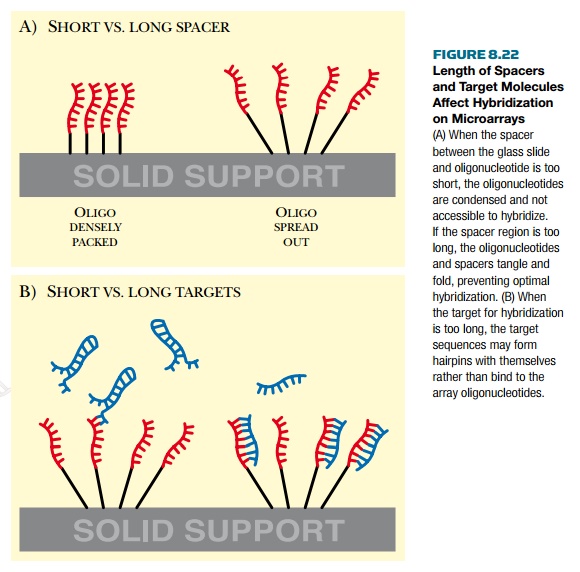 Hybridization of two lengths of DNA (or RNA with DNA) requires certain sequence features. One important property is the relative number of A:T base pairs versus G:C base pairs. Because G:C base pairs have three hydrogen bonds holding them together, it takes more energy to dissolve the bonds. A:T base pairs have only two hydrogen bonds and require less energy. Thus more GC base pairs give stronger hybridization. If the sequence has many A:T base pairs, the duplex may form slowly and be less stable. Another important consideration is secondary structure. If the probe sequence can form a hairpin structure, it will hybridize poorly with the target. If the probe has several mismatches relative to the target, the duplex may not form efficiently. All these issues must be addressed when making an oligonucleotide microarray. Computer programs are available that identify suitable regions of genes with sequences that will produce effective probes.

cDNA arrays are less prone to the problems seen in oligonucleotide arrays. cDNAs are double- stranded, so secondary structures such as hairpins are less likely to be a problem. During a hybridization reaction, cDNA arrays must be denatured either with heat or chemicals, making the probes single-stranded. Then the single-stranded RNA samples are allowed to hybridize on the slide under conditions that promote duplex RNA:cDNA without any mismatches.