Genomes are sequenced by making libraries of genomic DNA segments and then sequencing each of the segments. These stretches must then be compiled into the final sequence.

Genomes are sequenced by making libraries of genomic DNA segments and then sequencing each of the segments. These stretches must then be compiled into the final sequence. To structure the sequence data into a draft genome, the Human Genome Project started by compiling a working genome map. Genome maps provide various landmarks for use when putting together sequence data. There are two different categories for genome maps, genetic maps and physical maps. Genetic maps are based on the relative order of genetic markers, but the actual distance between the markers is hard to determine. Physical maps are more precise and give the distance between markers in base pairs.

Traditional genetic maps are based on the recombination frequency between genes.

Genetic maps are based on landmarks called genetic markers. Many different types of markers can be used. The order of these markers is determined by how often the two markers are found in offspring. The most useful markers are genes, but often in large genomes, genuine genes are too few and far between to give a good map. Genes that encode specific traits are wonderful markers in organisms such as Drosophila because mating can be controlled and directed. After mating many different flies, the number of flies with both markers can be determined. The more often the markers appear together in the offspring, the closer these are in the genome. In humans, deliberate mating experiments are unethical. Moreover, the human genome contains only a few percent of coding DNA; thus, using real genes does not produce enough points on the map. A sparse map makes it difficult to order the sequences obtained in the genome sequencing project. Therefore, other markers, including physical markers, are also used on genomic maps.

An example of a physical marker is the RFLP, or restriction fragment length polymorphism. RFLPs are commonly used because of the ease of identification. For small genomes such as yeast, monitoring the frequency of recombination between two RFLP markers is easy. Diploid yeast cells undergo meiosis and form four haploid cells called a tetrad. Each of these haploid cells can be isolated, grown into many identical clones, and examined individually. Thus each RFLP marker can be followed easily from one generation to the next. In humans, following such markers is more challenging, but studies on groups of closely related people, such as large families or small cultures like the Amish, have allowed some RFLPs to be followed in this manner (Fig. 8.1). 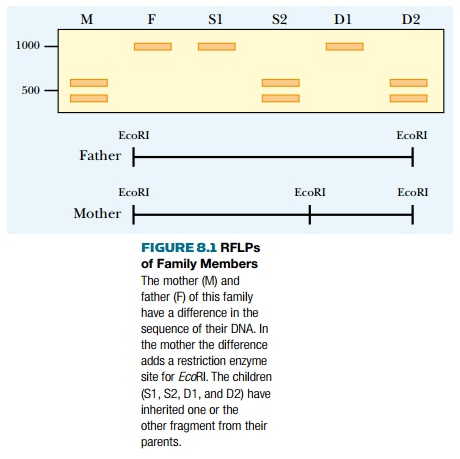 Another marker used for making genetic maps is the VNTR, or variable number tandem repeat (Fig. 8.2). These sequence anomalies occur naturally in the genome and consist of tandem repeats of 9 to 80 base pairs in length. The number of repeats differs from one person to the next; therefore, these can be used as specific markers on a genetic map. They can also be used to identify individuals in forensic medicine or paternity testing. Some repeats are found in many different locations throughout the genome and cannot be used for making genetic maps, but other repeat sequences are found only in one unique location. 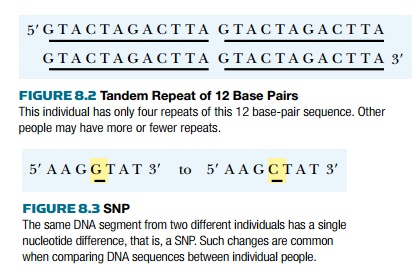 A fourth type of genetic marker used in mapping is the SNP (pronounced “snip”), or single nucleotide polymorphism (Fig. 8.3). SNPs are individual substitutions of a single nucleotide that do not affect the length of the DNA sequence. These changes can be found within genes, in regulatory regions, or in noncoding DNA. When found within the coding regions of genes SNPs may alter the amino acid sequence of the protein. This in turn may affect protein function. If a SNP correlates with a genetic disease, identifying that SNP may diagnose the disease before symptoms appear. When a SNP falls within a restriction enzyme site, it coincides with an RFLP.