Genome sequencing has expanded the field of molecular phylogenetics, which is the study of evolutionary relatedness using DNA and protein sequences.

Genome sequencing has expanded the field of molecular phylogenetics, which is the study of evolutionary relatedness using DNA and protein sequences. Comparing sequences from different organisms shows the number of changes that have occurred over millions of years. All cellular organisms, including bacteria, plants, and animals, have ribosomal RNA. These sequences can be compared and the differences can be used to determine the relatedness of different organisms. This system is less subjective than using physical characters for taxonomy. The cladistic approach assumes that any two organisms ultimately derive from the same common ancestor (if we go far enough back) and that at some point bifurcation, or separation into two clades, occurred in their line of descent. The difference between

the two organisms indicates how long ago the split occurred. Taxonomy may be based on visible characteristics—that is, the phenotype. This approach works well, at least to a first approximation, in organisms with plenty of obvious features, such as mammals and plants. But in organisms such as bacteria, the method falls apart. However, molecular phylogenetics has opened the door to making family trees for every organism.

When using molecular data to study relatedness, it is essential that the sequences be correct and truly have come from the organisms under study. This can be complicated in the human genome because some sequences have been derived from other organisms, such as viruses or bacteria. This problem applies to all organisms, to some extent. For example, many bacterial genomes contain inserted bacteriophage genomes. Another important point is to ensure that sequences being compared are truly homologous, that is, they have all descended from one shared ancestral sequence. When gene sequences are compared, they are aligned, so that the regions of highest similarity correspond (Fig. 8.13).

This type of alignment can determine the relatedness of two or more proteins or genes. The relatedness can be represented graphically by drawing phylogenetic trees. The tree has various features: a root, nodes, and branches (Fig. 8.14). The root represents the overall common ancestor, and the branching indicates the bifurcations or separations that occurred during evolution. 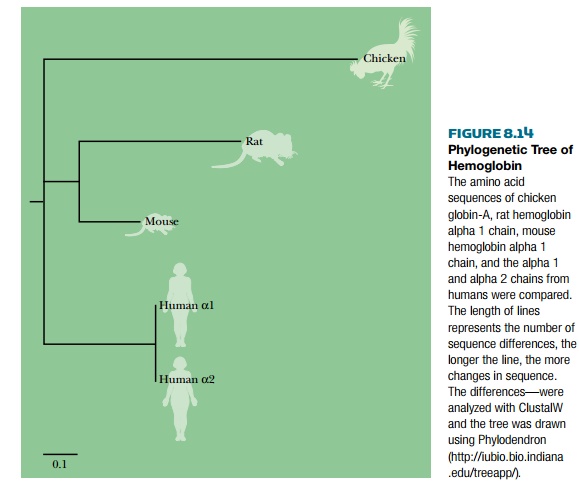 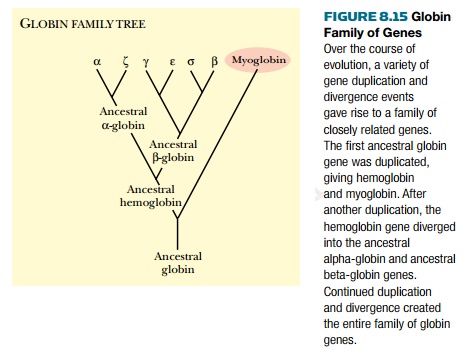 Based on alignments, genes have been grouped into families, groups of closely related genes that arose by successive duplication and divergence. Gene superfamilies occur when the functions of the various genes have steadily diverged until some are hard to recognize. For example, the transporter superfamily encompasses many proteins that transport molecules across biological membranes. This superfamily has members that transport sugars into bacteria, transport water into human cells, and even export antibiotics out of bacteria. They are found in almost all organisms. Another gene superfamily is the globin family (Fig. 8.15). The family includes myoglobin and hemoglobin from different organisms. These proteins all carry oxygen bound to iron, but myoglobin is specific to muscle cells whereas hemoglobin is specific to blood. The theory is that early in evolution one gene for an ancestral globin existed. At some point this gene was duplicated and the copies diverged so that one was specialized for blood and the other for muscle. Hemoglobin itself also diverged later into different forms, each used at various stages of development.

New genes may be generated one at a time, but in addition, whole chromosomes or genomes may be duplicated. In some organisms, particularly plants, genome duplications are relatively stable and have occurred quite often. An example is the modern wheat plant. Its ancestor was a typical diploid, but modern wheat used to make flour is tetraploid. The wheat used to make pasta, durum wheat, is hexaploid and is derived from three different ancestral plants. These varieties arose by natural mutation and were exploited because of the higher protein content and better yield.

The rate of mutation can vary greatly between different genes. Although the human genome undergoes a steady average rate of mutation, individual genes may mutate at different rates. Essential proteins evolve or mutate more slowly than average. Conversely, the less critical a gene is for survival, the more mutations can be tolerated and the protein evolves more rapidly. Thus, the gene for cytochrome c, an essential component in the electron transport chain, has incorporated only 6.7 changes per 100 amino acids in 100 million years. In contrast, fibrinopeptides, which are involved in blood clotting, have had 91 mutations per 100 amino acids in 100 million years. As noted earlier, ribosomal RNA is useful to establish family trees for distantly related organisms. It is found in every organism and is essential to survival; therefore, it is slow to evolve.

What happens if a scientist wants to classify organisms that are closely related? Essential gene sequences do not provide enough genetic variation to differentiate such organisms. Nonessential genes may help, but sometimes even these are too close. In such cases, the wobble position of coding regions or even noncoding regions may be used. As noted in Previews pagees, the wobble position is the third nucleotide of a codon. The same amino acid is often encoded by several codons, which vary only in this third base. Alterations at this position usually have no net effect on protein function or structure and may occur between very closely related species or between individuals of the same species.

Mitochondrial or chloroplast genomes are also compared in order to determine the relatedness of organisms. These accumulate mutations at a higher rate than the nuclear genomes in the same organisms. The organelle genomes vary particularly in the noncoding regions. One drawback to using organelle genomes is that mitochondria and chloroplasts are inherited maternally and thus trace the evolutionary lineage only on the maternal side.