Whole-genome tiling arrays (WGAs) are oligonucleotide microarrays that cover the entire genome. The first entire genome to be represented by a whole-genome array was from Arabidopsis.

Whole-genome tiling arrays (WGAs) are oligonucleotide microarrays that cover the entire genome. The first entire genome to be represented by a whole-genome array was from Arabidopsis. A gene chip was designed to have 25-mer oligonucleotides that overlapped each other and covered the entire sequence of the genome. Complementary oligonucleotide sequences were tiled back to back along each entire chromosome and ordered so that the array could be conveniently analyzed for gene expression (Fig. 8.23). 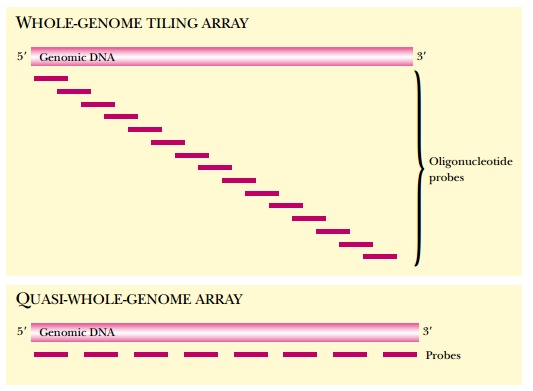 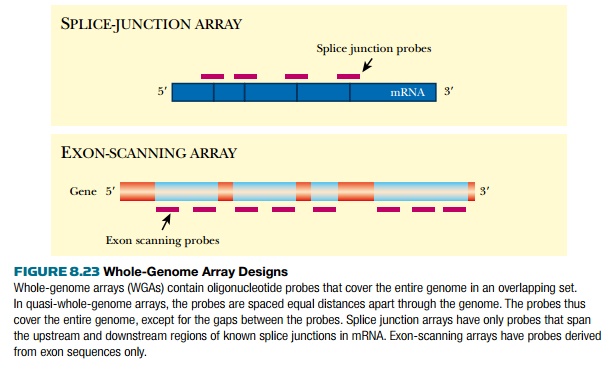 For the human genome, tiling arrays have been made to cover the entire sequences of chromosomes 21 and 22. These also use 25-mer oligonucleotides, but rather than being overlapped, the oligonucleotides were spaced 35 base pairs apart along the sequence.

These are therefore strictly only “quasi-whole-genome arrays.” Compared to arrays that include only known genes, tiling arrays have the potential to identify novel regions that are transcribed, whether these encode unknown protein-encoding genes or nontranslated RNA. The RNA extracted from many different cell lines and tissues has been used to monitor gene expression, assess differences in splicing patterns, find new genes, and find RNA-binding protein target sequences.

The most interesting finding from studying human chromosomes 21 and 22 is that much larger portions of these chromosomes are transcribed into mRNA than previously predicted from computer analyses of exon regions. About 90% of the transcribed regions occurred outside the known exons. The majority of the transcribed regions generated noncoding RNA, mostly of less than 75 base pairs in length. This suggests that noncoding RNA may have a much greater role in human biology than previously thought. These arrays have also identified new exons that were previously unknown. In addition, these arrays can identify novel alternatively spliced proteins. The WGAs for chromosomes 21 and 22 have also been used to compare the level of expression of exons within the same gene. About 80% of the genes had exons with varied levels of expression, implying most genes have some sort of alternate splicing.

The entire procedure, including the analysis on a gene chip, is called ChIP-chip. This type of analysis can precisely identify transcription factor binding sites on a variety of genes. Curiously, binding locations for NF-κB, for example, have been found within both coding and noncoding regions, such as introns or the 3′ ends of genes. These surprising findings suggest that transcription factors may also function outside of the traditional upstream promoter region.

Another use for WGA is to identify regions of the genome that are methylated. Methylation prevents the inappropriate expression of various genes, especially those used only during development of young organisms, or those genes from transposons or viruses that could be detrimental. Cancerous cells have methylation patterns much different from those of normal cells, suggesting that this type of regulation is critical to proper growth control of normal cells. In order to identify the methylated regions, genomic DNA is first treated with sodium bisulfite, which deaminates nonmethylated cytosine to uracil, yet does not affect methylated cytosine. The treated DNA is then hybridized to a WGA. Those regions with nonmethylated cytosine no longer hybridize to the array because the cytosines have been converted to uracil (which pairs with A, not G). Those regions of the genome that are methylated still hybridize well because methylated cytosine and guanine form a stable base pair.

Of course, finding genetic variations and polymorphisms is critical to genome analysis, and whole-genome arrays offer a nonbiased method to analyze samples. In fact, a WGA that has the reference sequence for the human genome can be used to identify and catalogue all different types of polymorphisms, including SNPs, VNTRs, and repetitive elements. In fact, an overlapping WGA made to the entire reference sequence of the human genome spaced at a single base pair could be used to effectively resequence the entire genome with ease and speed.