It’s a pretty good bet that if Martian psychologists camedown (or is it “up”?) to Earth to investigate its creatures, they wouldn’t immediately pick out the humans as being an especially remarkable example.

It’s a pretty good bet that if Martian psychologists camedown (or is it “up”?) to Earth to investigate its creatures, they wouldn’t immediately pick out the humans as being an especially remarkable example. After all, we don’t have the lion’s magnificent mane, the soaring flight of the eagle, the peacock’s extrav-agant feathers, the elephant’s impressive bulk or the shark’s rapacious bite. In fact, ours seems a rather unspectacular species—dull of tooth and short of claw, awk-wardly bobbing along on two legs with our patchy coats and pointy noses. We don’t even have whiskers or tails.

But we humans have one unique glory that apes can’t ape, crows can’t crow about, and parrots can only parrot. We have the gift of language, and we have always under-stood the power it conveys, allowing us to leapfrog beyond the other creatures. As the Bible puts it, “The man gave names to all the cattle, and to the birds of the sky, and to every beast of the field” while even the most linguistically gifted animals can muster little more language than “Give me bananas,” “D’oh! Snake!” and “Hey there, pal!” Echoing the Bible’s words, the 17th-century philosopher René Descartes wrote that language is the mental function that sets us apart from all other beasts and is “the sole sign and only certain mark of thought hidden and wrapped up in the body” (Figure 10.1). 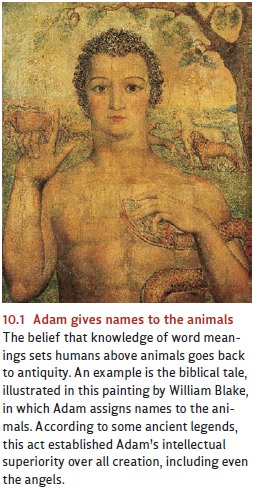 Today, scientific opinion continues to give the same prominence to language that our forebears did, recognizing it as a crucial cornerstone of human mental life.

Armed with language, we not only can name all the things and creatures around us. We can transcend the here-and-now that surrounds and confines the mentality of all other animals. We can build bridges between the actual and the impossible; the con-crete and the abstract; the physical and the mental; the past, present, and future; the ordinary and the sublime and, last but not least, with words and sentences we fashion a mental bridge between your brain and mine. Going on to recraft our language into squiggles and scratches on clay or stone or paper, we can store our thoughts forever, sending them down through time to generations of humankind as yet unborn.

In these ways and more, language obviously serves the crucial purpose of con-veying information and ideas from person to person and from generation to gener-ation. Yet the role of language in human life lies yet deeper than this. Conversation is embedded in the fundamental social fabric of our species’ existence, starting to show itself even in infants a few months old and thus too young to sit up unaided or feed themselves, no less to understand any meaningful word. All the same, these smallest members of the human race have the rudimentary rhythms and tones of language stored in their genes, and so they happily babble and coo away their days. And their adult caretakers babble quite meaninglessly in return as the family and community forge social bonds using the sounds of language as a central medium. As Charles Darwin writes, language is “the sweet music of our species,” the life-long vehicle of our sociality as well as the transmission medium for our deepest thoughts, beliefs, and ideas. Humans have often been defined as “the creatures who think.” One might as justly define them as “the creatures who gossip” (or who text, or who tweet).