The Social Origins of Language Learning

The Social Origins of Language Learning

Prelinguistic infants show an intense responsiveness to speech (Figure 10.19). Neonates’ heart rate quickens or slows according to whether they hear a human speaking in a tone that is excited or soothing, or disapproving versus approving. Babies do not have to learn these emotive qualities of language any more than a puppy has to learn by experience which barks or growls from other dogs are playful and which are threatening. This was shown by recording German mothers talking to their infants and then replaying the audiotape to babies who had heard only English or French up until then. The recording was presented while the baby was playing with a novel toy. When infants hear an approving German sentence uttered with its high notes and mellow cadences, they go right on playing; but on hearing the sharp and low-toned sounds of disapproval, though in a totally unfamiliar language, they drop the toy like a hot potato (Fernald, 1992). Relatedly, infants prefer to look at and accept toys from strangers who are speaking the language they have been hearing in their own (so far very brief ) lives. Remarkably, they even detect something strange if they hear strangers speaking the native language but with a foreign accent (Kinzler, Dupoux, Spelke, 2007; Figure 10.20). Kindergartners, too, say they’d rather be friends with newcomers who have familiar dialects than with other children who have foreign accents, even if the latter look more familiar by being of the same race as the child sub-jects (Kinzler, Shutts, DeJesus, & Spelke, 2009). Thus, language appears to be social and interpersonal in its very origins (E. Bates, 1976; Mandler, 2000; Tomasello, 2008) with dialect differences serving as fundamental markers for who is closest to oneself. In adulthood these same linguistic properties continue to lead to strong emo-tional judgments about “us” versus “them” which may be decisive for social grouping (M. C. Baker, 2001; Labov, 1972; Figure 10.21). 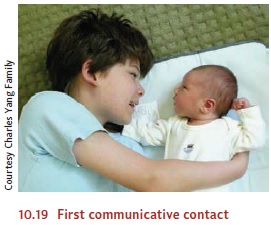 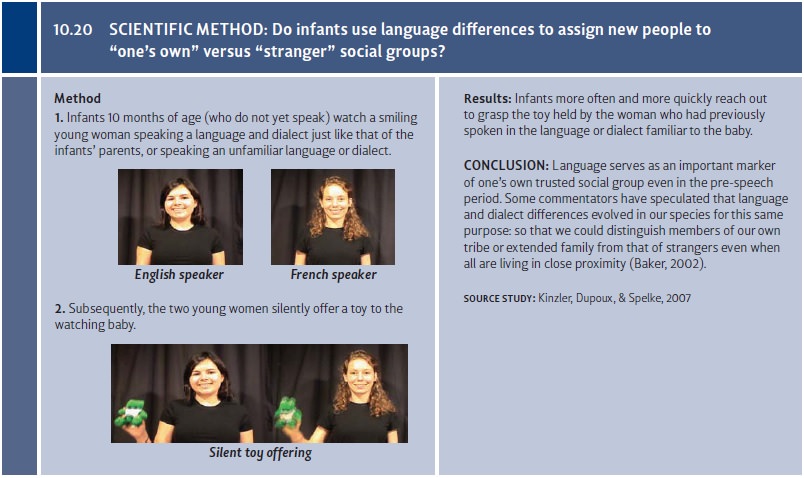 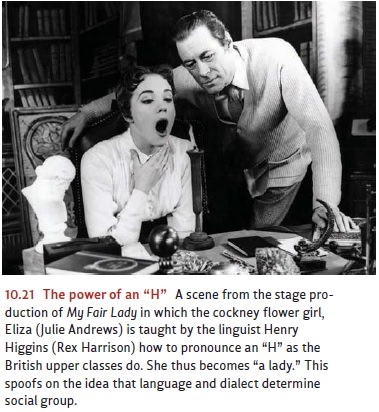