Children Exposed to More Than One Language: The Case of Bilingualism

So far we have looked at learning in less than ideal environments, particularly where the input to the learners is diminished because of isolation or disability.

Children Exposed to More Than One Language: The Case of Bilingualism

So far we have looked at learning in less than ideal environments, particularly where the input to the learners is diminished because of isolation or disability. What happens in a case that seems to be the opposite: when infants are exposed from earliest infancy to more than one language at a time, in the bilingual home? Notice that (unless bilingually reared babies sleep less!) they will hear each of the two languages only for half as much time as a monolingually reared baby hears the single language of the home. Yet remark-ably enough, the budding bilinguals learn both languages as fast and as well as the monolinguals learn one language. A 3-year-old who hears, say, Italian and Slovenian spoken about equally often at home will speak and understand both these languages like a 3-year-old rather than being like an 18-month-old for each of them (Kovelman, Shalinsky, Berens, & Petitto, 2008). From one perspective, this is just what we would predict because these babies are in “the sensitive period” during which, as we have seen, they soak up language information like little cognitive sponges. But from another per-spective, the outcome is surprising because babies and young preschoolers are known to be especially prone to confusion—to suffer interference—when trying to learn or perform two different tasks. Why don’t they fail to differentiate the two languages they are hearing, or at least mix up the words and rules from the two of them with detrimen-tal effects on language learning?

The answer seems to be that bilingual exposure in early infancy (termed crib bilin-gualism) enhances the ability to monitor and switch between competing tasks in a waythat not only supports learning the two languages, but extends to flexible switching among other tasks as well. One group of investigators demonstrated this by testing monolingual and bilingual young children in the Dimensional Change Card Sorting Task (DCCS; Zelazo, 2006). The set of cards for this task differ both by color (say, red cards and green cards) and by shape (say, square cards and oval cards). The child exper-imental participant is first asked to sort the full deck of cards on one dimension, for example, color, and later asked to re-sort them, this time by shape. Children under 4 years of age, though they easily perform either of these sorts with no difficulty, tend to slow down and to err when trying to switch in the re-sorting phase of the experiment, when they have to drop the previously valid criterion of color and sort in terms of shape, or the reverse. In the present context, it is of great interest that young children who were crib bilinguals, while no better than the monolinguals in the sorting phase of the experiment, are reliably better in the re-sorting phase. Apparently the bilingual experience—in which one must constantly inhibit everything one knows about lan-guage B when one is hearing or speaking language A—has had a general effect on devel-oping cognition. The bilingual achieves cognitive flexibility and “executive control” at an earlier than expected age (Bialystok, 1999; see also Diamond, Kirkham, & Anso, 2002). Indeed these positive effects of bilingual environments are observable even in 7-month-olds who can efficiently acquire and process incompatible linguistic patterns that their monolingual peers cannot (Kovács & Mehler, 2009; see Figure 10.33). 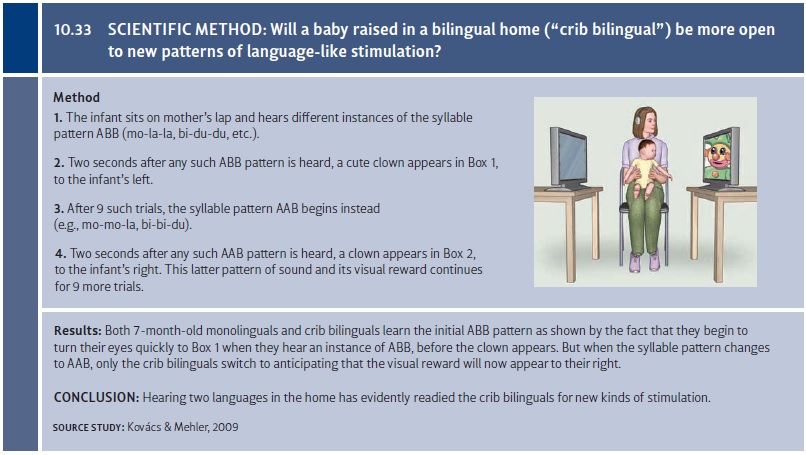 Early bilingualism also shows its positive linguistic-cognitive effects when we con-sider how young children comprehend sentences. Here again, we see failures of moni-toring and flexible switching by children as old as 8 or 9 years. For instance, when a young child hears an ambiguous sentence of the kind we discussed earlier (see Figure 10.18), she is likely to skip confidently down one garden path, in most cases never to return. This is in contrast to the adult who rapidly notices and repairs wrong or ques-tionable initial interpretations (Trueswell, Sekerina, Hill, & Logrip, 1999). For this very reason, children under 6 or 7 years of age do not “get” puns and verbal tricks like Willyou join me in a bowl of soup, for they cannot switch from one to the other structuralinterpretation (Hirsh-Pasek, Gleitman, & Gleitman, 1978). The bilingual child again has the advantage over his monolingual age-mates, a kind of cognitive control that 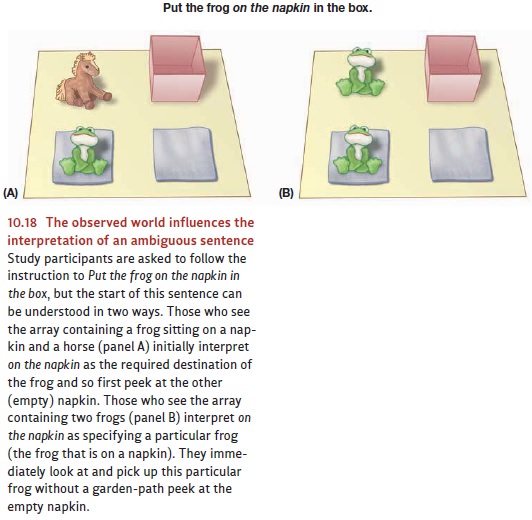 enables them to monitor, repair, and reinterpret sentences on the fly from an early age (Novick, Thompson-Schill, & Trueswell, 2008; Slobin, 1978).

We see then that the facts about early bilingualism are educational arguments for early bilingualism. There is every reason to suppose that exposing very young children to more than one language would be beneficial to cognitive growth and development. This is even leaving aside the social and economic benefits that accrue to competent multilinguals in the rapidly globalizing societies of the 21st century.