Discovering the Building Blocks of Language

Discovering the Building Blocks of Language

Neuroscientific findings show that infants are ready for language learning at birth or almost immediately thereafter. One group of investigators recorded changes in the blood flow in 2-day-old babies’ brains in the presence of linguistic stimulation. Half of the time the babies were hearing recordings of normal human speech, and the other half of the time they were hearing that speech played backward. Blood flow in the

babies’ left hemisphere increased for the normal speech but not for the backward speech (Gervain, Macagno, Cogoi, Peña, & Mehler, 2008). Because the left hemisphere of the brain is the major site for linguistic activity in humans, this evidence suggests that the special responsiveness to language-like signals is already happening close to the moment of birth (Figure 10.22).

THE RHYTHMIC FOUNDATIONS OF LANGUAGE LEARNING

Recall that languages vary in their significant sounds (phonemes and syllables), tones, rhythms, and melodies, enough so that most of us can guess whether a speaker is utter-ing Japanese or German or French speech even if we do not understand a word of any of these languages. The amazing fact is that newborn infants can do almost as well. Babies’ responsiveness can be measured by an ingenious method that takes advantage of the fact that, while newborns can do very few things voluntarily, one of their earliest talents—and pleasures—is sucking at a nipple. In one study, a nonnutritive nipple (or “pacifier”) was connected to a recording device such that every time the baby sucked, a bit of French speech was heard coming from a nearby loudspeaker. The 4-day-old French babies rapidly discovered that they had the power to elicit this speech just by sucking, and they sucked faster and faster to hear more of it. After a few minutes, how-ever, they apparently got bored, and therefore the sucking rate decreased. Now the experimenter switched the speech com-ing from the microphone from French to English. Did these neonates notice? The answer is yes. When the switch was made, their interest was reawakened, and they began sucking faster and faster again (they dishabituated). To perfect the experimental proof, the same recordings were flown to the United States, and the experiment was repeated with 4-day-old American babies, with the same result. American newborns also can and do discriminate between English and French speech. Indeed, by 2 months of age, not only do infants make these discriminations, but now they become linguisti-cally patriotic and listen longer when their own native language is being spoken (Nazzi, Bertoncini, & Mehler, 1998; see also Figure 10.23). 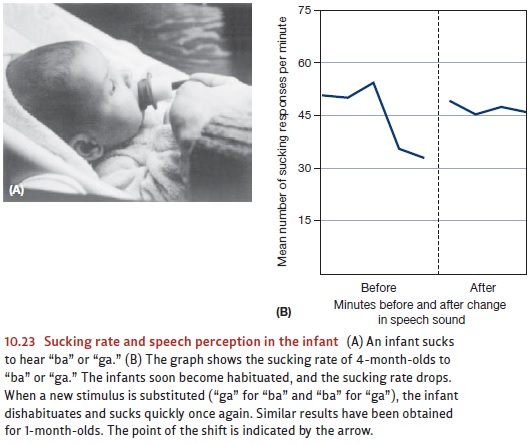 What is it about the native language that is attracting these infants’ attention at these earliest ages? It cannot be the meanings of words, because they as yet do not know any. Evidently the first feature that babies are picking up about their native tongue has to do with the characteristic rhythms of speech in that language (Darwin, 1877; Endress, Nespor, & Mehler, 2009; J. L. Morgan, 1996).

By the age of 1 or 2 months, before they can even sit up unaided, infants  also  become  sensitive  to  distinctions  between  phonemes (Eimas,  Siqueland,  Jusczyk,  and  Vigorito,  1971).  At  first,  infants respond to just about all sound distinctions made in any language, and so Japanese babies can detect the distinction between la  versus ra  as easily as American babies, despite the fact that this contrast is not readily discerned by adult Japanese speakers. However, these per- ceptual abilities erode if  they are not exercised, and so infants lose the ability to make distinctions that are not used in their language community.  Thus,  Japanese  infants  gradually  stop  distinguishing between la and ra. In the same way, American infants stop distinguishing between two different k sounds that are perceptually distinct to Arabic speakers. By the age of 12 months, just as true speech begins, sensitivity to foreign contrasts has diminished sig-nificantly, as the baby recalibrates to listen specifically for the particulars of the lan-guage to which she is being exposed (Werker, 1995; Figure 10.24). 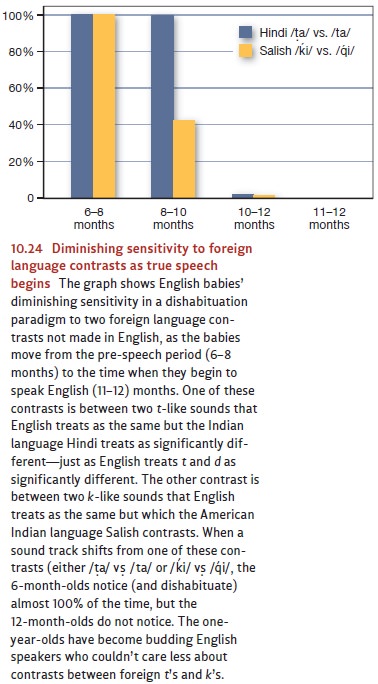 Infants must also find the boundaries between words. Often it is a challenge to do so, as we see from errors that children sometimes make along the way. English-speaking toddlers often reach their arms up to their mothers and fathers, plaintively crying out, “Ca-ree-oo.” This is, apparently, an infant pronunciation of carry you, but we know from other evidence that the children are not mixed up as to the words you and me, nor do they have an urge to lift and transport their parent. Where, then, does this odd usage come from? The children have repeatedly heard their caregivers ask them, “Do you want me to carry you?” and they apparently perceived this utterance to end in a single three-syllable word that is pronounced carreeoo—and means Carry me!

These kinds of errors often persist unnoticed for years. For instance, one 7-year-old, carefully writing her first story about a teacher, spelled out Class be smissed!—showing that she had falsely thought there was a word boundary within the word dismissed (L Gleitman, H. Gleitman, & Shipley, 1972). These word-segmentation problems come about because, as we noted earlier, spoken morphemes are not uttered with silent gaps between them, unlike the case for writing, where gaps (white spaces) demarcate the words. The right question, then, is not, How come learners make some mistakes in find-ing word boundaries? but rather, How come they get these right most of the time? The answer appears to be that infants mentally register which syllables occur right next to each other with unusual frequency. For instance, the syllables rab and it often occur next to each other; this is because together they form the frequent word rabbit. But stub fol-lowed by it is much rarer, because there does not happen to be a word in English pro-nounced stubbit. Beginning well before infants understand any meaningful words at all, they are sensitive to these frequencies of co-occurrence. This process has been demon-strated experimentally with artificial syllable sequences. Infants heard a 2-minute tape recording in which syllables were spoken in a monotonous tone, with no pauses in between the syllables. But there was a pattern. The experimenters had decided in advance to designate the sequence “pabiku” as a word. Therefore, they arranged the sequences so that if the infant heard “pabi,” then “ku” was sure to follow (just as, in ordinary circum-stances, hearing “rab” is a good predictor that one is about to hear “it”). For other sylla-bles and syllable pairs, there was no invariant sequencing. Astonishingly, the babies detected these patterns and their frequencies. In a subsequent test, they showed no evi-dence of surprise if they heard the string “pabikupabikupabiku.” From the babies’ point of view, this simply repeated a pattern they already knew. However, the babies did show surprise if they were presented with the string “tudarotudarotudaro.” This was not a pat-tern they had heard before, although they had heard each of its syllables many times. Thus, the babies had learned the vocabulary of this made-up language. They had detected the statistical pattern of which syllables followed which, despite their rather brief, entirely passive exposure to these sounds and despite the absence of any supporting cues such as pauses or meanings that go with the sounds (Aslin, Saffran, & Newport, 1998; G. F. Marcus, Vijayan, Bandi Rao, & Vishton, 1999; Saffran, 2003; Xu & Garcia, 2008).