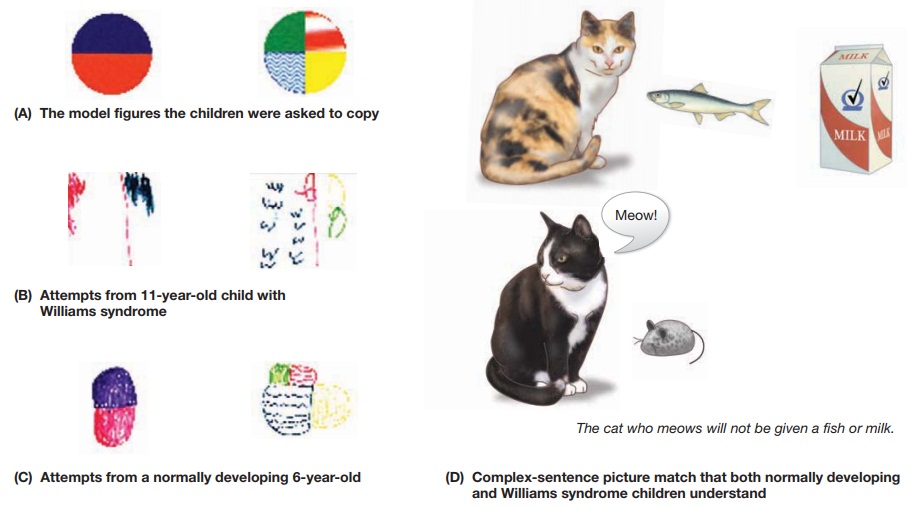 As we just saw, language learning can proceed in the face of severe environmental dep-rivations so long as the learner has a normal human brain.

As we just saw, language learning can proceed in the face of severe environmental dep-rivations so long as the learner has a normal human brain. But what happens if the nature of the learners themselves is changed? Since language learning and use are determined by brain function, changes in the brain should have strong effects (Fowler, Gelman, & Gleitman, 1994; Lenneberg, 1967; G. F. Marcus, 2004; Newport, 1990).

There are many indications that the nature and state of the brain do have massive consequences for language functioning. We discussed the evidence of aphasia, in which damage in the brain’s left hemisphere can have devastating andhighly specific impacts on speech and comprehension. Further evidence comes from individuals with an apparently inherited syndrome known as Specific LanguageImpairment (SLI). Individuals with this syndrome are generally slow to learn lan-guage and throughout their lives have difficulty in understanding and producing many sentences. Yet these individuals perform normally on most other measures, including measurements of intelligence (Gopnik & Crago, 1990; Pinker, 1994; van Der Lely & Christian, 2000).

We can also find cases with the reverse pattern: preservation of language along with disruption of other mental capacities. Individuals with this pattern (called Williams syndrome) have mild to moderate retardation (with average IQ scores of 65) and severe disruption of spatial capacites, but they are still capable of quite fluent and articulate language (Figure 10.34; Bellugi, Marks, Bihrle, & Sabo, 1991; Landau & Zukowski, 2002; Musolino, Chunyo, & Landau, in press; Pinker, 1995). 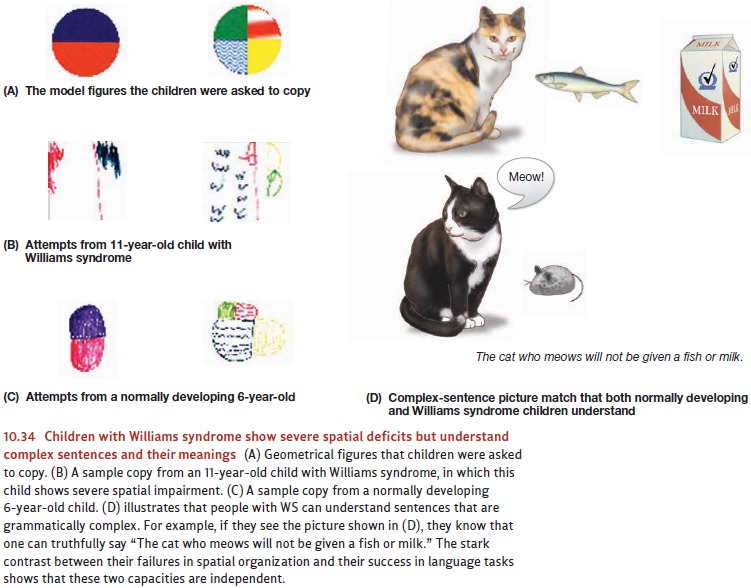 Overall, we see from these unusual cases of brain organization (or injury) that language and general intelligence are partly distinct. Some of these conditions target language particularly, leaving much of the rest of cognition largely intact. Under other conditions, language knowledge and use function very well indeed, but in the presence of diminished cognitive capacities.