How Can We Study Language and Thought?

Although, as we have just seen, the Inuit snow case does not really hold water (perhaps we should say it does not hold ice), there are many other aspects in which language dis-tinctions can be and have been more profitably studied.

How Can We Study Language and Thought?

Although, as we have just seen, the Inuit snow case does not really hold water (perhaps we should say it does not hold ice), there are many other aspects in which language dis-tinctions can be and have been more profitably studied.

Some languages have a rich and subtle vocabulary of color words (e.g., English puce, mauve, tea, crimson), while other languages have only a few color terms (Berlin & Kay,1969). As an extreme case, the Dani people of New Guinea have only two terms for color, one meaning (roughly) dark/cool and the other meaning light/warm. Still, there are strong simi-larities in how speakers of English and speakers of Dani perceive color, with the named color categories in both cultures based on “favored percepts selected from restricted regions of color space,” and with striking agreement, across the cultures, in which are “best examples” of each color (Heider, 1972; Regier, Kay, & Cook, 2005). Within these limits, however, recent evidence suggests that the different color labeling practices adopted in different languages can influence the ways that nonlinguistic categorization is carried out by the brain, with left-hemisphere advantages observed primarily in tasks that require the participant to discriminate between categories that are differently labeled in his or her language. Particularly interesting is recent evidence that these left-hemisphere advantages develop in childhood, in conjunction with the acquisition of the language’s particular color terminology (Kay & Regier, 2006).

THE LANGUAGE OF SPATIAL POSITION AND DIRECTION

Another area in which we can examine the interaction of language and thought is in descriptions of space, because there are considerable differences in how various languages describe spatial position. For instance, English speakers would say that thefruit is in the bowl and also that the DVD is in the laptop, using the same preposition (in)in both cases. Korean speakers would use two different words in these cases, with one word conveying the idea of fitting loosely (as the fruit is in the bowl) and the other describing things that fit tightly (the DVD is in the laptop) (Figure 10.39; Choi & Bowerman, 1991). As another example, English distinguishes in the word most often used for vertical contact (on) and vertical noncontact (above), while both Japanese and Korean favor a single word to convey both on and above.

Despite these linguistic differences, Japanese, Korean, and English speakers all seem to think about spatial position in very similar ways. In one study, participants were shown pictures of objects located at various positions with respect to a reference object. A short time later, they were shown another picture and asked if it depicted the same scene or a slightly different one. In some cases, this new picture was altered slightly, but it preserved the relationship (of on or above) shown in the original picture. (The first 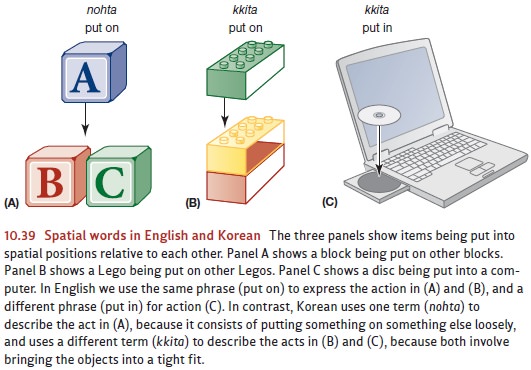 picture, for example, might have shown a cup on a table; the second, a cup still on a table but shifted slightly to the right.) In other cases, the new picture depicted a change in this relationship (with the original picture showing the cup on the table and the test picture showing the cup above the table). If English sensitizes us to the contrast between on and above, then English speakers should detect alterations that change these relationships more easily than Koreans or Japanese do. But the data show no such effect, and the memory performance of all groups was the same (Munnich, Landau, & Dosher, 2001; also see Hayward & Tarr, 1995; Xu, 2002).

Summarizing here, differences in the language of location and space are large and clear cut. Indeed speakers of one language express puzzlement at how other linguistic users express some of these ideas, and have trouble learning the differentiating aspects of the two languages (Figure 10.40). Yet we know that language itself cannot be what is creating these categories, because infants are sensitive to these distinctions in the prelinguistic period. For instance, 5-month-olds in habituation experiments show that they already distinguish between tightly fitting and loosely fitting (Hespos & Spelke, 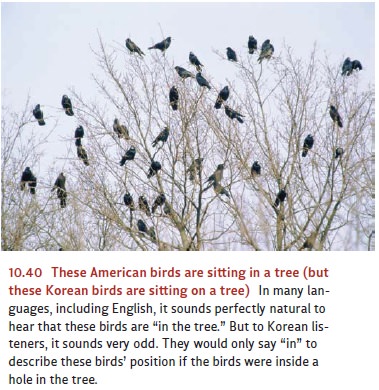 2004). Nor can it be said that speakers become less sensitive over time to these distinc-tions. If, for instance, a diminished sensitivity to “on” versus “above” were a result of learning Japanese rather than English, we should all be terrified of flying with Japan Airlines (Norbury, Waxman, & Song, 2008).

As another example, speakers of Tzeltal (a Mayan language) who live in Tenejapa, a rural region of Chiapas, Mexico, have no terms for “to the left of ” or “to the right of,” expressions that are obviously available (and often used) in, for example, English, Dutch, Japanese, and even the Spanish-speaking areas of Chiapas (Figure 10.41). Rather, these Tenejapens speak of things being roughly to the east, to the south, and so on. Of course, English speakers too can sensibly use terms like east, but in fact we rarely use these terms to refer to very nearby things. For instance, Hand me the spoon that’s tothe east of your teacup sounds quite unnatural. 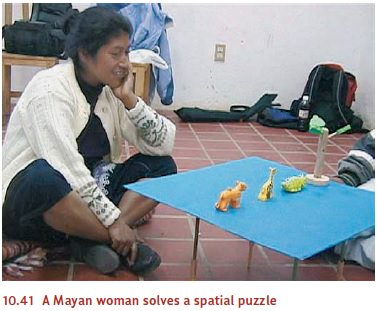 This terminological distinction could be crucial, because words like east and left func-tion differently: If you turn 180 degrees, what was previously to your east will still be to your east, but what was previously to your left will now be to your right. This is because east and west have to do with position relative to an outside landmark (where the sunrises), whereas left and right have to do with position relative to one’s own body. This suggests the possibility that spatial reasoning might be different in languages that favor the left-right distinction versus those that favor the east-west distinction.

Do speakers of Tzeltal actually think about space differently than English or Dutch speakers do? In one study, speakers of these different languages were asked to memorize the positions of toy animals lined up on a table (Figure 10.42A). Then the animals were removed, and the participants were rotated 180degrees to a new table (Figure 10.42B). The participants were handed the animals and asked to set them up on this new table so that it is the same as before. Notice that there are two ways to do so (Figure 10.42C and D): The animals can be set up so that they are still going to the right or still going to thewest. And, in fact, the terminology used by the subjects in their native tongue predicted the way they solved this problem (Levinson, 2003; Pederson et al., 1998). 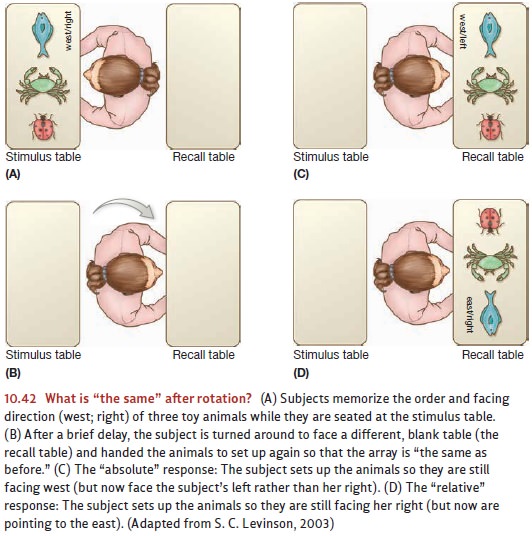 This experiment makes a strong initial case that ways of thinking (here, thinking about space) may be directly influenced by the words in use in a specific language. But other investigators argue that these results reflect only the specific conditions of test-ing. To evaluate this suggestion, these later investigators created test conditions for English speakers like those under which the Tzeltal group had been studied, for example, providing strong landmarks visible to the east and west of the testing area. Under these conditions, American college students behaved much as the Tzeltal speakers (who had been tested outdoors in their own community) had behaved in this same task (Li & Gleitman, 2002).

More recent evidence shows that the differences among speakers of different lan-guages on rotation tasks are mainly in their understanding of what they think the experimenter wants them to do. It is no surprise that when the task is presented ambiguously (“make it the same”) that Tzeltal speakers guess that you are referring to east-west-the-same and English speakers guess that you are referring to left-right-the-same. After all, that is the way their cultures most frequently talk about locations and directions. As we saw in our earlier discussion of language comprehension the frequency of words and constructions has a strong effect on our immediate interpre-tations of language that we hear (or read), especially under ambiguous circum-stances. We are led down particular garden paths because these are the most probable ones, in our prior experience. But a further question—sometimes called the “strong form” of the Whorfian hypothesis—is whether our thought has become rigidified so that it is hard or impossible to think in any other way. To find out, inves-tigators now asked what happens when the task requirements in the rotation exper-iments are made unambiguous. The answer is that the differences between Tzeltal and English performance vanish: In sum, if Tzeltal speakers know you want them to do a rotation task, or solve a maze, taking left-right perspective rather than east-west perspective, it turns out that they are as competent as English speakers in doing so (Li, Abarbinell, Gleitman, & Papafragou, in press). Several recent experiments have shown, similarly, that linguistic effects on how one thinks are “of the moment” and are easily reversible by momentary situational context, rather than being lifelong effects of language particulars on how one can think at all (Boroditsky, 2001; January & Kako, 2007).