We have seen that language learning is deeply rooted in the nature and development of human brains.

We have seen that language learning is deeply rooted in the nature and development of human brains. Does this imply that creatures with different sorts of brains will be unable to learn language? As we will see, the evidence indicates that our nearest animal relatives cannot come close to attaining human language, even with the best of good will and the most strenuous educational procedures. At the same time, though, there is considerable overlap between our biological endowments and those of other primates. For this reason, we should not be too surprised if some rudiments of language can be made to grow in them. If so, they may offer insight into the origins of our own commu-nicative organization.

Recent studies do reveal interesting commonalities between human and animal com-munication. For example, vervet monkeys have separate calls of alarm, depending on the predator—leopard, eagle, or snake, which are responded to differentially by other vervets (Cheney & Seyfarth, 1990; also see Ghazanfar & Hauser, 1999; S. Green, 1975). Related communicative uses have been demonstrated for dolphin whistles as well (Reiss, McCowan, & Marino, 1997; Tyack, 2000). However, animals’ production of sounds is very restricted, with a vocabulary size of only a few dozen different signals, compared to the tens of thousands of words in an adult human’s repertoire. And crucially for the com-parison with humans, the animal signals do not combine together to enlarge the num-ber of messages that can be conveyed. Humans link their words in ever new and structured ways so as to express new thoughts that listeners easily comprehend. This cre-ative kind of communication appears to be closed even to our closest primate cousins. For instance, monkeys have no way to utter differentially “Beware! Monkeys-eating-snakes” versus “Beware!Snakes-eating-monkeys.”

On the other hand, animals’ perception of sounds (and comprehension of the mean-ing associated with the sounds) is much more impressive than their restricted speaking (or signing). Wild monkeys and apes live in groups that number into the hundreds, rec-ognize all of these individuals’ calls, and learn the alarm calls of birds, impala, and other animals. In captivity they learn to recognize the meaning of all sorts of sounds, like the voices of different caretakers or the beep of a card swipe that signals feeding time. And while monkeys and apes rarely produce combinations of calls to convey new messages, they hear and interpret call combinations all of the time, whenever two of their group-mates are interacting with each other. For instance, in one experiment, baboons were played a threatening grunt from Hannah, a low-ranking female in their group, paired with a submissive scream from Sylvia, a high-ranking female. This seemed to violate the existing dominance hierarchy and the listeners responded strongly as if startled by the oddity. On the other hand, they showed little or no response when they heard the threat-ening grunt from Sylvia and the submissive scream from Hannah (Bergman, Beehner, Cheney, & Seyfarth, 2003). Thus, the baboons seem insensitive to the syntax of other baboon utterances, and this limits their communicative prowess. But, even so, they do seem sensitive to the context of the utterances, and, in particular, who is saying what to whom. This context-sensitivity enormously enlarges the number of socially relevant mes-sages that can be conveyed, making baboon communication richly informative despite its limits of form and structure (Cheney & Seyfarth, 2007).

Is it possible that with just the right training this limited repertoire of production can be overcome and animals can master communication skills that truly deserve the term language? Many researchers have pursued these possibilities, trying to teach language-like systems to animals in the laboratory, using a variety of communication media in which hand gestures, bits of colored plastic, or symbols on a computer screen stand for words. Researchers have also tried to train a range of species, including chimpanzees, dolphins, gorillas, dogs, parrots, and pygmy chimps (bonobos). These animals have made impressive progress—increasing their gesture “vocabulary” (to roughly 500 “words” in the case of the bonobo Kanzi and close to 300 for the border collie Rico; Figure 10.38; Kaminski, Call, & Fischer, 2004). 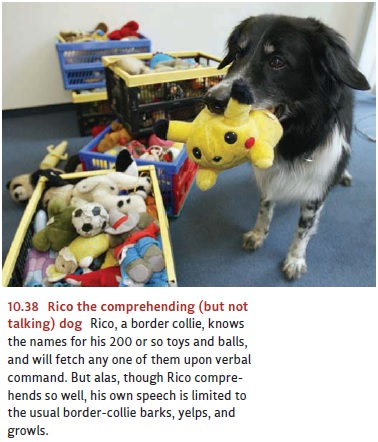 However, the results of these training efforts have all been rather limited and so utterly fail to support the extravagant descriptions of these “linguistic creatures” in the popular media. Even after exten-sive training, their utterances are rarely more than two words long; when longer, they tend to involve disorganized repetitions (Giveorange me give eat orange me eat orange give me orange give me you). Their utterances aretypically imitations or expansions of the utterance they just heard from their human trainers, and their mastery of syntax is sharply limited. For example, no nonhuman has mastered the distinction between plural and singular nouns, or verb tense, or any means of marking words for their grammatical class, while every human child of nor-mal mentality does so by the age of 3 or 4, without explicit training. (For reviews, see Kako, 1999; Petitto, 1988; Pinker, 1994; Tomasello, 1994, 2003; for contrary views see also Herman & Uyeyama, 1999; Pepperberg, 1999; Savage-Rumbaugh & Fields, 2000.)

The conclusion, then, is that animals do indeed have rich communicative systems of their own, but these systems are strikingly, qualitatively, different from human language. Nonetheless, we can learn from animals in the wild—particularly monkeys and apes— something about the ancestral communicative system from which language may have emerged. If modern primates are any guide, our prelinguistic ancestors had some calls that functioned like words (alarm calls, for example), and were exceptionally skilled at recognizing others’ voices, distinguishing different call types (screams, threats, and oth-ers) and extracting a huge number of different messages from a limited vocabulary com-bined with their interpretation of the situation at hand. Before language, there was a rich set of meanings and concepts, all embedded in the animals’ socially grounded knowledge of each other.