At the next level of the linguistic hierarchy (see Figure 10.2), fixed sequences of phonemes and syllables are joined together into morphemes. The morphemes are the smallest language units that carry bits of meaning. Examples of morphemes are talk, tree, and the -edmorpheme that marks the past tense. Some words consist of a singlemorpheme, such as and, man, and bake, while others contain more than one, for exam-ple, waterfall, talked, and downstairs. 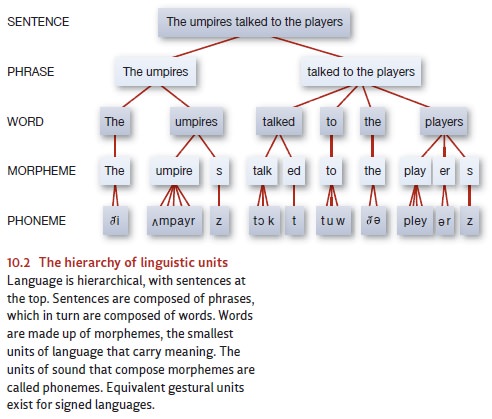 Morphemes such as bake and man that carry the main burden of meaning are called content morphemes. The morphemes that not only add details to the meaning (suchas plurality or tense) but also serve various grammatical purposes (such as the suffixes -edand -ness and the connecting words and and which) are calledfunction morphemes.This distinction of morpheme type, existing in all languages, is reflected in the sound characteristics of the language, so that content and function morphemes are pro-nounced somewhat differently, with the function words more likely to be shorter and unstressed (Shi, Morgan, & Allopenna, 1998). The intermixing of function and content morphemes in sentences is an important factor giving speech its rhythmic cadence of strong and weak beats (Nespor, Peña, & Mehler, 2003). Some function morphemes cannot stand alone and must be joined with others to make up a complex word. We mentioned -ed; other examples are -er (meaning “one who”) and -s (meaning “more than one”). When these are joined with the morpheme bake (meaning “to cook by slow heating”) into the complex word bakers (bake !er!s), the meaning becomes correspondingly complex (“ones who cook by slow heating”). And once again (just as with phonemes) there are constraints on where in the sequence each morpheme occurs. We could not, intelligibly, say erbakes or bakeser instead of bakers.

Recordings of activity in the brain reveal that content and function morphemes are processed in different ways during normal language activities (C. M. Brown, Hagoort, ter Keurs, 1999). Relatedly, in brain injury a person’s ability to utter or process function morphemes may be compromised while the content words remain intact (the reverse condition also occurs, though more rarely), confirming the fact that these two types of words rely on partly different brain circuits and are sited differently in the brain.