To speak, we force a column of air up from the lungs and out through the mouth, while simultaneously moving the various parts of the vocal apparatus from one position to another.

To speak, we force a column of air up from the lungs and out through the mouth, while simultaneously moving the various parts of the vocal apparatus from one position to another (Figure 10.3). Each of these movements shapes the column of moving air and thus changes the sound produced. The human speech apparatus can emit hundreds of different speech sounds clearly and reliably, but each language makes systematic use of 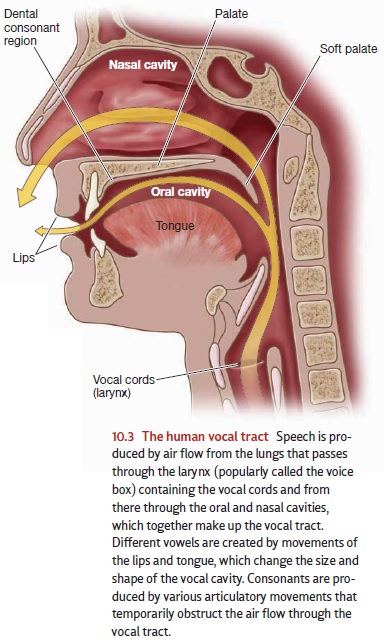 only a small number of these physical possibilities. For example, consider the English word bus, which can be pronounced with more or less of a hiss in the s. This sound dif- ference, though audible, is irrelevant to the English-language listener, who interprets what was heard to mean “a large vehicle” in either case. But some sound distinctions do matter, for they signal differences in meaning. Thus, neither butt nor fuss will be taken to mean “a large vehi-cle.” This suggests that the distinctions among s, f, and t sounds are rel-evant to the perception of English, while the difference in hiss duration is not. The sound categories that matter in a language are called its phonemes. English uses about 40 different phonemes.* Other lan-guages select their own sets. For instance, German uses certain guttural sounds that are never heard in English, and French uses some vowels that are different from the English ones, making trouble for Americans who are trying to order le veau or le boeuf in Parisian restaurants (Ladefoged & Maddieson, 1996; Poeppel & Hackl, 2007).

Not every phoneme sequence occurs in every language. Sometimes these gaps are accidental. For instance, it just so happens that there is no English word pilk. But other gaps are systematic effects of the lan-guage design. As an illustration, could a new breakfast food be called Pritos? How about Glitos or Tlitos? Each of these would be a new word in English, and all can be pronounced, but one seems wrong: Tlitos. English speakers sense that English words never start with tl, even though this phoneme sequence is perfectly acceptable in the middle of a word (as in motley or battling). So the new breakfast food will be marketed as tasty, crunchy Pritos or Glitos. Either of these two names will do, but Tlitos is out of the question. The restriction againsttlbeginnings is not a restriction onwhat human tongues and ears can do. For instance, one Northwest Indian language is named Tlingit, obviously by people who are perfectly willing to have words begin with tl. This shows that the restriction is a fact about English specifically. Few of us are con-scious of this pattern, but we have learned it and similar patterns exceedingly well, and we honor them in our actual language use.

Languages differ from one another in several other ways at the level of sound. There are marked differences in the rhythm in which the successive syllables occur, and 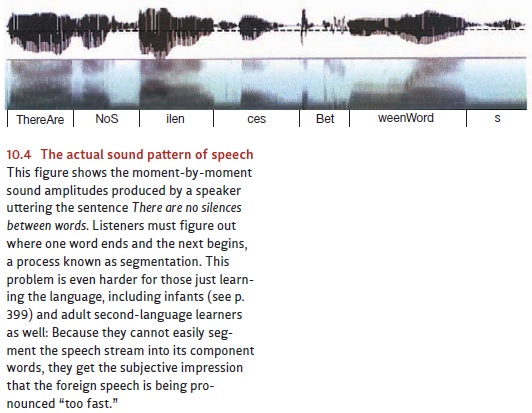 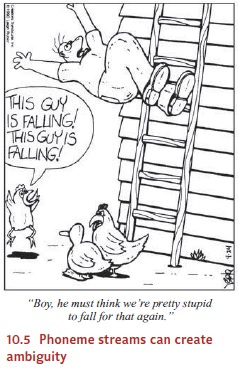 differences as well in the use and patterning of stress (or accent) and tone (or pitch). For instance, in languages such as Mandarin Chinese or Igbo, two words that consist of the same phoneme sequence, but that differ in tone, can mean entirely different things. Languages also differ in how the phonemes can occur together within syllables. Some languages, such as Hawaiian and Japanese, regularly alternate a single consonant with a single vowel. Thus, we can recognize words like Toyota and origami as “sounding Japanese” when they come into common English usage. In contrast, syllables with two or three consonants at their beginning and end are common in English; for example, flasks or strengths.

Speech can be understood at rates of up to about 250 words per minute. The normal rate is closer to 180 words per minute, which converts to about 15 phonemes per sec-ond. These phonemes are usually fired off in a continuous stream, without gaps or silences in between the words (Figure 10.4). This is true for phonemes within a single word and also for words within a phrase, so that sometimes it is hard to know whether one is hearing “that great abbey” versus “that gray tabby” or “The sky is falling” versus “This guy is falling” (Levelt, 1989; Liberman, Cooper, Shankweiler, & Studdert-Kennedy, 1967; see Figure 10.5).