Language without a Model

What if children of normal mentality were raised in a loving and supportive environ-ment but not exposed to either speech or signed language?

Language without a Model

What if children of normal mentality were raised in a loving and supportive environ-ment but not exposed to either speech or signed language? Researchers found six children who were in exactly this sort of situation (Feldman, Goldin-Meadow, & Gleitman, 1978; Goldin-Meadow, 2000; Goldin-Meadow & Feldman, 1977). These children were deaf, so they were unable to learn spoken language. Their parents were hearing and did not know ASL. They had decided not to allow their children to learn a gestural language, because they shared the belief (held by some educators) that deaf children should focus their efforts on learning spoken language through special train-ing in lip-reading and vocalization. This training often proceeds slowly and has limited success, so for some time these children did not have any usable access to spoken English. Not yet able to read lips, unable to hear, and without exposure to a gestural language, these children were essentially without any linguistic stimulation.

These language-isolated children soon did something remarkable: They invented a language of their own. For a start, the children invented a sizable number of gestures that were easily understood by others. For example, they would flutter their fingers in a downward motion to express snow, twist their fingers to express a twist-top bottle, 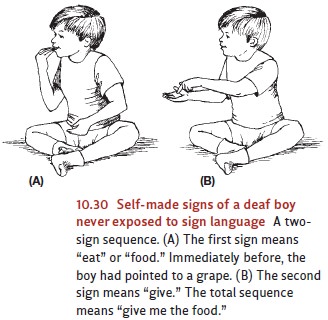 and so on (Figure 10.30; Goldin-Meadow, 2003). This spontaneously devel-oping communication system showed many parallels to ordinary language learning. The children began to gesture one sign at a time at approximately the same age that hearing children begin to speak one word at a time, and they progressed to more complex sentences in the next year or so. In these basic sentences, the deaf children placed the individual gestures in a fixed serial order, according to semantic role—again, just as hearing children do.

More recent evidence has shown just how far deaf children can go in inventing a language if they are placed into a social environment that favors their communicating with each other. In Nicaragua until the early 1980s, (A) deaf children from rural areas were widely scattered and usually knew no others who were deaf. Based on the findings just mentioned, it was not surprising to discover that all these deaf individuals developed homemade gestural systems (“home signs”) to communicate with the hearing people around them, each system varying from the others in an idiosyncratic way. But then a school was created just for such deaf chil-dren in Nicaragua, and since then they have been bused daily from all over the coun-tryside to attend it. Just as in the American and many European cases, the school authorities have tried to teach these children to lip-read and vocalize. But on the bus and in the lunchroom, and literally behind the teachers’ backs, these children (age 4 to 14 in the initial group) began to gesture to each other. Bit by bit their idiosyncratic home signs converged on conventions that they all used, and the system grew more and more elaborate (Figure 10.31; Senghas, Román, & Mavillapalli, 2006). The emerging gestural language of this school has now been observed over three genera-tions of youngsters, as new 4-year-olds arrive at the school every year. These new members not only learn the system but also elaborate and improve on it, with the effect that in the space of 30 years a language system of considerable complexity and semantic sophistication has been invented and put to communicative use by these children (Kegl, Senghas, & Coppola, 1999; Senghas, Kita, and Özyürek, 2004). Perhaps it is true that Rome was not built in a day, but for all we know, maybe Latin was! In sum, if children are denied access to a human language, they go to the trou-ble to invent one for themselves. 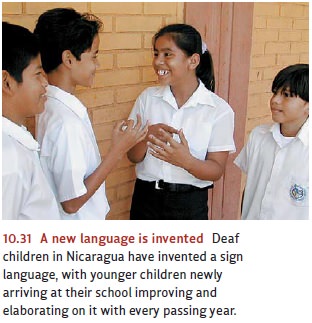