The Growth of Word Meaning

We have just seen something of how the child discovers the basic word-like units of language.

The Growth of Word Meaning

We have just seen something of how the child discovers the basic word-like units of lan-guage. Children begin to understand a few of these words late in the first year of life, and start to talk themselves shortly thereafter, uttering such simple words as duck and spoon and bye-bye in appropriate contexts. How did they learn these meanings? The obvious answer appears to be that, once they have noticed a recurrent sound pattern—for exam-ple, the pattern r-a-b-i-t—they now look around the world to see which object or event is characteristically in view when that pattern of sound is heard. Aha! Rabbit! (Locke, 1690; Quine, 1960; Markman, 1994). But is such a procedure of matching up words to their extralinguistic circumstances really as easy as that? There are many reasons to suppose that the child’s path to word learning is strewn with problems (Figure 10.25). One major problem is that the child’s environment is complex and cluttered, so how can the baby decide what the caregiver’s utterance really refers to? Even if the baby correctly identifies, say, a rabbit in view when the adult is saying “rabbit,” what aspect of rabbit does the adult really have in mind? After all, whenever one sees a rabbit, one sees its ear, one sees something furry, and one necessarily sees an animal too. To which of these ideas is the adult’s word really referring (Chomsky, 1959; L. R. Gleitman, 1990; Quine, 1960)? By repeated observations of words in different situations one would expect children to get much of this con-fusion of words and things all sorted out (Locke, 1690; Smith & Yu, 2008; Xu & Tenenbaum, 2007). For instance, if the child is lucky, she may one day hear her father say “rabbit” while she is viewing an earless rabbit or a rabbit whose ears are hidden among the cabbages. This might get the word rabbit sorted out from the word ear. But disentangling all these things, parts, properties, actions, and so forth within the visible world certainly seems to pose a formidable problem. Yet in actual fact children are impressively accurate in their discovery of word meaning and the errors that do occur are short-lived. By the time the child has a 100-word vocabulary, he is almost always correct in using words to refer to things and events in much the way that adults do. A number of factors intersect to solve this task. 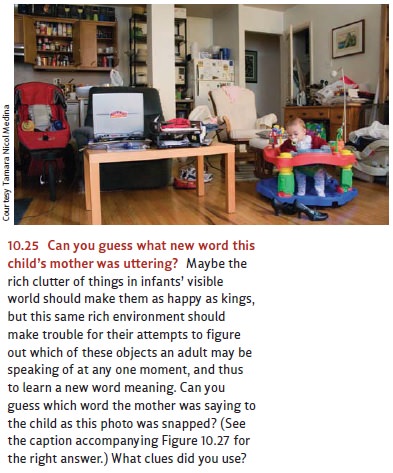 Understanding the young learner’s success in acquiring the word goes back to issues of sociality, the infant’s focus on the adult’s attentional state and communicative intent. We can see these effects in experiments where toddlers are taught new words (Figure 10.26; Baldwin, 1991). The child is shown a fascinating new toy and allowed to explore and play with it, whereupon the mother says excitedly, That’s a blicket! Wow, 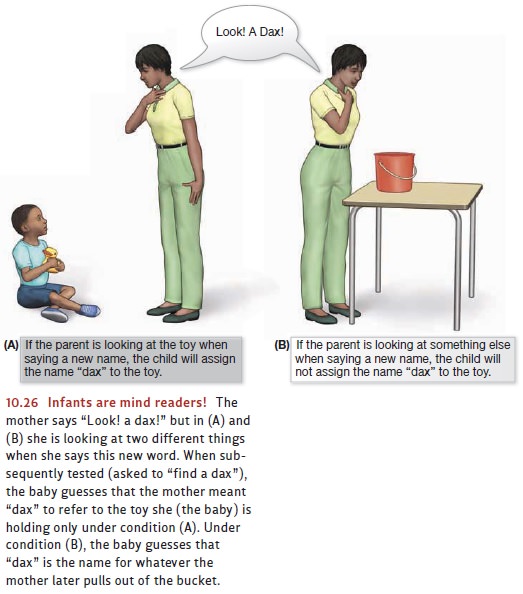 a blicket! Will the child by a process of automatic association now thinkthat the name for this new toy is blicket? In fact, rather than jumping to this conclusion right away, most children appear to seek evi-dence that the mother was attending to the toy too. Upon hearing the mother’s voice, they immediately glance into her eyes (just as an adult would) to see if the mother herself was looking at the toy in the child’s hands (and thus, probably, referring to it and not to something else when she said blicket). If the mother was indeed looking at this toy, then, when tested later on, the children showed that they had learned the blicket label for the new toy. But if the mother had been looking elsewhere—say, into a bucket whose contents were not visible to the child—the children did not assign this new word as the toy’s name. Rather they thought it was the name for some-thing, so far unseen, inside the bucket. In short, even children under 2 years of age use social context, in this case the caregiver ’s attentional stance toward an event, as a critical guide in language learning (Figure 10.27). They do not form word-to-meaning associations if the social context of lan-guage use does not guide them to do so (Baldwin, 1991; see also P. Bloom, 2002; Frank, Goodman, & Tenenbaum, 2009; Medina, Trueswell, Snedeker, & Gleitman, 2008; Nappa, Wessel, McEldoon, Gleitman, & Trueswell, 2009).

Word learning is heavily influenced by the ways children think about and categorize objects and events in the world (Gordon, 2004; Rosch, 1978). This is reflected, for example, in the fact that young children acquire the basic-level words for whole objects (dog) before learning their parts (ear), superordinates (animal), or subordi-nates (Chihuahua). One might think this happens just because the basic-level wordsare used most frequently to children. But differential frequency does not seem to be the whole explanation. In some homes, the word Spot or Rex (specific names) is used much more often than dog (a basic-level term) for obvious reasons. And it is true that in this case the young learner will often come to use the word Spot before he learns to utter dog. But he first learns it as a basic-level term all the same. This is shown by the fact that he will utter Spot to refer to the neighbor’s dog as well as his own. Similarly— and sometimes embarrassingly—the father is by far the most frequent man that many a toddler has seen and so she may point and say Daddy! in response to any man she sees in the street or the supermarket. Such overgeneralizations convert the interpretation from a specific name to the basic level of categorization, evidently, the most natural level for carving up experience (Mervis & Crisafi, 1978; Shipley, Kuhn, & Madden, 1983).

Children also have other biases in how they think about and use new words. In some studies, for example, experimenters have taught children nonsense words— pointing to some novel object and saying, “That is a biff.” To what new objects will the child apply this new label? She generally will not use biff to describe other objects that happen to be made of the same material, size, or color. Instead, she uses biff to describe objects having the same shape as the entire original (Landau, Smith, & Jones, 1988; Soja, Carey, & Spelke, 1991). Apparently, then, learners naturally under-stand this new term as a label for the entire object (Markman & Hutchinson, 1984). And indeed investigation of infants’ early vocabularies show that they learn many words for whole objects (such as table) before they acquire words for these objects’ sizes (big), parts (leg), or material composition (wood) even though bigness, wood-enness and table-leg are in principle just as visible as the whole table when the word table is uttered.

The very first examples of language use (at roughly the age of 10 months) seem to involve direct labeling of objects that the child is looking at, without the inclination or ability to talk about absent things and events. But even at the tender age of 12 to 16 months, infants begin to search for an absent object whose name is mentioned (Huttenlocher, 1974). The ability to use words in the absence of their referents is firmly in place at about 18 months (Tomasello, Strosberg, & Akhtar, 1996). One demonstra-tion is from investigators who followed 24-month-old children’s gaze when they heard questions such as, “Where’s the doggie?” In one condition of the experiment, the child was actually looking at a picture of a dog on a screen when she heard the question. In the second condition, the child was looking at another picture (say, of a car) to her right, but (because there were opportunities to look from side to side in advance) the child knew that the dog picture could be viewed if she shifted her eyes leftward. In the third condition, there was no dog picture—rather, a picture of a car to the right and, say, one of a shoe to the left. If the child was already looking at the picture of a dog (the first condition), naturally enough, her eyes did not shift in response to this question. In the second condition, she rapidly shifted her gaze toward the dog picture. But the big question is what the child would do in the total absence of dogs or dog pictures. If she really can think about absent objects, she ought to go right on searching to make sense of the utterance “Where is the doggie?” when a dog is not anywhere in sight. And this is precisely what happened. Apparently even the smallest toddlers can understand language “decontextualized”—that is, divorced from the immediate evidence of the senses (Swingley & Fernald, 2002).

By the second year of life children acquire a remarkably complex new trick: They come to use the structure of the language they are learning as further information guiding their word learning (R . Brown, 1957; Fisher & Gleitman, 2002; L .R .Gleitman, 1990; D. G. Hall et al., 2000; Landau & Gleitman, 1985; Landau & Stecker, 1990; Lidz, Gleitman, & Gleitman, 2003; Fernandes, Marcus, DiNubila, & Vouloumanos, 2006; Papafragou, Cassidy, & Gleitman, 2007). In one study, 3- and 4-year-olds were shown a picture in which a pair of hands was performing a kneading sort of motion with a mass of red confetti-like material that was overflowing a low, striped container (Figure 10.28; R .Brown, 1957). Some of the children were asked, “In this picture, can you show me sebbing?” The children responded by making the same kneading motions with their hands. Other children were asked, “In this picture, can you show me a seb?” In response, the children pointed to the container. Still other children were asked, “Can you show me some seb?” These children pointed to the confetti. The evidence of grammatical word class (for example, seb!ing indicates that seb is a verb) for word meaning (verbs usually describe actions) influenced their understanding of what the new word referred to in the picture. 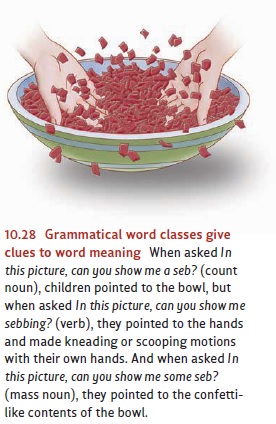 It seems, then, that children’s learning proceeds in two directions at once. On the one hand, they use their growing knowledge of word classes within the language to guide their discovery of what a particular new word means. It is almost as if the child were saying to himself, “Because this new word was just used as a noun, it probably describes a thing.” And similarly, they use their knowledge of individual words to pre-dict how those words can be used: “Because this Woodstock toy is now an instrument for hitting me on the head, I can use it as a verb and tell my friend to ‘Stop Woodstocking me or go home!’” (E. V. Clark, Gelman, & Lane, 1985; Pinker, 1984). Using both kinds of evidence, children efficiently find their way into knowledge of tens of thousands of words and the ways these words can be used in sentences (Bowerman, 1982; L .R . Gleitman, Cassidy, Papafragou, Nappa, & Trueswell, 2005; Golinkoff, Hirsh-Pasek, Cauley, & Gordon, 1987; Lidz, Gleitman, & Gleitman, 2003; Naigles, 1990; Snedeker & Gleitman, 2004).

Psychology Language: The Meanings of Sentences
Psychology Language: How We Understand
How We Learn a Language
The Social Origins of Language Learning
Discovering the Building Blocks of Language
The Growth of Word Meaning
The Progression to Adult Language
Language Learning in Changed Environments
Wild Children
Isolated Children
Language without Sound
Language without a Model
Children Deprived of Access to Some of the Meanings