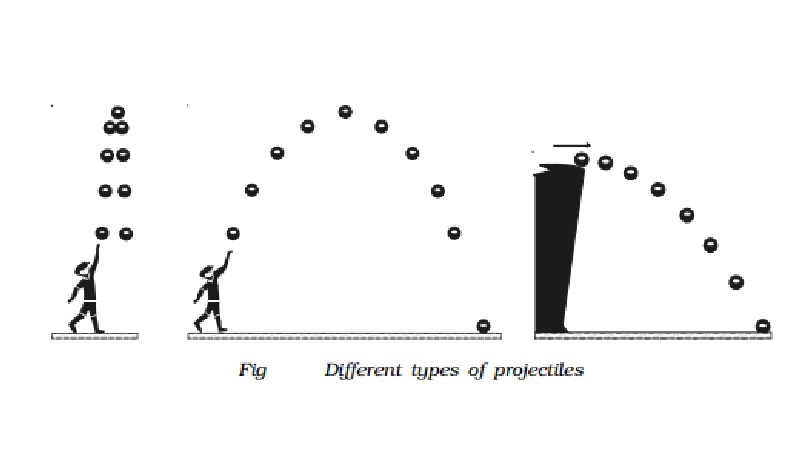 A body thrown with some initial velocity and then allowed to move under the action of gravity alone, is known as a projectile.

A few examples of projectiles are (i) a bomb thrown from an aeroplane (ii) a javelin or a shot-put thrown by an athlete (iii) motion of a ball hit by a cricket bat etc.

The different types of projectiles are shown in Fig.. A body can be projected in two ways:

1.     It can be projected horizontally from a certain height.

2.     It can be thrown from the ground in a direction inclined to it.

A body projected with an initial velocity making an angle with the horizontal direction possess uniform horizontal velocity and variable vertical velocity, due to force of gravity. The object therefore has horizontal and vertical motions simultaneously. The resultant motion would be the vector sum of these two motions and the path following would be curvilinear.

The above discussion can be summarised as in the List

In the study of projectile motion, it is assumed that the air resistance is negligible and the acceleration due to gravity remains constant.

The velocity with which the body is projected is known as velocity of projection.

Range of a projectile is the horizontal distance between the point of projection and the point where the projectile hits the ground.

The path described by the projectile is called the trajectory.

Time of flight is the total time taken by the projectile from the instant of projection till it strikes the ground.