Photosystems I and II and the Light Reactions of Photosynthesis 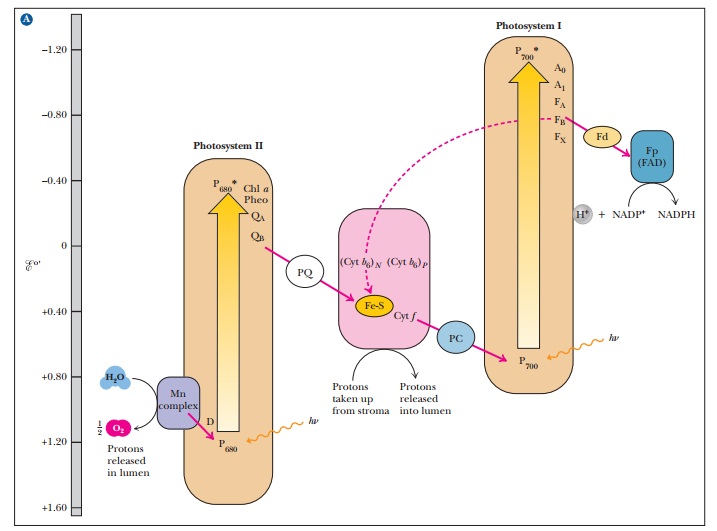 Photosystems I and II and the Light Reactions of Photosynthesis

In the light reactions of photosynthesis, water is converted to oxygen by oxidation and NADP+ is reduced to NADPH. The series of redox reactions is coupled to the phosphorylation of ADP to ATP in a process called photophosphorylation.

In the dark reactions, the ATP and NADPH produced in the light reaction provide the energy and reducing power for the fixation of CO2. The dark reac-tions also constitute a redox process, since the carbon in carbohydrates is in a more reduced state than the highly oxidized carbon in CO2. The light and dark reactions do not take place separately, but they are separated for purposes of discussion only.

This is an endergonic reaction with a positive ∆G° = +220 kJ mol-1 = +52.6 kcal mol-1. The light energy absorbed by the chlorophylls in both photosystems provides the energy that allows this endergonic reaction to take place. A series of electron carriers embedded in the thylakoid membrane link these reactions. The electron carriers have an organization very similar to the carriers in the electron transport chain.

There are two places in the reaction scheme of the two photosystems where the absorption of light supplies energy to make endergonic reactions take place (Figure 22.6). 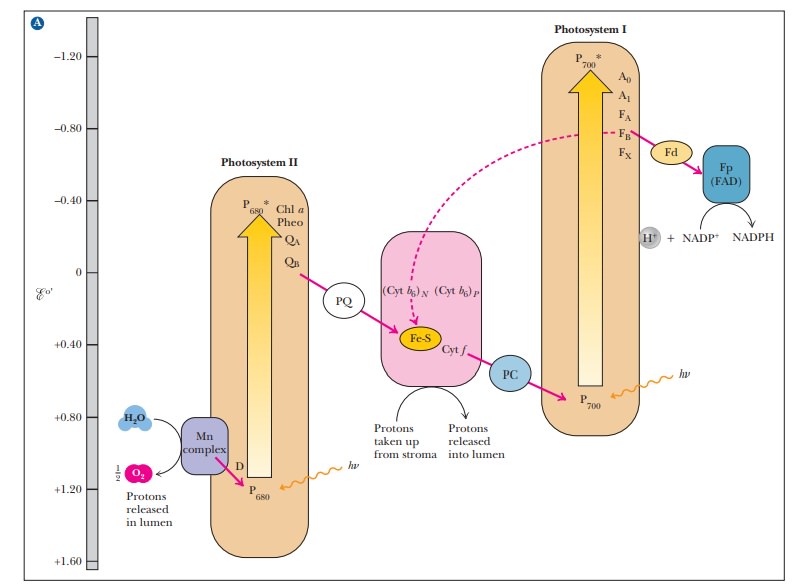 Neither reaction-center chlorophyll is a strong enough reducing agent to pass electrons to the next substance in the reaction sequence, but the absorp-tion of light by the chlorophylls of both photosystems provides enough energy for such reactions to take place. The absorption of light by Chl (P680) allows electrons to be passed to the electron transport chain that links photosystem II and photosystem I and generates an oxidizing agent that is strong enough to split water, producing oxygen. When Chl (P700) absorbs light, enough energy is provided to allow the ultimate reduction of NADP+ to take place. (Note that the energy difference is shown on the vertical axis of Figure 22.6. This type of diagram is also called a Z scheme. The Z is rather lopsided and lies on its side, but the name is common.) In both photosystems, the result of supplying energy (light) is analogous to pumping water uphill.

How does photosystem II split water to produce oxygen?

The electrons released by the oxidation of water are first passed to P680, which is reduced. There are intermediate steps in this reaction because four electrons are required for the oxidation of water, and P680* can accept only one electron at a time. A manganese-containing protein complex and several other protein components are required. The oxygen-evolving complex of photosys-tem II passes through a series of five oxidation states (designated as S0 through S4) in the transfer of four electrons in the process of evolving oxygen (Figure 22.7). One electron is passed from water to PSII for each quantum of light. In the process, the components of the reaction center go successively through oxidation states S1 through S4. The S4 decays spontaneously to the S0 state and, in the process, oxidizes two water molecules to one oxygen molecule. Note that four protons are released simultaneously. The immediate electron donor to the P680 chlorophyll, shown as D in Figure 22.6, is a tyrosine residue of one of the protein components that does not contain manganese. Several quinones serve as intermediate electron transfer agents to accommodate four electrons donated by one water molecule. Redox reactions of manganese also play a role here. Even this mechanism is an oversimplification. Attempts to observe the direct pro-duction of oxygen by the S4 state imply that some intermediate (S4') directly produces oxygen after deprotonation of S3 and loss of an electron by S4. The main point is that the oxygen-evolving complex is very complex indeed. 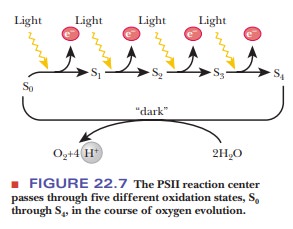 is also referred to as P680. The excited chlorophyll passes an electron to a pri-mary acceptor. In photosystem II, the primary electron acceptor is a molecule of pheophytin (Pheo), one of the accessory pigments of the photosynthetic apparatus. The structure of pheophytin differs from that of chlorophyll only in the substitution of two hydrogens for the magnesium. The transfer of electrons is mediated by events that take place at the reaction center. The next electron acceptor is plastoquinone (PQ). The structure of plastoquinone (Figure 22.8) is similar to that of coenzyme Q (ubiquinone), a part of the respiratory electron transport chain, and plastoquinone serves a very similar purpose in the transfer of electrons and hydrogen ions. 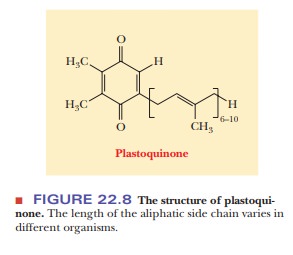 The electron transport chain that links the two photosystems consists of pheo-phytin, plastoquinone, a complex of plant cytochromes (the b6–f complex), a copper-containing protein called plastocyanin (PC), and the oxidized form of P700 (see Figure 22.6). The b6–f complex of plant cytochromes consists of two b - type cytochromes (cytochrome b6) and a c - type cytochrome (cytochromef ).This complex is similar in structure to the bc1 complex in mitochondria and occupies a similar central position in an electron transport chain. This part of the photosynthetic apparatus is the subject of active research. There is a pos-sibility that a Q cycle may operate here as well, and the object of some of this research is to establish definitely whether this is so. In plastocyanin, the copper ion is the actual electron carrier; the copper ion exists as Cu(II) and Cu(I) in the oxidized and reduced forms, respectively. This electron transport chain has another similarity to that in mitochondria, that of coupling to ATP generation.

When the oxidized chlorophyll of P700 accepts electrons from the electron transport chain, it is reduced and subsequently passes an electron to photosys-tem I, which absorbs a second photon of light. Absorption of light by photo-system II does not raise the electrons to a high enough energy level to reduce NADP+; the second photon absorbed by photosystem I provides the needed energy. This difference in energy makes the Z of the Z scheme thoroughly lopsided, but the transfer of electrons is complete.

How does photosystem I reduce NADP+?

The absorption of light by P700 then leads to the series of electron transfer reactions of photosystem I. The substance to which the excited-state chlorophyll, P700*, gives an electron is apparently a molecule of chlorophyll a; this transfer of electrons is mediated by processes that take place in the reaction center. The next electron acceptor in the series is bound ferredoxin, an iron-sulfur protein occurring in the membrane in photosystem I. The bound ferredoxin passes its electron to a molecule of soluble ferredoxin. Soluble ferredoxin in turn reduces an FAD-containing enzyme called ferredoxin-NADP+ reductase. The FAD portion of the enzyme reduces NADP+ to NADPH (Figure 22.6). We can summarize the main features of the process in two equations, in which the notation ferredoxin refers to the soluble form of the protein.

Chl* donates one electron to ferredoxin, but the electron transfer reactions of FAD and NADP+ involve two electrons. Thus, an electron from each of two ferredoxins is required for the production of NADPH.

The net reaction for the two photosystems together is the flow of electrons from H2O to NADP+(see Figure 22.6).