Cyclic Electron Transport in Photosystem I 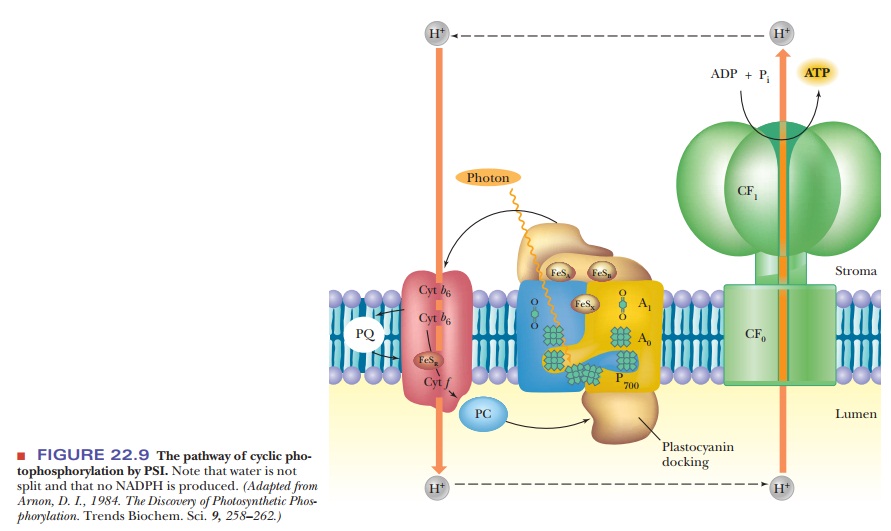 What is known about the structure of photosynthetic reaction centers?

Cyclic Electron Transport in Photosystem I

In addition to the electron transfer reactions just described, it is possible for cyclic electron transport in photosystem I to be coupled to the production of ATP (Figure 22.9). No NADPH is produced in this process. Photosystem II is not involved, and no O2 is generated. Cyclic phosphorylation takes place when there is a high NADPH/NADP+ ratio in the cell: not enough NADP+ is present in the cell to accept all the electrons generated by the excitation of P700. 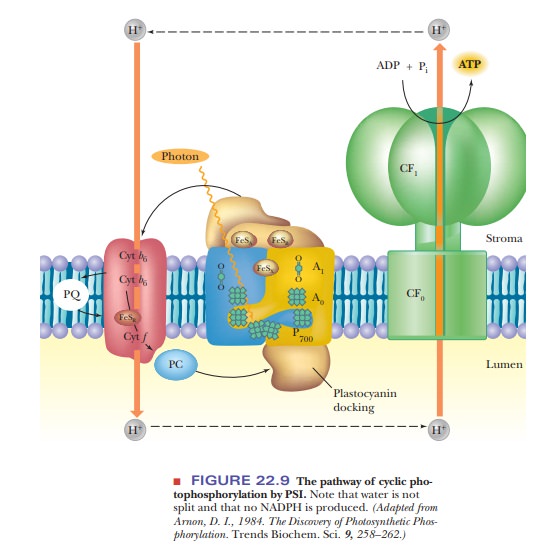 What is known about the structure of photosynthetic reaction centers?

The molecular structure of photosystems is a subject of intense interest to biochemists. The most extensively studied system is that from anaerobic phototropic bacteria of the genus Rhodopseudomonas. These bacteria do not produce molecular oxygen as a result of their photosynthetic activities, but enough similarities exist between the photosynthetic reactions of Rhodopseudomonas and photosynthesis linked to oxygen to lead scientists todraw conclusions about the nature of reaction centers in all organisms. Since the structure of this photosystem was elucidated by X-ray crystallography, the structures of PSI and PSII have also been determined and have been shown to be markedly similar. Consequently, the detailed process that goes on at the reaction center of Rhodopseudomonas is important enough to warrant further discussion.

It is well established that there is a pair of bacteriochlorophyll molecules (designated P870 from the fact that light of 870 nm is the maximum excitation wavelength) in the reaction center of Rhodopseudomonas viridis; the critical pair of chlorophylls is embedded in a protein complex that is in turn an integral part of the photosynthetic membrane. (We shall refer to the bacteriochloro-phylls simply as chlorophylls in the interest of simplifying the discussion.) 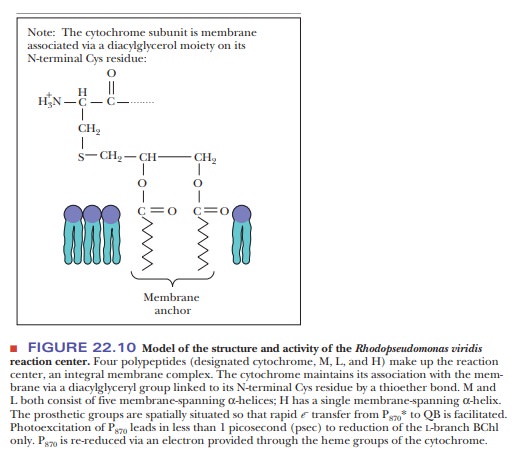 Accessory pigments, which also play a role in the light-trapping process, have specific positions close to the special pair of chlorophylls. The absorption of light by the special pair of chlorophylls raises one of their electrons to a higher energy level (Figure 22.10). This electron is passed to a series of accessory pig-ments. The first of these accessory pigments is pheophytin, which is structurally similar to chlorophyll, differing only in having two hydrogens in place of the magnesium. The electron is passed along to the pheophytin, raising it in turn to an excited energy level. (Note that the electron travels on only one of two possible paths, to one pheophytin but not the other. Research is in progress to determine why this is so.) The next electron acceptor is menaquinone (QA); it is structurally similar to coenzyme Q, which plays a role in the mitochondrial electron transport chain (Figure 22.11). The final electron acceptor, which is also raised to an excited state, is coenzyme Q itself (ubiquinone, called QB here). The electron that had been passed to QB is replaced by an electron donated by a cytochrome, which acquires a positive charge in the process. The cytochrome is not bound to the membrane and diffuses away, carrying its positive charge with it. The whole process takes place in less than 10-3 s. The positive and negative charges have traveled in opposite directions from the chlorophyll pair and are separated from each other. This situation is similar to the proton gradient in mitochondria, where the existence of the proton gradi-ent is ultimately responsible for oxidative phosphorylation.

The separation of charge is equivalent to a battery, a form of stored energy. The reaction center has acted as a transducer, converting light energy to a form usable by the cell to carry out the energy-requiring reactions of photosynthesis. The processes that take place in Rhodopseudomonas serve as a model for reaction centers in photosynthesis linked to oxygen.

The path of electrons in the light reactions of photosynthesis can be con-sidered to have three parts. The first is the transfer of electrons from water to the reaction-center chlorophyll of photosystem II.

The third and last part of the path of the electrons is their transfer from the excited-state chlorophyll of photosystem I to the ultimate electron acceptor NADP+, producing NADPH; again, energy is provided by absorp-tion of a photon of light.