The photosynthetic machinery is constructed from modules

The photosynthetic machinery is constructed from modules

The photosynthetic machinery of bacteria is constructed from defined com-plexes, which also appear as components of the photosynthetic machinery in plants. As will be described, some of these complexes are also components of mitochondrial electron transport. These complexes can be thought of as modules that developed at an early stage of evolu-tion and have been combined in various ways for different purposes. For easier understanding, the functions of these modules in photosynthesis will be treated first asblack boxes and a detailed description of their structure and function will be given later.

Purple bacteria have only one reaction center (Fig. 3.1). In this reac-tion center the energy of the absorbed photon excites an electron, which will be elevated to a negative redox state. The excited electron is transferred back to the ground state by an electron transport chain, called the cyto-chrome-b/c1 complex, and the released energy is transformed to a chemical compound (NADH), which is then used for the synthesis of biomass (e.g., proteins and carbohydrates). Generation of energy is based on coupling the electron transport with the transport of protons across the membrane. In this way the energy of the excited electron is conserved as an electrochemical H+ -potential across the membrane. The photosynthetic reaction cent-ers and the main components of the electron transport chain are always located in a membrane. 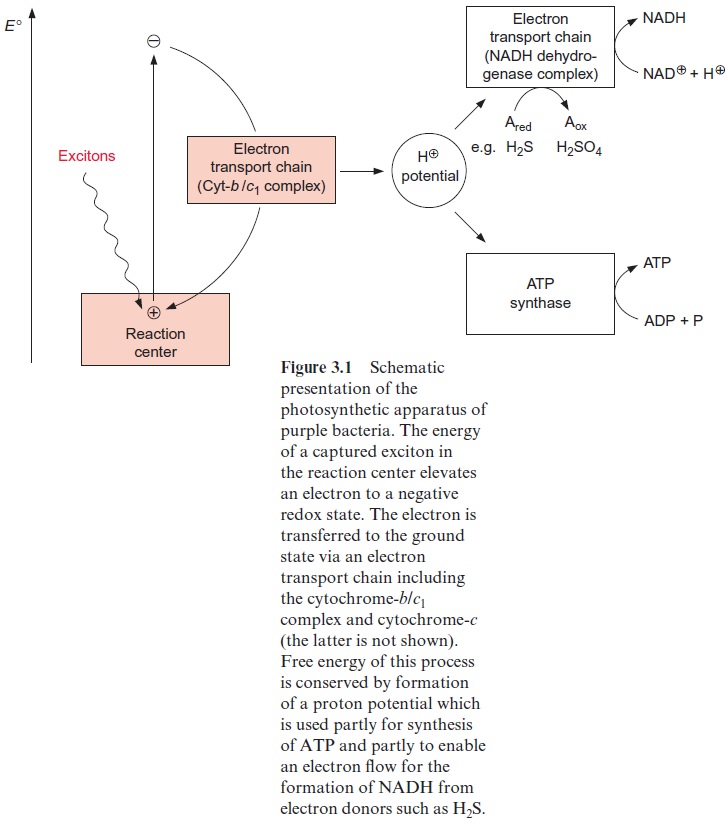 Via ATP-synthase the energy of the H+ -potential is used to synthesize ATP from ADP and phosphate. Since the excited electrons in purple bacte-ria return to the ground state of the reaction center, this electron transport is called cyclic electron transport. In purple bacteria the proton gradient is also used to reduce NAD+ via an additional electron transport chain named the NADH dehydrogenase complex (Fig. 3.1). By consuming the energy of the H+ -potential, electrons are transferred from a reduced compound (e.g., organic acids or hydrogen sulfide) to NAD+ . The ATP and NADH formed by bacterial photosynthesis are used for the synthesis of organic matter; especially important is the synthesis of carbohydrates from CO2 via the Calvin cycle. 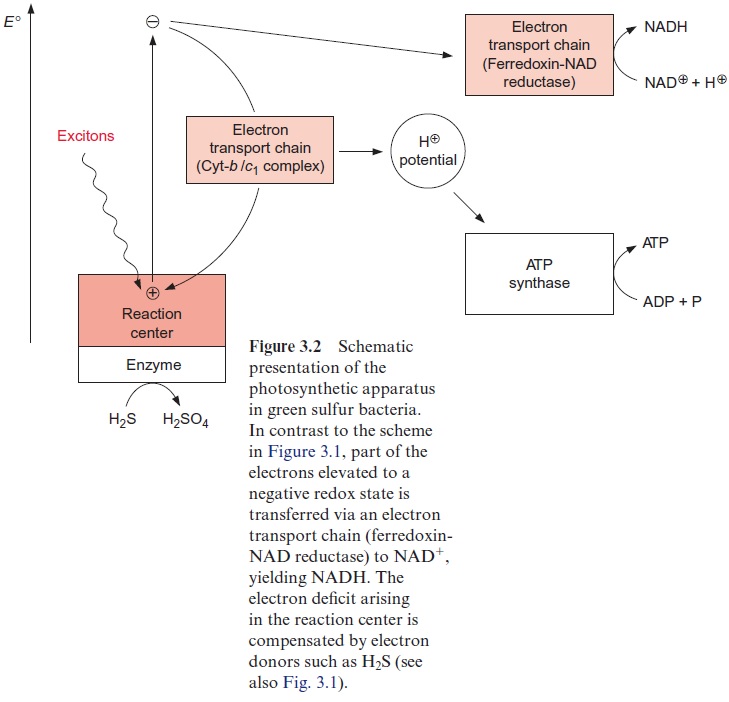 The reaction center of green sulfur bacteria (Fig. 3.2) is homologous to that of purple bacteria, indicating that they have both evolved from a com-mon ancestor. ATP is also formed in green sulfur bacteria by cyclic electron transport. The electron transport chain (cytochrome-b/c1 complex) and the ATP-synthase involved here are very similar to those in purple bacteria. However, in contrast to purple bacteria, green sulfur bacteria are able to synthesize NADH by a noncyclic electron transport process. In this case, the excited electrons are transferred to the ferredoxin-NAD-reductase complex, which reduces NAD+ to NADH. Since the excited electrons in this noncyc-lic pathway do not return to the ground state, an electron deficit remains in the reaction center and is replenished by electron donors such as H2S, ulti-mately being oxidized to sulfate. 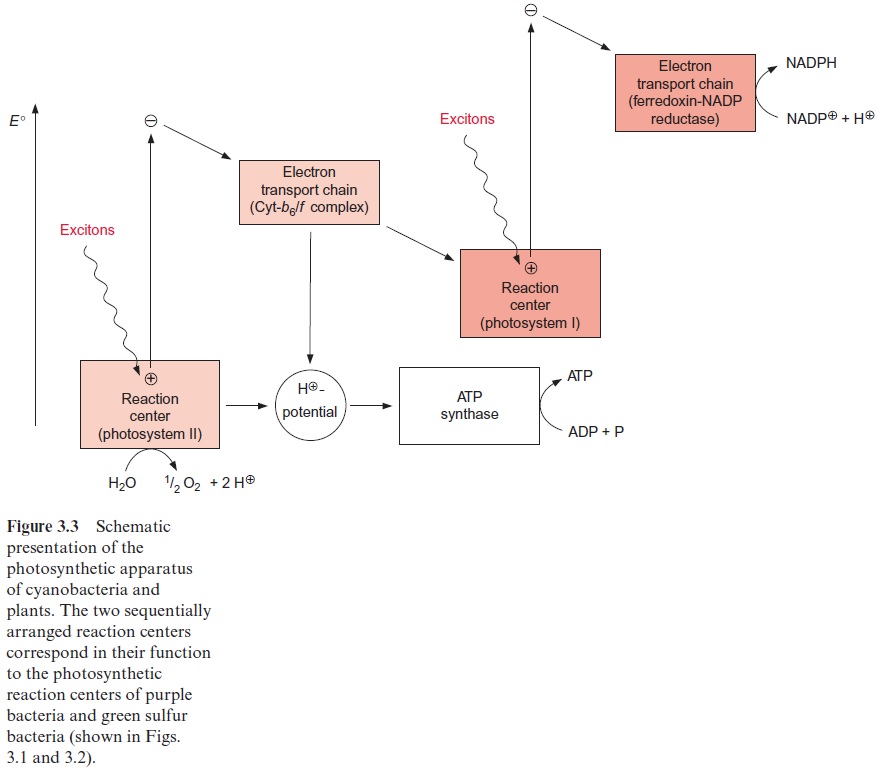 Four excitons are required in oxygenic photosynthesis to split one mol-ecule of water:

In this noncyclic electron transport, electrons are transferred to NADP and protons are transported across the membrane to generate a proton gradient that drives the synthesis of ATP. Thus, for each mol of NADPH formed by oxygenic photosynthesis, about 1.5 molecules of ATP are gener-ated simultaneously. Most of this ATP and NADPH are used for CO2 and nitrate assimilation to synthesize carbohydrates and amino acids. Oxygenic photosynthesis in plants takes place in the chloroplasts, a cell organelle of the plastid family.