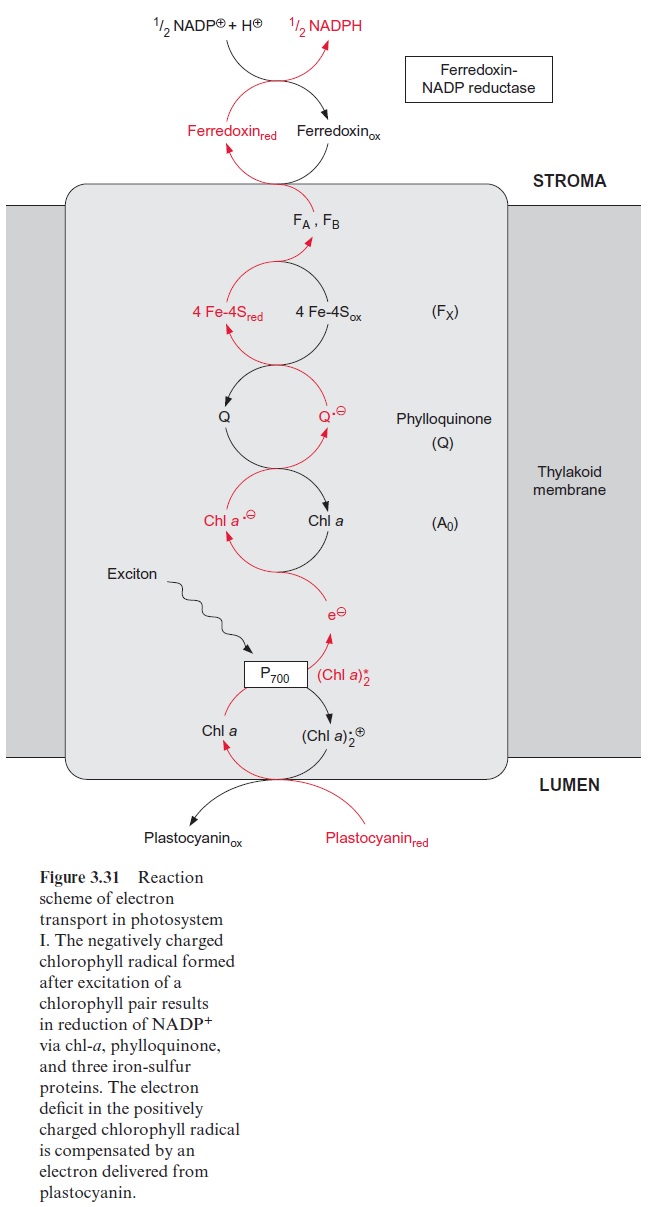 Also the reaction center of PS I with an absorption maximum of 700 nm contains a chlorophyll pair (chl-a)2 (Fig. 3.31). As in PS II, the excitation caused by a photon reacts probably with only one of the two chlorophyll molecules. The resulting (chl-a)2+ • is then reduced by plastocyanin. It is assumed that (chl-a)2 transfers its electron to a chl-a monomer (A0), which then transfers the electron to a strongly bound phylloquinone (Q) (Fig. 3.32). Phylloquinone contains the same phytol side chain as chl-a and its function corresponds to QA in PS II. The electron is transferred from the semiphylloquinone to an iron-sulfur center named FX. FX is a 4Fe-4S center with a very negative redox potential. It transfers one electron to two other 4Fe-4S centers (FA, FB), which in turn reduce ferredoxin, a protein with a molecular mass of 11 kDa with a 2Fe-2S center. Ferredoxin also takes up and transfers only one electron. The reduction occurs at the stromal side of the thylakoid membrane. For this purpose, the ferredoxin binds at a posi-tively charged binding site on subunit D of PS I (Fig. 3.33). The reduction of NADP+ by ferredoxin, catalyzed by ferredoxin-NADP reductase, yields NADPH as an end product of the photosynthetic electron transport.

The PS I complex consists of at least 17 different subunits, of which some are shown in Table 3.4. The center of the PS I complex is a heterodimer (as is the center of PS II) consisting of subunits A and B (Fig. 3.33). The molec-ular masses of A and B (each 82–83 kDa) correspond approximately to the sum of the molecular masses of the PS II subunits D1 and CP43, and D2 and CP47, respectively (Table 3.2). In fact, both subunits A and B have a dou-ble function. Like D1 and D2 in PS II, they bind chromophores (chl-a) and redox carriers (phylloquinone, FeX) of the reaction center and, additionally, they contain about 100 chl-a molecules as antennae pigments. Thus, the het-erodimer of A and B represents the reaction center and the core antenna as well. The three-dimensional structure of photosystem I in cyanobacteria, green algae and plants has been resolved. The principal structure of pho-tosystem I, with a central pair of chl-a molecules and two branches, each with two chlorophyll molecules, is very similar to photosystem II and to the bacterial photosystem (Fig. 3.10). It has not been definitely clarified whether both or just one of these branches are involved in the electron transport. The Fe-S-centers FA and FB are ascribed to subunit C, and subunit F is con-sidered to be the binding site for plastocyanin. 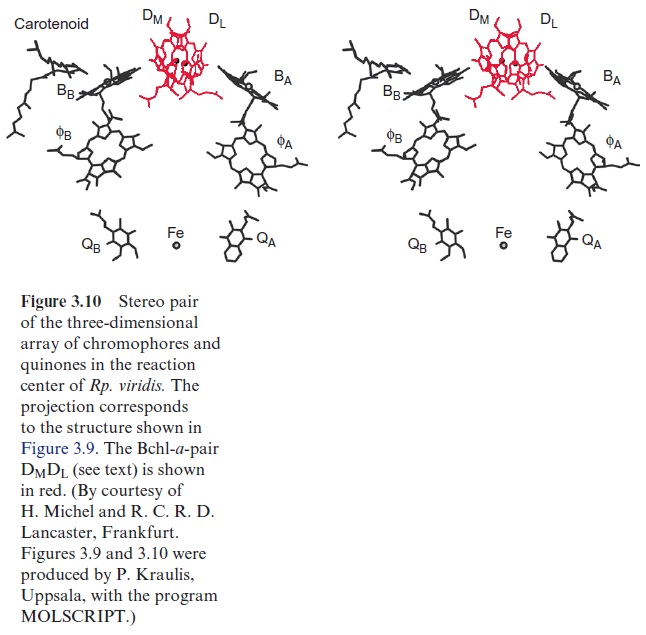 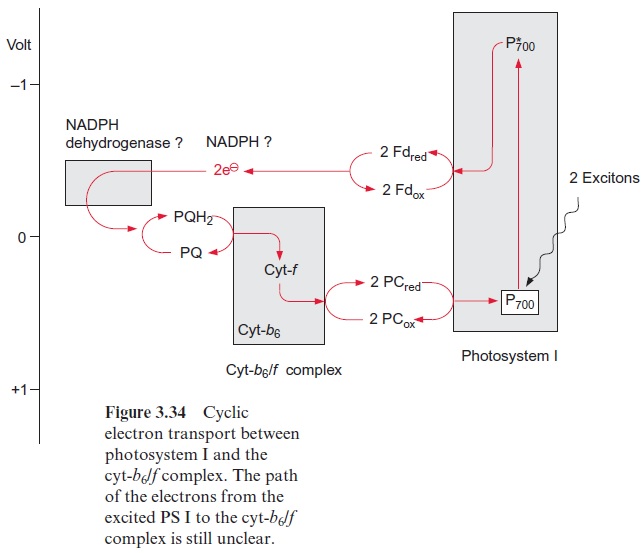 Surprisingly, proteins of the NADP dehydrogenase complex of the mitochondrial respiratory chain  have also been identified in the thylakoid membrane of chloroplasts. The function of these proteins in chloroplasts is still not known. The proteins of this complex occur very fre-quently in chloroplasts from bundle sheath cells of C4 plants, which have little PS II but a particularly high cyclic photophosphorylation activity . These observations raise the possibility that in cyclic electron transport the flow of electrons from NADPH or ferredoxin to plastoqui-none proceeds via a complex similar to the mitochondrial NADH dehydro-genase complex. The mitochondrial NADH dehydrogenase complex transfers electrons from NADH to ubiquinone. Results indicate that an additional pathway for a cyclic electron transport exists in which electrons are directly transferred via a plastoquinone reduct-ase from ferredoxin to plastoquinone.