Chloroplasts, like mitochondria, have their own DNA. Scientists speculate that these organelles were originally cyanobacteria that were engulfed by a eukaryotic cell through endosymbiosis.

Chloroplasts, like mitochondria, have their own DNA. Scientists speculate that these organelles were originally cyanobacteria that were engulfed by a eukaryotic cell through endosymbiosis. Some interesting, even elaborate, interactions have evolved from the interplay of both nuclear and chloroplast genes. There are about 3000 chloroplast proteins, but 95% of them are encoded by nuclear genes.

One of the interesting interactions involves rubisco, the prin-cipal enzyme of CO2 fixation. The large subunit of this enzyme is coded by a chloroplast gene, and the small subunit by a nuclear gene. Mechanisms not yet understood must coordinate the two syntheses to ensure equimolar production of both subunits.

The nuclear gene is translated in the cytoplasm, and the protein is then transported to the chloroplast, protected by a chaperonin, via targeting mechanisms. Special targeting sequences are used to direct various nuclear products to the appropriate chloroplast location, using reactions that require ATP hydrolysis. The chaperonin aids in formation of the final, active complex.

The chloroplast encodes its own RNA polymerase, ribo-somal and transfer RNAs, and about one-third of the ribosomal proteins.

The DNA polymerase, aminoacyl synthetases, and the rest of the ribosomal proteins come from the nuclear genes. Different nuclear genes may be used for chloroplasts in different, special-ized tissues of the plant. In different classes of plants, differ- ent genes are coded by the nucleus, even though all the same proteins constitute the chloroplast. The sequences of many of these enzymes encoded in the nucleus resemble those found in bacteria more than the sequences of proteins encoded by other nuclear genes. The chloroplast rRNAs likewise resemble bacte-rial rRNAs. The four subunits of the chloroplast-coded RNA polymerase are homologous to the four subunits of bacterial RNA polymerase. Furthermore, the chloroplast mRNA uses a Shine-Dalgarno sequence to bind to the ribosome, and it does not have a cap or a poly-A tail. These observations are definitely consistent with the idea that the chloroplast (and mitochondri-on) originated from bacteria-like organisms, symbiotically taken into early cells, with some subsequent transfer of the organelle genes to the nucleus. 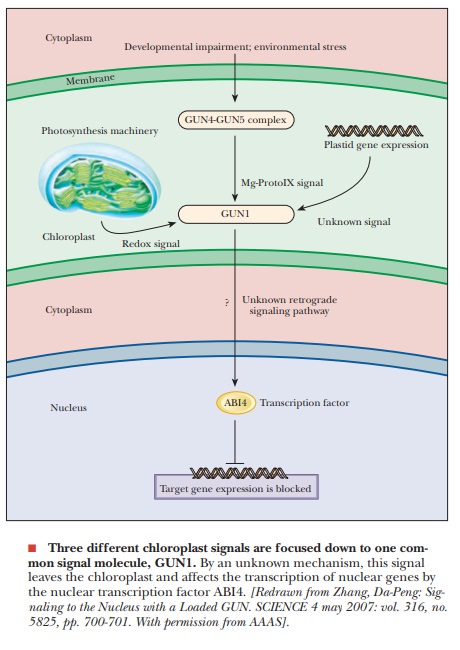 The separation of genetic material between the nucleus and the chloroplast requires a coordination of the transcription of genes in two different locations. How plant cells are able to accomplish this is an active research area. It is now known that there are communications in both directions between the two organelles. A signal proceeding from the nucleus to the chloro-plast is considered the more ÒnormalÓ pathway and is referred to as anterograde signaling. When the signal goes from another organelle to the nucleus, it is called retrograde signaling. Recently, three different retrograde signaling processes were discovered in algae and higher plants.

The most-studied is signaling by Mg-protoporphyrin IX, a tetrapyrrole generated during chlorophyll biosynthesis. Also studied are signals coming from the expression of chloroplast genes and those from the photosynthetic electron transport chain (PET). Stress signals and developmental impairment from the cytosol increase the levels of another set of related proteins, GUN4 and GUN5. These three retrograde systems have been shown to act through a GUN1 (genomes uncoupled 1), which is a member of a large family of enigmatic transcription factors in higher plants. It has been shown that all three signal pathways affect the level of GUN1 in the chloroplast (see the figure). It is currently unknown how the GUN1 signal makes its way to the nucleus. However, in the nucleus, the effect is to increase a transcription factor called ABI4 (abscisic acid insensitive 4), which then inhibits transcription of targeted nuclear genes involved in chloroplast metabolism. This common pathway focused to the GUN1 protein allows the smooth coordination of the nuclear part of chloroplast metabolism in response to many environmental signals.