The actual storage form of the carbohydrates produced from carbon dioxide by photosynthesis is not glucose but disaccharides (e.g., sucrose in sugarcane and sugar beets) and polysaccharides (starch and cellulose).

The actual storage form of the carbohydrates produced from carbon dioxide by photosynthesis is not glucose but disaccharides (e.g., sucrose in sugarcane and sugar beets) and polysaccharides (starch and cellulose). However, it is customary and convenient to write the carbohydrate product as glucose, and we shall follow this time-honored practice.

Carbon dioxide fixation takes place in the stroma. The equation for the overall reaction, like all equations for photosynthetic processes, is deceptively simple. 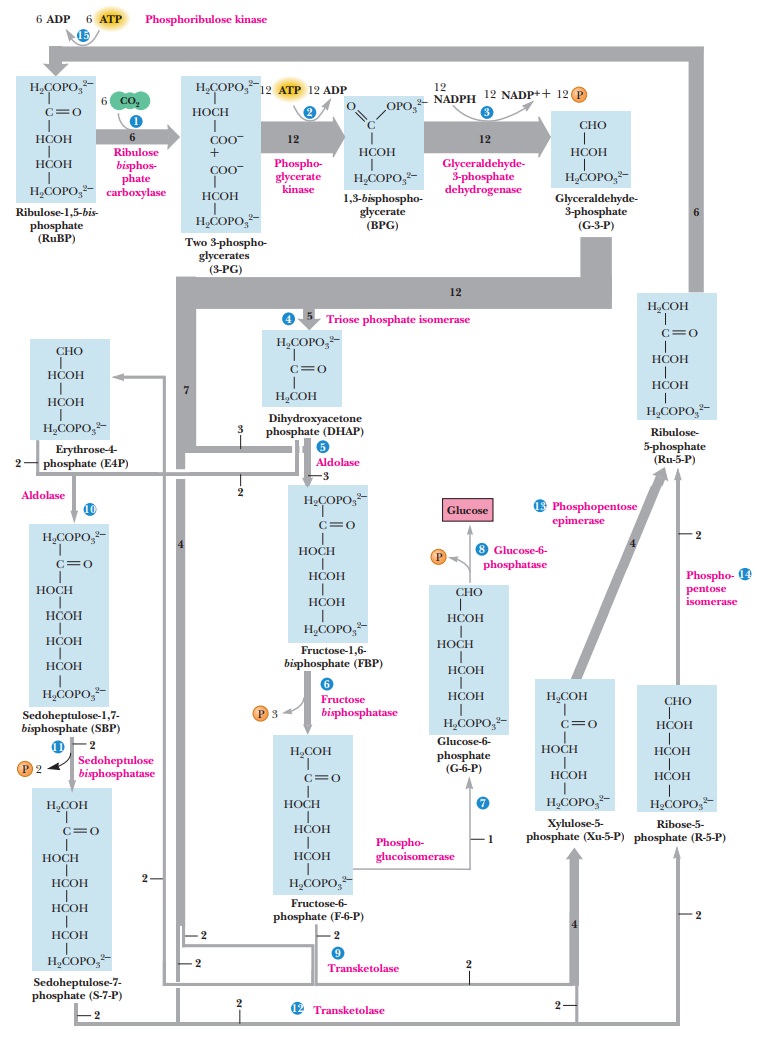 What is the Calvin cycle?

The Þrst reaction of the Calvin cycle is the condensation of ribulose-1,5-bisphosphate with carbon dioxide to form a six-carbon intermediate, 2-carboxy-3-ketoribitol-1,5-bisphosphate, which quickly hydrolyzes to give two molecules of 3-phosphoglycerate (Figure 22.16). The reaction is catalyzed by the enzyme ribulose-1,5-bisphosphate carboxylase/oxygenase (rubisco).This enzyme is locatedon the stromal side of the thylakoid membrane and is probably one of the most abundant proteins in nature, as it accounts for about 15% of the total protein in chloroplasts. The molecular weight of ribulose-1,5-bisphosphate carboxylase/ oxygenase is about 560,000, and it consists of eight large subunits (molecular weight 55,000) and eight small subunits (molecular weight 15,000) (Figure 22.17). The sequence of the large subunit is encoded by a chloroplast gene, and that of the small subunit is encoded by a nuclear gene. 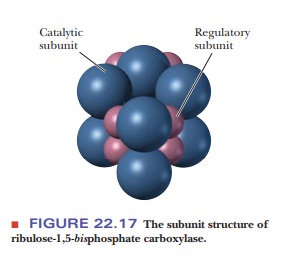 The endosymbiotic theory for the development of eukaryotes is consistent with the idea of independent genetic material in organelles. The large subunit (chloroplast gene) is catalytic, whereas the small subunit (nuclear gene) plays a regulatory role, an observation that is consistent with an endosymbiotic origin for organelles such as chloroplasts. 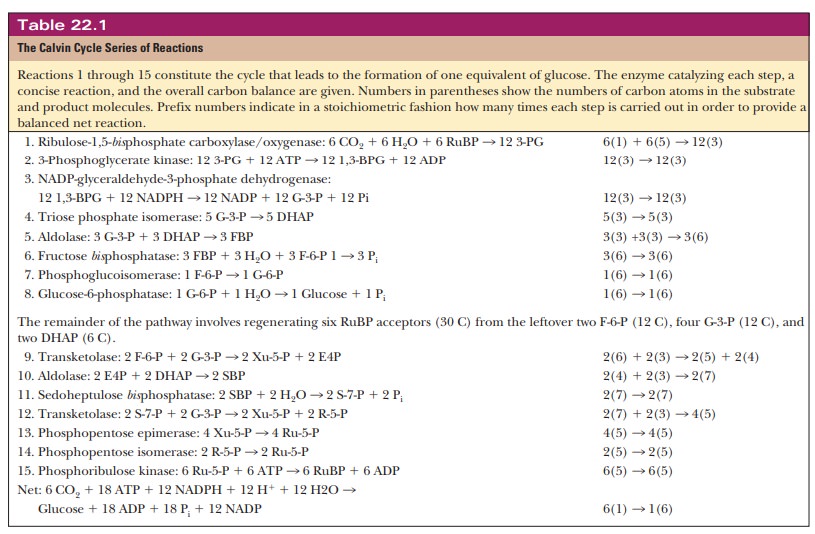 How is starting material regenerated in the Calvin cycle?

Most of the reactions of the reshuffling process are the same as ones we have already seen as part of the pentose phosphate pathway. Consequently, we shall concentrate just on the main outline of the process later because the results are summarized in Figure 22.15 and Table 22.1. Reactions catalyzed in turn by transketolase, aldolase, and sedoheptulose bisphosphatase (Reactions 9 through 12 in Table 22.1) are the reactions of rearrangement of carbon skeletons in the reshuffling phase of the Calvin cycle.

Taking these points into consideration, we arrive at the net equation for the path of carbon in photosynthesis.

In the dark reactions of photosynthesis, the fixation of carbon dioxide takes place when the key intermediate ribulose-1,5-bisphosphate reacts with carbon dioxide to produce two molecules of 3-phosphoglycerate. This reaction is catalyzed by the enzyme ribulose-1,5-bisphosphate carbox-ylase/oxygenase (rubisco), one of the most abundant proteins in nature.

The remainder of the dark reaction is the regeneration of ribulose-1,5-bisphosphate in the Calvin cycle.