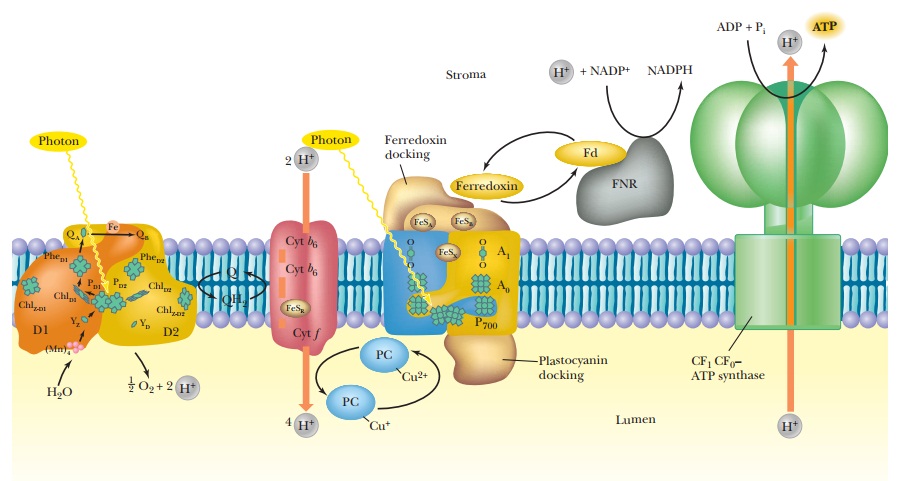 How does ATP production in chloroplasts resemble the process in mitochondria?

We saw that a proton gradient across the inner mitochondrial membrane drives the phosphorylation of ADP in respiration. The mechanism of photophosphorylation is essentially the same as that of the production of ATP in the respiratory electron transport chain. In fact, some of the strongest evidence for the chemiosmotic coupling of phosphorylation to electron transport has been obtained from experiments on chloroplasts rather than mitochondria. Chloroplasts can synthesize ATP from ADP and Piin the dark if they are provided with a pH gradient. 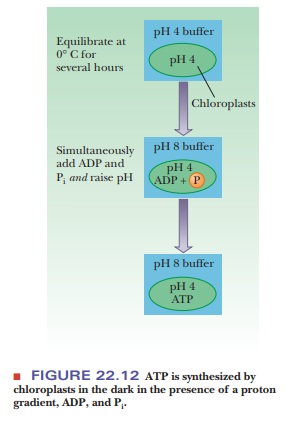 If isolated chloroplasts are allowed to equilibrate in a pH 4 buffer for several hours, their internal pH will be equal to 4. If the pH of the buffer is raised rapidly to 8 and if ADP and Pi are added simultaneously, ATP will be produced (Figure 22.12). The production of ATP does not require the presence of light; the proton gradient produced by the pH difference supplies the driving force for phosphorylation. This experiment provides solid evidence for the chemios-motic coupling mechanism.

How does ATP production in chloroplasts resemble the process in mitochondria?

Several reactions contribute to the generation of a proton gradient in chloroplasts in an actively photosynthesizing cell. The oxidation of water releases H+ into the thylakoid space. Electron transport from photosystem II and photosystem I also helps create the proton gradient by involving plastoquinone and cytochromes in the process. Then photosystem I reduces NADP+ by using H+ in the stroma to produce NADPH. As a result, the pH of the thylakoid space is lower than that of the stroma (Figure 22.13). The ATP synthase in chloroplasts is similar to the mitochondrial enzyme; in particular, it consists of two parts, CF1 and CF0, where the C serves to distinguish them from their mitochondrial counterparts, F1 and F0, respectively. Evidence exists that the components of the electron chain in chloroplasts are arranged asymmetrically in the thylakoid membrane, as is the case in mitochondria. An important consequence of this asymmetrical arrangement is the release of the ATP and NADPH produced by the light reaction into the stroma, where they provide energy and reducing power for the dark reaction of photosynthesis. 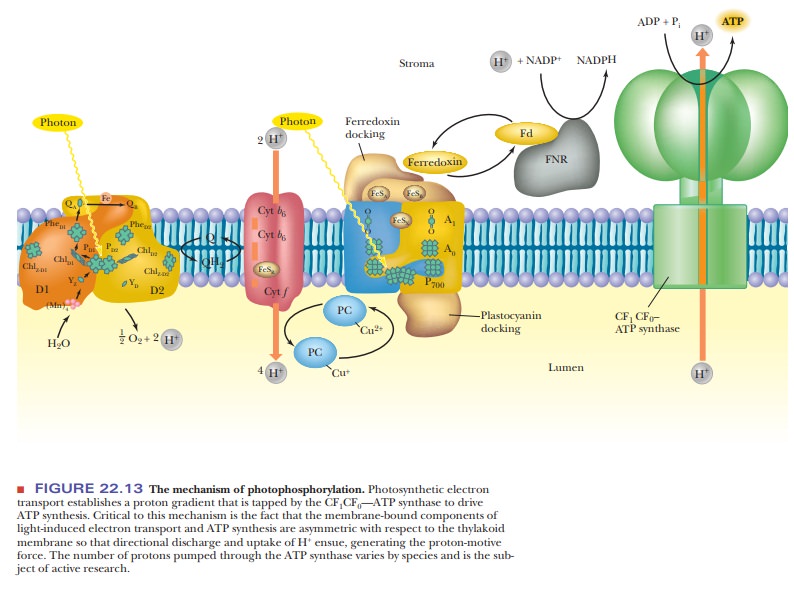