Pascal's law and effect of gravity 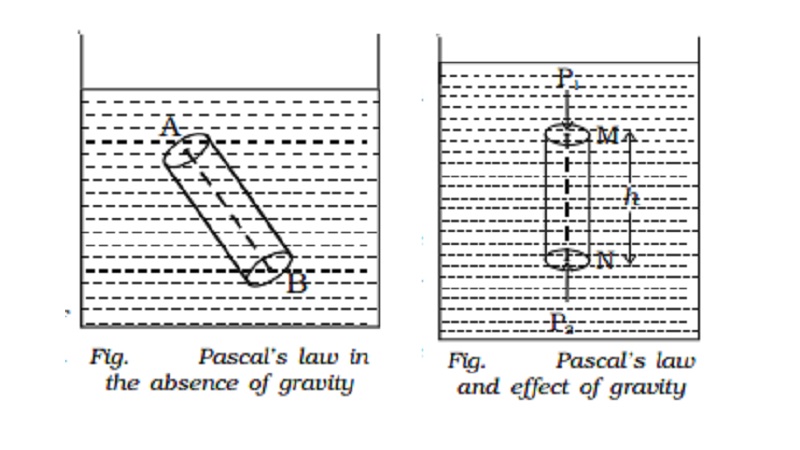 One of the most important facts about fluid pressure is that a change in pressure at one part of the liquid will be transmitted without any change to other parts. This was put forward by Blaise Pascal (1623 - 1662), a French mathematician and physicist. This rule is known as Pascal's law.

One of the most important facts about fluid pressure is that a change in pressure at one part of the liquid will be transmitted without any change to other parts. This was put forward by Blaise Pascal (1623 - 1662), a French mathematician and physicist. This rule is known as Pascal's law.

Pascal's law states that if the effect of gravity can be neglected then the pressure in a fluid in equilibrium is the same everywhere. 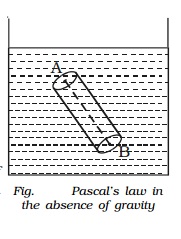 Consider any two points A and B inside the fluid. Imagine a cylinder such that points A and B lie at the centre of the circular surfaces at the top and bottom of the cylinder (Fig.). Let the fluid inside this cylinder be in equilibrium under the action of forces from outside the fluid. These forces act everywhere perpendicular to the surface of the cylinder. The forces acting on the circular, top and bottom surfaces are perpendicular to the forces acting on the cylindrical surface. Therefore the forces acting on the faces at A and B are equal and opposite and hence add to zero. As the areas of these two faces are equal, we can conclude that pressure at A is equal to pressure at B. This is the proof of Pascal's law when the effect of gravity is not taken into account.

Pascal's law and effect of gravity

When gravity is taken into account, Pascal's law is to be modified. Consider a cylindrical liquid column of height h and density ρ in a vessel as shown in the Fig.. 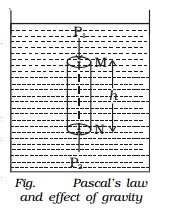 If the effect of gravity is neglected, then pressure at M will be equal to pressure at N. But, if force due to gravity is taken into account, then they are not equal.

(i) Force P1A acting vertically down on the top surface.

(iii) Force P2A at the bottom surface acting vertically upwards. where P1 and P2 are the pressures at the top and bottom faces, A is the area of cross section of the circular face and m is the mass of the

This equation proves that the pressure is the same at all points at the same depth. This results in another statement of Pascal's law which can be stated as change in pressure at any point in an enclosed fluid at rest is transmitted undiminished to all points in the fluid and act in all directions.

An important application of Pascal's law is the hydraulic lift used to lift heavy objects. A schematic diagram of a hydraulic lift is shown in the Fig.. It consists of a liquid container which has pistons fitted into the small and large opening cylinders. If a1 and a2 are the areas of the pistons A and B respectively, F is the force applied on A and W is the load on B, then

This is the load that can be lifted by applying a force F on A. In the above equation 2 a1/a2  is called mechanical advantage of the hydraulic lift. One can see such a lift in many automobile service stations 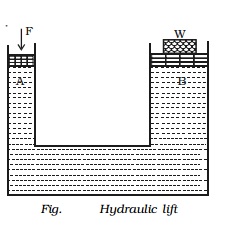 When brakes are applied suddenly in a moving vehicle, there is every chance of the vehicle to skid because the wheels are not retarded uniformly. In order to avoid this danger of skidding when the brakes are applied, the brake mechanism must be such that each wheel is equally and simultaneously retarded. A hydraulic brake serves this purpose. It works on the principle of Pascal's law. 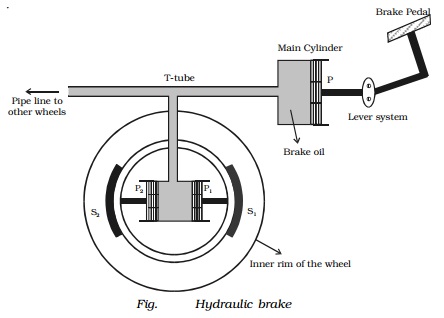 When the brake pedal is pressed, piston P is pushed due to the lever assembly operation. The pressure in the main cylinder is transmitted to P1 and P2. The pistons P1 and P2 push the brake shoes away, which in turn press against the inner rim of the wheel. Thus the motion of the wheel is arrested. The area of the pistons P1 and P2 is greater than that of P. Therefore a small force applied to the brake pedal produces a large thrust on the wheel rim.