Malaria is the most important parasitic disease of humans and causes hundreds of millions of illnesses per year.

Malaria is the most important parasitic disease of humans and causes hundreds of millions of illnesses per year. Four species of plasmo-dium typically cause human malaria: Plasmodium falciparum,vivax, P malariae, and P ovale. A fifth species, P knowlesi, is pri-marily a pathogen of monkeys, but has recently been recognized to cause illness, including severe disease, in humans in Asia. Although all of the latter species may cause significant illness, P falciparum is responsible for the majority of serious complications and deaths. Drug resistance is an important therapeutic problem, most notably with P falciparum.

An anopheline mosquito inoculates plasmodium sporozoites to initiate human infection (Figure 52–1). Circulating sporozoites rapidly invade liver cells, and exoerythrocytic stage tissue schizonts mature in the liver. Merozoites are subsequently released from the liver and invade erythrocytes. Only erythrocytic parasites cause clinical illness. Repeated cycles of infection can lead to the infec-tion of many erythrocytes and serious disease. Sexual stage game-tocytes also develop in erythrocytes before being taken up by mosquitoes, where they develop into infective sporozoites. 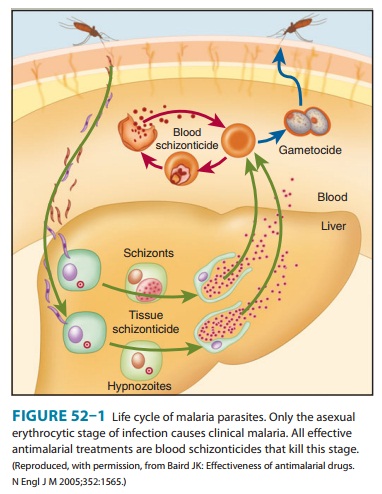