Mefloquine is effective therapy for many chloroquine-resistant strains of P falciparum and against other species.

Mefloquine hydrochloride is a synthetic 4-quinoline methanol that is chemically related to quinine. It can only be given orally because severe local irritation occurs with parenteral use. It is well absorbed, and peak plasma concentrations are reached in about 18 hours. Mefloquine is highly protein-bound, extensively distrib-uted in tissues, and eliminated slowly, allowing a single-dose treat-ment regimen. The terminal elimination half-life is about 20 days, allowing weekly dosing for chemoprophylaxis. With weekly dos-ing, steady-state drug levels are reached over a number of weeks; this interval can be shortened to 4 days by beginning a course with three consecutive daily doses of 250 mg, although this is not stan-dard practice. Mefloquine and acid metabolites of the drug are slowly excreted, mainly in the feces. The drug can be detected in the blood for months after the completion of therapy.

Mefloquine is effective in prophylaxis against most strains of P falciparum and probably all other human malarial species.Mefloquine is therefore among the drugs recommended by the CDC for chemoprophylaxis in all malarious areas except for those with no chloroquine resistance (where chloroquine is preferred) and some rural areas of Southeast Asia with a high prevalence of mefloquine resistance. As with chloroquine, eradication of P vivax and P ovale requires a course of primaquine.

Mefloquine is effective in treating most falciparum malaria. The drug is not appropriate for treating individuals with severe or complicated malaria, since quinine, quinidine, and artemisinins are more rapidly active, and since drug resistance is less likely with those agents. The combination of artesunate plus mefloquine showed excellent antimalarial efficacy in regions of Southeast Asia with some resistance to mefloquine, and this regimen is now oneof the combination therapies recommended by the WHO for the treatment of uncomplicated falciparum malaria (Table 52–4). Artesunate-mefloquine is the first-line therapy for uncomplicated malaria in a number of countries in Asia and South America. 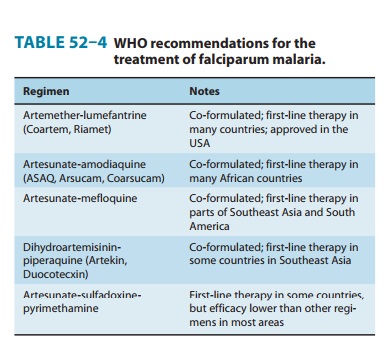 Weekly dosing with mefloquine for chemoprophylaxis may cause nausea, vomiting, dizziness, sleep and behavioral disturbances, epigastric pain, diarrhea, abdominal pain, headache, rash, and diz-ziness. Neuropsychiatric toxicities have received a good deal of publicity, but despite frequent anecdotal reports of seizures and psychosis, a number of controlled studies have found the fre-quency of serious adverse effects from mefloquine to be no higher than that with other common antimalarial chemoprophylactic regimens. Leukocytosis, thrombocytopenia, and aminotransferase elevations have been reported.

The latter adverse effects are more common with the higher dosages required for treatment. These effects may be lessened by administering the drug in two doses separated by 6–8 hours. The incidence of neuropsychiatric symptoms appears to be about ten times more common than with chemoprophylactic dosing, with widely varying frequencies of up to about 50% being reported. Serious neuropsychiatric toxicities (depression, confusion, acute psychosis, or seizures) have been reported in less than 1 in 1000 treatments, but some authorities believe that these toxicities are actually more common. Mefloquine can also alter cardiac conduc-tion, and arrhythmias and bradycardia have been reported.

Mefloquine is contraindicated in a patient with a history of epi-lepsy, psychiatric disorders, arrhythmia, cardiac conduction defects, or sensitivity to related drugs. It should not be co-administered with quinine, quinidine, or halofantrine, and caution is required if quinine or quinidine is used to treat malaria after mefloquine chemoprophylaxis. Theoretical risks of mefloquine must be bal-anced with the risk of contracting falciparum malaria. The CDC no longer advises against mefloquine use in patients receiving β-adrenoceptor antagonists. Mefloquine is also now consideredsafe in young children. Available data suggest that mefloquine is safe throughout pregnancy, although experience in the first trimes-ter is limited. An older recommendation to avoid mefloquine use in those requiring fine motor skills (eg, airline pilots) is controver-sial. Mefloquine chemoprophylaxis should be discontinued if sig-nificant neuropsychiatric symptoms develop.