When patients are counseled on the prevention of malaria, it is imperative to emphasize measures to prevent mosquito bites (eg, with insect repellents, insecticides, and bed nets).

When patients are counseled on the prevention of malaria, it is imperative to emphasize measures to prevent mosquito bites (eg, with insect repellents, insecticides, and bed nets), because parasites are increasingly resistant to multiple drugs and no chemoprophy-lactic regimen is fully protective. Current recommendations from the Centers for Disease Control and Prevention (CDC) include the use of chloroquine for chemoprophylaxis in the few areas infested by only chloroquine-sensitive malaria parasites (princi-pally the Caribbean and Central America west of the Panama Canal), mefloquine or Malarone∗ for most other malarious areas, and doxycycline for areas with a very high prevalence of multidrug-resistant falciparum malaria (principally border areas of Thailand) (Table 52–2). CDC recommendations should be checked regularly (Phone: 770-488-7788; Internet: http://www.cdc.gov/malaria), because these may change in response to changing resistance patterns and increasing experience with new drugs. In some circumstances, it may be appropriate for travelers to carry supplies of drugs with them in case they develop a febrile illness when medical attention is unavailable. Regimens for self-treatment include new artemisinin-based combination therapies ,which are widely available internationally (and, in the case of Coartem∗∗, in the USA); Malarone; mefloquine; and quinine. Most authorities do not recommend routine terminal chemopro-phylaxis with primaquine to eradicate dormant hepatic stages of P vivax and P ovale after travel, but this may be appropriate insome circumstances, especially for travelers with major exposure to these parasites. 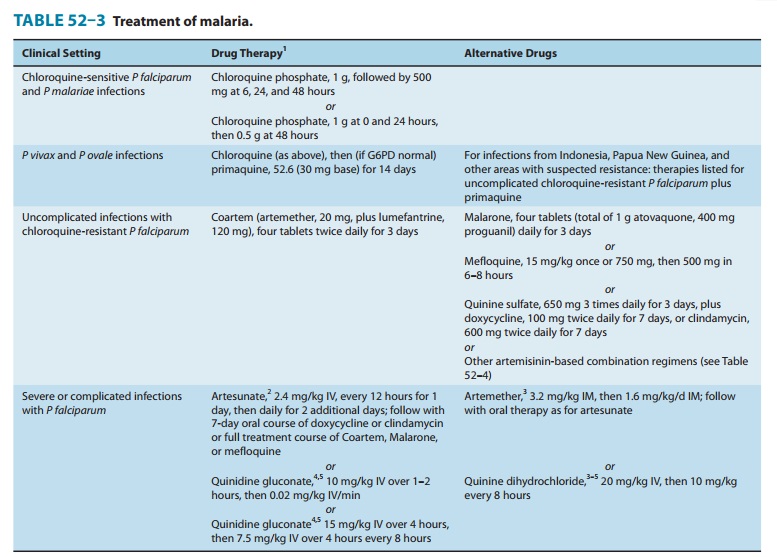